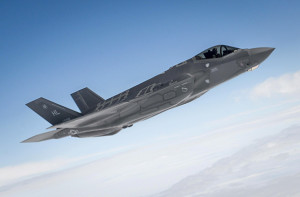 A U.S. Air Force F-35A Lightning II aircraft assigned to Hill Air Force Base, Utah, prepares to be refueled by a 459th Air Refueling Wing KC-135 Stratotanker during a flight to Graf Ignatievo Air Base, Bulgaria, April 28, 2017. Eight F-35s deployed to RAF Lakenheath, England on April 15 and two forward deployed to Bulgaria for a brief time which allowed the F-35s to engage in familiarization training within the European theater while reassuring allies and partners of U.S. dedication to the enduring peace and stability of the region. The F-35s are assigned to the 34th Fighter Squadron and are supported by total force Airmen from the 388th Fighter Wing, and the Air Force Reserve’s 466th Fighter Squadron, 419th Fighter Wing, Hill Air Force Base, Utah.

“The F-35A brings an unprecedented combination of lethality, survivability and adaptability to joint and combined operations, and is ready to deploy and strike well defended targets anywhere on Earth,” said Gen. David Goldfien, U.S. Air Force Chief of Staff, in a statement last year when the aircraft was declared combat ready.

With the impending delivery to the European theater, the F-35 represents a new model of international cooperation, ensuring U.S. and coalition partner security well into the 21st Century. The F-35 also brings together strategic international partnerships, providing affordability by reducing redundant research and development and providing access to technology around the world. Along these lines, the F-35 will employ a variety of U.S. and allied weapons.

Remaining conscientious of each countries security sensitivities, the symposium was a venue for each country to bring topics for discussion and determine how others can use them. The group also discussed different tactics, techniques and procedures for training with hopes of keeping the program evolving.

“We’ve got to keep working alongside each other to make gains,” said Gen. Tod D. Wolters, U.S. Air Forces in Europe – Air Forces Africa commander during opening remarks. “If we don’t change, we’ll lose. Global security is our job and what we do.”

According to Wolters, the security disposition within the European theater has changed for the better in the past fiscal year in comparison to previous years, a point he also made in the F-35 Leadership Symposium in July.

“We’re taking those good ideas and we’re nesting them under that thought process to where we could elevate our command and control to a point that from a comprehensive perspective – we’re better,” he said. “At the end of the day, if we can say that this is something we’re fusing into the system that guarantees the sovereignty of the skies overhead our NATO nations and our great partners, then we’re in a great place.”

“We have identified a way forward to coordinate and work together as a team to find solutions for interoperability and training,” said Col. Chris Yancy, USAFE-AFAFRICA Plans, Programs and Analysis deputy director. “This program and this aircraft is a quantum leap above any other technology that we’ve had before. The program is much larger, much more complex and much more unique than our previous airframes.”

The introduction of the premier fifth-generation fighter to the European area of responsibility brings with it state-of-the-arts sensors, interoperability, and a broad array of advanced air-to-air and air-to-surface munitions that will help maintain the fundamental sovereignty rights of all nations.