Whenever the Global Hawk begins a mission, it has to travel through a certain area of the atmosphere that, under certain conditions, can create ice on the aircraft, adding weight and aerodynamic drag.

A cloud deck from about 8,000 feet to 22,000 feet is the main concern for the Global Hawk, according to project engineer Jonny Kim, Global Vigilance Combined Test Force at Edwards Air Force Base, Calif.

According to Maj. Ryan Finlayson, test pilot with the Global Vigilance CTF, the ice only forms for about five minutes on the way up, and again on the way down through this cloud deck.

To assure that these variables will not negatively impact the Global Hawk’s role, members of the Global Vigilance Combined Test Force here are testing the aircraft in a unique way.

Rather than wait for the right weather conditions, the formation of the cloud deck, technology was used to design 3-D printed nylon attachments to mimic the ice that would form on the aircraft during ascent and descent.

“This was a first-of-type testing done here at Edwards.  No other program or CTF has accomplished icing testing in this manner,” said Lt. Col. Cory Naddy, director of the Global Vigilance CTF. He said the combination of the testing techniques and the fact that this is an autonomous unmanned air vehicle made the testing high risk by wing standards, and required significant effort behind the scenes in the CTF.

“We actually had the aircraft take off with the equivalent of light time icing on the wings and tail — something that no other aircraft would normally do,” Naddy said.  “From the moment we lifted off, we were operating in an envelope that was unproven and many risk factors were at play.” 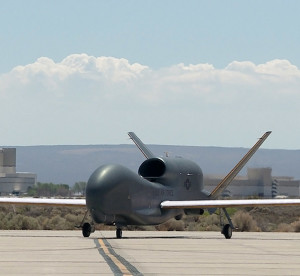 A Global Hawk remotely piloted vehicle taxis on the Edwards Air Force Base, Calif., flightline during an icing test mission. The aircraft was fitted with a 3-D printed nylon structure to duplicate the weight and drag of ice forming on wings and tail.

The director explained they had models for predictions, but that was it.  “Due to thorough preparation by the team, those models were done conservatively and the aircraft performed better than initially expected,” he said.

As project engineer, Kim is new to the flight testing world. “This is my first real job,” he said. “I just graduated from Cal Poly Pomona and was brought on to tackle this project.” Being fairly inexperienced, he had to learn about what icing on aircraft entailed by researching previous studies. “Reports and analyses by NASA and Northrop were great resources and a tremendous help.”

These forms were then attached to the leading edges of the wings and ruddervators (the tailfins) of a Global Hawk.

Before the aircraft was ever flown, the team modeled the shapes and performed wind-tunnel testing. Since the Global Hawk is an unmanned aircraft, accuracy of the flight tests were even more important. “We had to get it right the first time,” Finlayson said. “The (Global Hawk) pilot controls a lot, but not the flight controls.”

Once ground tests were completed, the CTF prepare the aircraft for actual flight testing. The aircraft was flown with different fuel loads, first with a medium load and then two more flights with heavy fuel loads.

“We started at lower altitudes and worked our way up.” Maj. Finlayson.

The pilot said these tests may not lift any flight restrictions on the Global Hawk, but they do open the door. “We’ve shown that the aircraft is flyable if it picks up a bit of ice,” he said.

Kim said making this project happen required plenty of teamwork. Other agencies involved included the Global Hawk System Program Office, Northrop Grumman Corp., Air Force Test Center Safety, and many technical experts. “This project brought the best out of everyone I worked with,” Kim said. “It was very demanding, but I enjoy fast-paced high pressure work.”

The simulated ice was made using a process called selective laser sintering (SLS). According to Kim, the process uses a bed of powder, and a laser solidifies the powder to create shapes. Sintering can be done with several materials, including glass, metal and nylon. “SLS allows for complex geometries without support structures and produces parts that are air and water-tight, heat resistant, and strong. This production process effectively saves time and money,” Kim said.