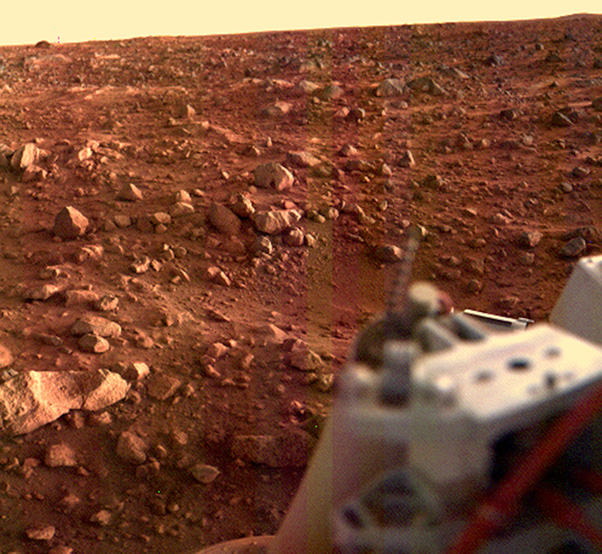 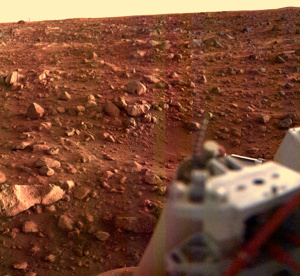 This major milestone represented the first time the United States successfully landed a vehicle on the surface of Mars, collecting an overwhelming amount of data that would soon be used in future NASA missions.

Upon touchdown, Viking 1 took its first picture of the dusty and rocky surface and relayed the historic image back to Earthlings eagerly awaiting its arrival. Viking 1, and later Viking Orbiter 2, collected an abundance of high-resolution imagery and scientific data, blazing a trail that will one day take humans to Mars.

This color image of the Martian surface in the Chryse area was taken by Viking Lander 1, looking southwest, about 15 minutes before sunset on the evening of Aug. 21. The sun is at an elevation angle of 3 or 4 degrees above the horizon and about 50 degrees clockwise from the right edge of the frame. Local topographic features are accentuated by the low lighting angle. A depression is seen near the center of the picture, just above the Lander’s leg support structure, which was not evident in previous pictures taken at higher sun angles. Just beyond the depression are large rocks about 30 centimeters (1 foot) across. The diffuse shadows are due to the sunlight that has been scattered by the dusty Martian atmosphere as a result of the long path length from the setting sun. Toward the horizon, several bright patches of bare bedrock are revealed.