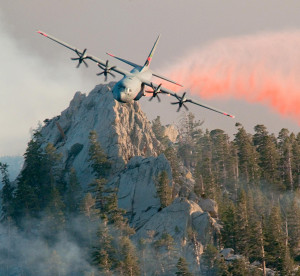 Each aircraft is equipped with the Modular Airborne Fire Fighting System, which can discharge 3,000 gallons of water or fire retardant in less than five seconds.

“The air tankers of the 146th Airlift Wing are a proven asset in California’s fight against wildfires,” said Army Maj. Gen. David S. Baldwin, adjutant general for the California National Guard. “Their capacity to drop thousands of gallons of water and retardant in just one pass can be a game changer in the effort to keep these fires in check.”

Combating wildfires
The state-of-the-art C-130J aircraft are based at Channel Islands Air National Guard Base and are being put to use to combat the San Bernardino-area wildfires. The MAFFS-equipped air tankers can discharge the maximum amount of water or retardant over an area one-quarter of a mile long by 60 feet wide, and can refill in less than 12 minutes.

“California is fortunate to have such a valuable asset ready for us to call up when needed in order to augment our own fleet of over 50 aerial firefighting resources,” said Chief Dave Teter, Cal Fire’s deputy director of fire protection. “We have a long-standing and well-exercised relationship with our California National Guard partners and we appreciate their support during periods of high fire activity.”

The airmen join more than 330 California Guard members who are already supporting firefighting efforts in Monterey County in coordination with Cal Fire. California Guard helicopters are also performing medical evacuation operations at wildfires across the state.