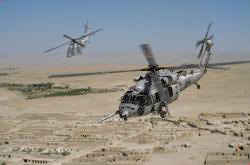 Sikorsky, a Lockheed Martin company, has inaugurated a new Systems Integration Lab to begin testing key systems for the Combat Rescue Helicopter, the new aircraft being built for the U.S. Air Force.

The integrated experience will closely resemble the actual aircraft and allow the pilot to fly simulated missions to evaluate qualitative performance, such as pilot workload, and have the actual “look and feel” of the aircraft.

“This facility provides a simulated flight environment allowing us to test key subsystems individually and then fully integrated. This will identify any issues before advancing to test flight, and will help reduce the number of required flight test hours, resulting in time and cost savings for the customer,” said Tim Healy, Sikorsky CRH program director.

Sikorsky and the Air Force hosted a four-day meeting in August to provide stakeholders and key collaborators from government and industry an in-depth review that demonstrated that overall design met the training system requirements. Also participating in the review were key suppliers FlightSafety International Inc. and Logistics Services International Inc, as well as participants from the USAF acquisition and test teams, Air Combat Command, Air Education and Training Command, and representatives of the USAF operational combat rescue community.

“Achieving this milestone ahead of schedule was a strong indication the program is well prepared for detailed design and subsequent production,” said Healy. “I’m confident we have a solid plan to meet the USAF accelerated schedule to bring the CRH to the war fighter six months faster. That is our intent, and we are in a good position to do that.”

The $1.2 billion Engineering Manufacturing & Development contract includes development and integration of the next generation combat rescue helicopter and mission systems, including delivery of four HH-60W helicopters, as well as six aircrew and maintenance training devices and instructional courseware. The training devices run the spectrum from full motion simulators and full aircraft maintenance trainers, to discrete “part task training devices” for aircraft systems such as avionics, rescue hoist and landing gear.

The flight simulators, including both a full flight simulator with motion and a non-motion flight training device, will be built to the highest levels of FAA standards and include the capability to link with other simulators on the Combat Air Forces Distributed Mission Operations network.  The flight simulators will train full aircrew allowing pilots and special mission aviators to train together.  Avionics desk top trainers will have an array of touch screens mimicking the “glass cockpit” and include the ability to learn aircraft systems troubleshooting.

The part task training devices are designed to train maintenance personnel and to provide hands-on training in operations, servicing, inspection, and removal and installation of components

The instructional courseware will provide interactive instruction and computer-based training for both HH-60W maintainers and operators
“This is an important step forward for the CRH program,” said Melanie Marshall, USAF Deputy Program Manager.  “The CRH team is working hard to provide our warfighters the capability they require to continue to conduct the critical personnel recovery mission far into the future.”

The CRH program conducted the Air Vehicle PDR in April 2016.