Acting NASA Administrator Robert Lightfoot said in a statement on Gordon’s passing: “NASA and the nation have lost one of our early space pioneers. We send our condolences to the family and loved ones of Gemini and Apollo astronaut Richard Gordon, a hero from NASA’s third class of astronauts.”

Gordon, a retired U. S. Navy captain, became an astronaut in 1963. He spent more than 316 hours in space on two missions. He was the pilot for the three-day Gemini 11 mission in 1966 and performed two spacewalks. At the time of the flight, Gemini 11 set the world altitude record of 850 miles.

Gordon was born in Seattle, Wash., in 1929. He graduated from North Kitsap High School in Poulsbo, Wash., in 1947, then received a Bachelor of Science degree in Chemistry from the University of Washington in 1951.

In 1953, Gordon received his wings as a naval aviator. He then attended All-Weather Flight School and jet transitional training and was subsequently assigned to an all-weather fighter squadron at the Naval Air Station at Jacksonville, Fla.

In 1957, he attended the Navy’s Test Pilot School at Patuxent River, Md., and served as a flight test pilot until 1960. During this tour of duty, he did flight test work on the F8U Crusader, F11F Tigercat, FJ Fury, and A4D Skyhawk, and was the first project test pilot for the F4H Phantom II. He served with Fighter Squadron 121 at Naval Air Station Miramar, Calif., as a flight instructor in the F4H and participated in the introduction of that aircraft to the Atlantic and Pacific fleets. He was also flight safety officer, assistant operations officer, and ground training officer for Fighter Squadron 96 at Miramar.

Gordon made a second flight in 1969 as command pilot on Apollo 12 with spacecraft commander, Charles Conrad and lunar module pilot, Alan Bean. Throughout the 31-hour lunar surface stay by Conrad and Bean, Gordon remained in orbit around the moon on the command module, “Yankee Clipper.” 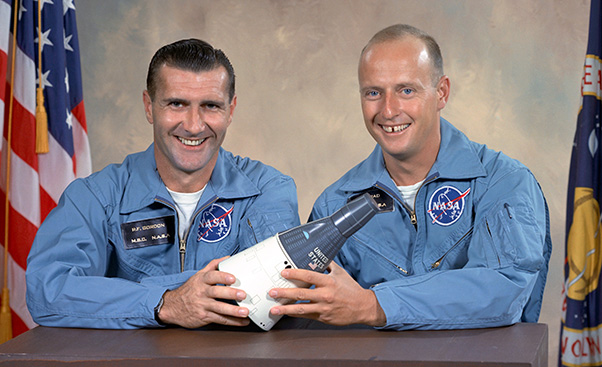 Gordon, left, made his first spaceflight in September 1966 with crewmate Pete Conrad on Gemini XI.

Since retiring from NASA, Gordon served as executive vice president of the New Orleans Saints Professional Football Club in the National Football League and held executive positions at several companies in the oil and gas, engineering and technology industries.

In November 2005, NASA honored veteran Gordon with an Ambassador of Exploration award. NASA presented these prestigious awards to the astronauts who took part in the nation’s Mercury, Gemini and Apollo space programs from 1961 to 1972. Ambassadors of Exploration help NASA communicate the benefits and excitement of space exploration.