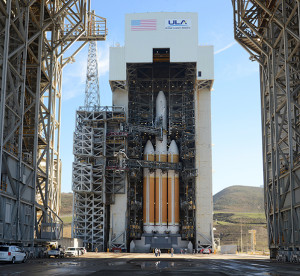 The NROL-71 prior to launch.

Following a long string of delays, the nation’s newest advanced imaging satellite launched into orbit from Vandenberg Air Force Base, Calif., on January 19.

The top-secret spacecraft, described by government spokespersons only as “a national defense payload,” flew into space atop a United Launch Alliance Delta IV-Heavy. Standing over 230 feet tall and weighing more than 14 tons, the Delta IV-H is currently the largest rocket in the U.S. spacelift inventory.

The National Reconnaissance Office — a secretive agency that develops and operates the country’s fleet of spy satellites — sponsored the mission, which bore the designation NROL-71.

As is customary with NRO launches, detailed information about the satellite was not publicly disclosed. This hasn’t stopped civilian analysts from speculating on the nature of the classified payload based upon previous Delta IV-Heavy launches. Ted Molczan, a Canadian observer who tracks spacecraft for fun, believes NROL-71 is the latest in a long line of sophisticated electro-optical reconnaissance satellites that provide ultra-high resolution imagery for the U.S. intelligence community. Molczan suspects the new spacecraft is a follow-on to the legacy KH-11 Kennen/Crystal series that has flown 16 times since 1976.

The NRO sought to replace the KH-11 nearly a decade ago through the Future Imagery Architecture program, which called for acquisition of completely new optical and radar imaging systems. In 1999 the agency awarded Boeing a contract to develop both but in 2005 the optical portion was cancelled due to delays, technical problems, and cost overruns. As a result, the NRO called on Lockheed Martin to build two additional KH-11 satellites as well as a follow-on system. Boeing retained the contract for the FIA radar satellite.

Molczan and others identify satellites using a combination of information published by the NRO and other government sources, as well as observation of the satellites’ orbits and behavior. Analysis of launch vehicle characteristics, launch hazard warnings for maritime and aviation safety, and comparison to previous missions allows most NRO satellites to be identified prior to liftoff. Since, so far, only KH-11 satellites have launched aboard a Delta IV-H from Vandenberg, observers expected the NROL-71 mission to carry an advanced replacement into a southwesterly trajectory required for a sun-synchronous orbit. Surprisingly, launch debris hazard areas for NROL-71 indicated the rocket would follow a southeasterly track towards an orbit inclined at about 74 degrees. 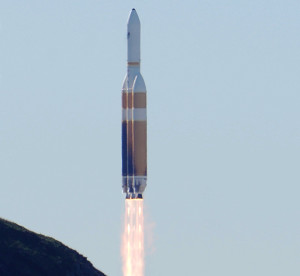 The NROL-71 launches from Vandenberg Air Force Base, Calif.

With the exception of a single technology demonstration mission in 2010, no NRO satellite has operated in an orbit close to this inclination since 1971. Use of the powerful Delta IV-H suggests the NROL-71 payload must either have been exceptionally heavy or needed to be lofted into an unusually high orbit. While some analysts still believe the unusual orbit doesn’t preclude an advanced KH-11-type spacecraft, others have suggested that NROL-71 may be a successor to the stealthy Misty imaging satellites launched in 1990 and 1999. Marco Langbroek, a satellite tracker in the Netherlands, suspects the payload might be a radar imaging satellite, which would not require a sun-synchronous orbit.

Preparations for the NROL-71 mission were underway for more than three years. The Air Force awarded ULA a launch services contract in November 2015 with a projected liftoff in September 2018, but there were numerous delays. As the original planned launch date neared, the flight was rescheduled to Dec. 3, 2018, and then moved forward to Nov. 29. Range conflicts with other launch operations pushed NROL-71 back on Dec. 7 but liftoff was delayed 24 hours due to an issue with holdfire circuitry in one of the Vandenberg ground stations. The next attempt was scrubbed just 7.5 seconds before liftoff and a mere half-second before engine ignition when a sensor detected a fault and triggered an automatic abort. Inclement weather caused additional delays. An attempt on December 19 was called off due to a small hydrogen fuel leak.

Launch team members at Vandenberg decorated the rocket’s payload shroud with a mission insignia depicting a bald eagle as the symbol of freedom. The eagle wears dog tags, one bearing the initials JLC in honor of Col. Joshua L. Chamberlain, a Union commander who was awarded the Medal of Honor for heroism at the Battle of Gettysburg in 1863. The mission motto, “Serving Those Who Serve,” represents the NRO’s support of the nation’s war fighters.