Jan. 16, 1936: A delegation of officers from Headquarters, Pacific Coast Air Force, inspected the bombing and gunnery range at Muroc (present-day Edwards Air Force Base). At that time, the housing facilities consisted of tents for up to 65 men and a permanent kitchen building. The bombing range west of the lakebed included outline targets of various aircraft types, a battleship, and several buildings. Some 3,000 practice bombs had been dropped during the preceding 20-day period.


Jan. 16, 1991: Operation Desert Storm, the allied campaign to liberate Kuwait from Iraqi occupation, began with an extensive aerial bombing campaign. For 42 consecutive days and nights, coalition forces subjected Iraq to one of the most intensive aerial bombardments in history. Flying more than 100,000 sorties, the coalition dropped 88,500-tons of bombs. Sorties were flown mostly from coalition bases in Saudi Arabia and the six carrier battle groups in the Persian Gulf and Red Sea.

Jan. 16, 2003: The Space Shuttle Columbia blasted off for what turned out to be its last flight; on board was Israel’s first astronaut, Ilan Ramon. The mission ended in tragedy on Feb. 1, when the shuttle broke up during its return descent, killing all seven crew members.

Jan. 17, 1961: President Dwight D. Eisenhower delivered his farewell address in which he warned against “the acquisition of unwarranted influence, whether sought or unsought, by the military-industrial complex.”

Jan. 17, 1977: An A-10A performance test series began in order to obtain the quantitative data needed to prepare a performance supplement to the flight manual.

Jan. 17, 1990: NASA selected Maj. Eileen M. Collins, a student in Class 89-B of the U.S. Air Force Test Pilot School at Edwards Air Force Base, Calif., as a Space Shuttle pilot candidate. Collins was the first woman to be selected for the job.

Jan. 18, 1911: The first landing of an aircraft on a ship took place, as pilot Eugene B. Ely brought his Curtiss biplane in for a safe landing on the deck of the armored cruiser USS Pennsylvania in San Francisco Harbor. 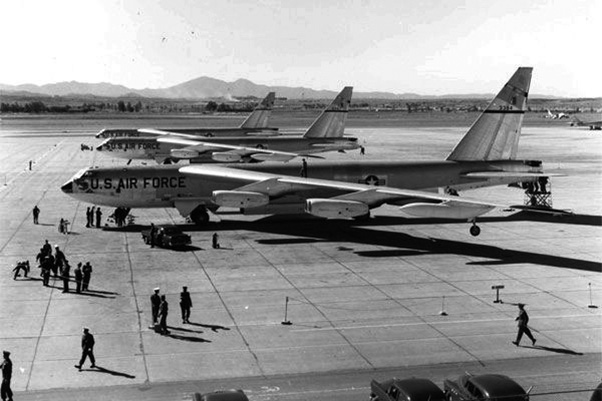 Jan. 18, 1957: A trio of B-52s completed the first non-stop, round-the-world flight by jet planes, landing at March Air Force Base, Calif., after more than 45 hours aloft.
Led by Maj. Gen. Archie J. Old, Jr. as flight commander, five B-52B aircraft of the 93rd Bombardment Wing of the 15th Air Force took off from Castle Air Force Base, Calif., on Jan. 16, 1957, at 1 p.m., with two of the planes flying as spares. Old was aboard Lucky Lady III (serial number 53-0394), which was commanded by Lt. Col. James H. Morris, who had flown as the co-pilot aboard the Lucky Lady II when it made the world’s first non-stop circumnavigation in 1949. Heading east, one of the planes was unable to refuel successfully from a Boeing KC-97 Stratofreighter and was forced to land at Goose Bay Air Base in Labrador. The second spare refueled with the rest of the planes over Casablanca, Morocco and then split off as planned to land at RAF Brize Norton in England.
After a mid-air refueling rendezvous over Saudi Arabia, the planes followed the coast of India to Sri Lanka and then made a simulated bombing drop south of the Malay Peninsula before heading towards the next air refueling rendezvous over Manila and Guam. The three planes continued across the Pacific Ocean and landed at March AFB at 10:19 a.m., Jan. 18, after flying for a total of 45 hours and 19 minutes. The 24,325 miles flight was completed at an average speed of 525 miles per hour and was completed in less than half the time required by Lucky Lady II when it made the first non-stop circumnavigation in 1949. Gen. Curtis LeMay was among the 1,000 on hand to greet the three planes, and he awarded all 27 crew members the Distinguished Flying Cross. Though Old called the flight “a routine training mission,” the Air Force emphasized that the mission demonstrated its “capability to drop a hydrogen bomb anywhere in the world.”
The National Aeronautic Association recognized the 93rd Bombardment Wing as recipient of the Mackay Trophy for 1957.

Jan. 19, 1942: The bombing range’s new 6,500-foot concrete runway, apron and four taxiways were completed at Edwards Air Force Base, Calif. This allowed year-round use of the facility, especially during the winter months when the dry lakebed was likely to be flooded.

Jan. 20, 1993: The B-2 Spirit bomber successfully completed its first weapon separation flights. In this photograph, a B-2 is dropping a B-83 nuclear weapon shape.

Jan. 21, 2004: An F-117 Nighthawk from the F-117 CTF successfully released two types of Joint Direct Attack Munitions for the first time. The autonomous GBU-31 (v) 1/B [blast effect] and GBU-31 (v) 3/B [deep penetrator] “smart bombs” were designed to penetrate hardened targets. The test was conducted at the PIRA range.

Jan. 22, 1970: The first regularly scheduled commercial flight of the Boeing 747 began in New York and ended in London some six and a half hours later.