April 23, 1956: The first flight of the Douglas C-133 Cargomaster took place. It was flown from Long Beach to Edwards by Douglas test pilot J.C. Armstrong. The four-engine turboprop was a strategic cargo aircraft with rear-loading doors, and was designed to transport ballistic missiles and other bulky cargo items.


April 24, 1917: Lt. Col. Billy Mitchell made the first flight by an American officer over German lines, flying with a French pilot. Before long, Mitchell had gained enough experience to begin preparations for American air operations. Mitchell rapidly earned a reputation as a daring, flamboyant, and tireless leader. In May, he was promoted to lieutenant colonel. In September 1918, he planned and led nearly 1,500 British, French, and Italian aircraft in the air phase of the Battle of Saint-Mihiel, one of the first coordinated air-ground offensives in history. He was elevated to the rank of (temporary) brigadier general on Oct. 14, 1918, and commanded all American air combat units in France. He ended the war as Chief of Air Service, Group of Armies, and became Chief of Air Service, Third Army after the armistice. He returned from Europe with a fervent belief that within a near future, possibly within ten years, air power would become the predominant force of war, and that it should be united entirely in an independent air force equal to the Army and Navy.

April 24, 1946: The MiG-9 made its first flight in the Soviet Union. The Mikoyan-Gurevich MiG-9 was the first turbojet fighter developed by Mikoyan-Gurevich in the years immediately after World War II. It used reverse-engineered German BMW 003 engines. Categorized as a first-generation jet fighter, it was moderately successful, but suffered from persistent problems with engine flameouts when firing its guns at high altitudes due to gun gas ingestion. A number of different armament configurations were tested, but nothing solved the problem. Several different engines were evaluated, but none were flown as the prototype of the Mikoyan-Gurevich MiG-15 promised superior performance. A total of 610 aircraft were built, including prototypes, and they entered service in 1948 with the Soviet Air Forces.

April 24, 1946: The Yakovlev Yak-15 made its first flight in the Soviet Union. The Yakovlev Yak-15 was a first-generation Soviet turbojet fighter developed by the Yakovlev design bureau immediately after World War II. It used a reverse-engineered German Junkers Jumo 004 engine. Along with the Swedish Saab 21R, it was one of only two jets to be successfully converted from a piston-powered aircraft and enter production. A total of 280 aircraft were built in 1947. Although nominally a fighter, it was mainly used to qualify piston-engine-experienced pilots to fly jets.

April 25, 1922: The U.S. Navy’s Stout ST-1, the first all-metal aircraft designed for the Navy, made its first flight piloted by Eddie Stinson. The Stout ST was a twin-engine torpedo bomber. It pioneered the American use of metal construction and the cantilever “thick wing” design concepts of German aeronautical engineer Hugo Junkers, themselves pioneered in the second half of 1915. At an acceptance ceremony, a Marine pilot stalled the aircraft and crashed it. The pilot survived, but all orders for the aircraft were canceled by the Navy. The loss of the aircraft and the Navy contract were financially devastating for Stout.


April 25, 1956: At Edwards Air Force Base, Calif., test pilot U.S. Air Force Lt. Col. Frank Kendall “Pete” Everest was airdropped from a Boeing EB-50D Superfortress in the Bell X-2 supersonic research rocket plane, serial number 46-674. This was the 10th flight of the X-2 program, and only the third powered flight. For the first time, Everest fired both chambers of the Curtiss-Wright XLR25 rocket engine. On this flight, the X-2 reached Mach 1.40 and 50,000 feet. It was the first time an X-2 had gone supersonic.

April 25, 1990: In orbit 380 miles above Earth, the crew of Discovery (STS-31) released the Hubble Space Telescope from the cargo bay. This satellite was designed to study the universe in ultraviolet, visible and infrared light, with a clarity never before seen. 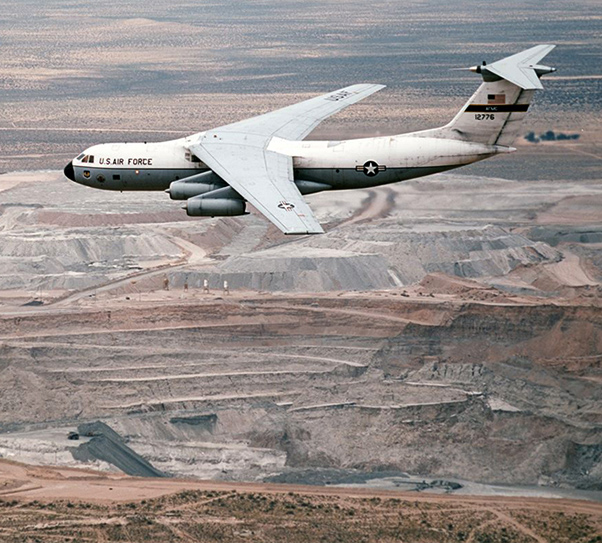 April 25, 1996: The NC-141A Electric Starlifter made its first flight since it had been converted to power-by-wire/fly-by-wire aileron controls. The Electric Starlifter program explored the use of these controls in order to save weight and increase serviceability rates of line aircraft.


April 26, 1962: At a non-existent location in the Mojave Desert of Nevada, Lockheed Chief Test Pilot Louis Wellington “Lou” Schalk, Jr., was scheduled to take the first A-12 Oxcart for a high-speed taxi test on the specially constructed 8,000-foot runway. However, he had received secret, specific instructions from designer Kelly Johnson to take the craft, known as “Article 121,” airborne. Schalk roared down the runway and lifted off. He flew at about 20 feet for two miles. The super-secret aircraft was oscillating badly so he set it down straight ahead on the dry lake bed and disappeared into a cloud of dust and flying sand. Johnson said that it “was horrible to watch.” A few minutes later, the needle nose of Article 121 appeared out of the dust as Schalk taxied back to the runway. It turned out that some equipment had been hooked up backwards. Subsequent flights were made without difficulty. This was the actual first flight of the Central Intelligence Agency’s Top Secret A-12 reconnaissance aircraft. The “official” first flight would come several days later.

April 27, 1911: The Aeronautical Division of the U.S. Signal Corps accepted its second airplane, a Curtiss Model D Type IV, at Fort Sam Houston, Texas. The airplane was built by Glenn H. Curtiss’ Curtiss Aeroplane and Motor Company at Hammondsport, N.Y. It was known as a “Curtiss Pusher,” as it was propelled by a propeller behind the engine. The aircraft was a canard configuration with elevators mounted in front. It had tricycle landing gear. The airframe was primarily spruce and ash, with flying surfaces covered with doped fabric. It was easily disassembled for transport on Army wagons.

April 28, 1919: Using the Type A 28-foot backpack parachute, volunteer Leslie Irvin, jumped from a de Havilland DH9 biplane at 100 mph, 1,500 feet above the ground and manually pulled the ripcord, fully deploying his chute at 1,000 feet. Irvin became the first American to jump from an airplane and manually open a parachute in midair. The chute performed flawlessly, although Irvin broke his ankle on landing.


April 29, 1945: The first flight of Operation Manna and Operation Chowhound took place, flying food packages to civilians in Nazi occupied areas of The Netherlands. By early 1945, the situation was growing desperate for the three million or more Dutch still under German control. Prince Bernhard appealed directly to Allied Supreme Commander Dwight D. Eisenhower, but Eisenhower did not have the authority to negotiate a truce with the Germans. While the prince got permission from British Prime Minister Winston Churchill and U.S. President Franklin D. Roosevelt, Eisenhower had Air Commodore Andrew Geddes begin planning immediately. On 23 April, authorization was given by the Chief of Staff, George Marshall. Allied agents negotiated with Reichskommissar Arthur Seyss-Inquart and a team of German officers.
The truce had not yet been agreed to by Germany, but on April 29, Operations Manna and Chowhound began. The first night, to test the feasibility of the project, two Royal Air Force Avro Lancaster four-engine long range heavy bombers of No. 101 Squadron — Bad Penny, crewed by Canadians, and a second ship flown by an Australian crew — were loaded with food at RAF Ludford Magna and flew into The Netherlands at barely 50 feet above the ground. To drop the food, they simply opened the bomb bay doors and the bags and packages fell to the starving people below. Operation Manna ran April 29 to May 7. Chowhound ran May 1-8. Between the two operations, more than 11,000 tons of food were distributed.

April 29, 1963: Category II Performance Tests were completed on a Cessna T-37C trainer equipped with two 65-gallon tip tanks and two bomb racks. The tests demonstrated that the “Tweety Bird” would be capable of providing training for ground support warfare under the Military Aid Program, and serving as a limited war ground support vehicle.

April 30, 1963: Betty Miller, a 37-year-old flight instructor from Santa Monica, Calif., took off from Oakland, Calif., in a twin-engine Piper PA-23-160 Apache H on the first leg
of her flight to Australia. When she landed in Brisbane, Australia on May 12, 1963, she became the first woman to complete a solo Trans-Pacific flight. The flight had Miller fly from Oakland to Oahu, Hawaii; Hawaii to Canton Island, about halfway between Hawaii and Fiji; and Canton Island to Fiji. Instead of flying the final leg, Fiji to Brisbane, she was forced to divert to Noumea, New Caledonia because of bad weather. Leaving Noumea, she arrived in Brisbane after crossing 7,400 miles of ocean, and spending 51 hours and 38 minutes in the air.

April 30, 2004: The Fédération Aéronautique Internationale (FAI) officially certified that an Air Force Flight Test Center B-1B Lancer had set 45 world records and broken five previously set records. This feat had been accomplished during the course of two flights at the Center’s 2003 Open House Oct. 25 and 26, 2003.