June 12, 1979: The Rutan Long-EZ prototype, N79RA, made its first flight. The Rutan Model 61 Long-EZ is a tandem 2-seater homebuilt aircraft designed by Burt Rutan’s Rutan Aircraft Factory. The Long-EZ has a canard layout, with a swept wing with root leading edge strakes and wingtip rudders, and a pusher engine and propeller. The tricycle landing gear has fixed main wheels with streamlined spats, and a retractable nosewheel. Its predecessor was the VariEze, plans of which were first available to home builders in 1976. The Long-EZ was a plans-only kitplane, and several variants of the basic design have surfaced over the years. In this photograph, a Rutan Long-EZ, built by Bill Allen in 1984, takes off in Gloucestershire, England.

June 12, 1986: The Grumman X-29A completed four sorties in one day, a remarkable achievement for a one-of-a-kind experimental aircraft.


June 12, 2019: The U.S. Air Force successfully conducted the first flight test of its AGM-183A Air Launched Rapid Response Weapon, or ARRW, on a B-52 Stratofortress aircraft at Edwards Air Force Base, Calif. The AGM-183 ARRW is a hypersonic weapon planned for use by the U.S. Air Force. Developed by Lockheed Martin, the boost glide weapon is propelled to a maximum speed of Mach 7-plus by a missile before gliding towards its target.


June 13, 1962: A test team conducted the first flights of Project Rough Road, an evaluation of the short field takeoff and landing capabilities of the production C-130B, among other airframes. These test aircraft were loaded to a gross weight of 101,000 pounds and subjected to a variety of hard and soft sand and clay runway landings. Subsequent Rough Road tests were conducted at Eglin Air Force Base, Fla., Wright-Patterson Air Force Base, Ohio, and Barksdale Air Force Base, La.

June 14, 1966: The first mission was flown on a program to evaluate the performance of the F-106A carrying 360-gallon external fuel tanks.


June 14, 2006: The 418th Flight Test Squadron dropped a simulated 65-foot, 65,000 pound AirLaunch QuickReach rocket from a C-17A cargo aircraft. The mockup, the heaviest single load ever dropped from the Globemaster III, and part of a project called Falcon Small Launch Vehicle, a joint venture between the Defense Advanced Research Projects Agency (DARPA) and the Air Force, was designed to develop a new method for putting satellites into low-earth orbit.


June 15, 1916: The Boeing Model 1, also known as the B & W Seaplane, made its first flight. It was a U.S. single-engine biplane seaplane aircraft, and was the first Boeing product. It carried the initials of its designers, William Boeing and Conrad Westervelt. The first B & W was completed in June 1916 at Boeing’s boathouse hangar on Lake Union in Seattle, Wash. It was made of wood, with wire bracing, and was linen-covered. It was similar to the Martin trainer aircraft that Boeing owned, but the B & W had better pontoons and a more powerful engine. The first B & W was named Bluebill, and the second was named Mallard. The two B & Ws were offered to the United States Navy. When the Navy did not buy them, they were sold to the New Zealand Flying School and became the company’s first international sale. On June 25, 1919, the B & W set a New Zealand altitude record of 6,500 feet. The B & Ws were later used for express and airmail deliveries, making New Zealand’s first official airmail flight on Dec. 16, 1919.


June 15, 1946: The U.S. Navy’s Flight Demonstration Team made its first public appearance at Craig Field, Jacksonville, Fla., at the municipal airport’s dedication ceremony. A flight of three lightened Grumman F6F-5 Hellcat fighters, led by Officer-in-Charge Lt. Cmdr. Roy Marlin Voris, flew a 15-minute aerobatic performance. The team had been formed for the purpose of raising public political support for the Navy. Their fighters were painted overall glossy sea blue with “U.S. NAVY” on the fuselage in gold leaf. A single numeral, also gold leaf, on the vertical fin identified each individual airplane. Five weeks later, on July 21, the team would first call themselves the Blue Angels.


June 15, 1964: The first Douglas B-26K counter-insurgency aircraft was ferried to Edwards Air Force Base, Calif., to begin limited Category II evaluation for the Aeronautical Systems Center. The B-26K was a modification of the Korean War-era B-26Bs, adapted for combat service in Vietnam and was later redesignated the A-26A.


June 16, 1932: The Lockheed Aircraft Corp. finally closes down eight months after the receivers were called in to its parent company, Detroit Aircraft Corp. On June 21, investment broker Robert Ellsworth Gross leads a consortium that buys the assets and opens a new company under the same name. The syndicate bought the company for $40,000. The company was best known for the Lockheed Vega Model.


June 16, 1954: Lockheed test pilot Herman “Fish” Salmon took the XFV-1 on its first flight at Edwards Air Force Base, Calif. The XFV-1 was designed for vertical takeoff and landing. Because its large Allison YT-40A-14 turboprop engine was not configured for sustained vertical flight, the aircraft made all of its 32 test flights from a horizontal stance with temporary landing gear.


June 17, 1986: A B-47E-25-DT Stratojet made the very last flight of a B-47 when it was flown by Maj. Gen. John “J.D.” Moore and Lt. Col. Dale Wolfe, from Naval Air Weapons Station China Lake, Calif., to Castle Air Force Base, Calif., to be placed on static display. The aircraft, built by the Douglas Aircraft Company at Air Force Plant 3 in Tulsa, Okla. in 1952, had not flown in 20 years. It had sat in the Mojave Desert serving as a radar target. A total of 2,032 B-47s were built by a consortium of aircraft manufacturers: Boeing Airplane Company, Wichita, Kansas; Douglas Aircraft Company, Tulsa; and the Lockheed Aircraft Company, Marietta, Ga. 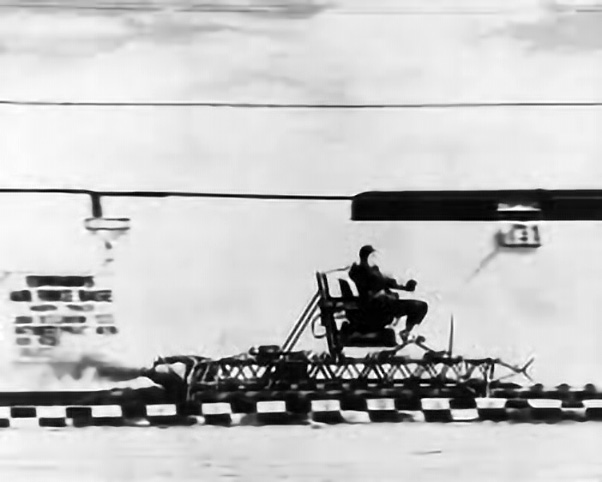 A rocket sled is a test platform that slides along a set of rails, propelled by rockets. As its name implies, a rocket sled does not use wheels. Instead, it has sliding pads, called “slippers,” which are curved around the head of the rails to prevent the sled from flying off the track. The rail cross-section profile is that of a Vignoles rail, commonly used for railroads. Wheels cannot be used on rocket sleds as the high velocities experienced will result in the wheels spinning to pieces due to extreme centrifugal forces. A rocket sled holds the land-based speed record for a vehicle, at Mach 8.5.

Rocket sleds were used extensively early in the Cold War to accelerate equipment considered too hazardous for testing directly in piloted aircraft. The equipment to be tested under high acceleration or high airspeed conditions was installed along with appropriate instrumentation, data recording and telemetry equipment on the sled. The sled was accelerated according to the experiment’s design requirements for data collection along a length of isolated, precisely level and straight test track. Testing ejection seat systems and technology prior to their use in experimental or operational aircraft became a common application of the rocket sled at Holloman Air Force Base, N.M. Perhaps the most famous, the tracks at Edwards Air Force Base, Calif., were used to test missiles, supersonic ejection seats, aircraft shapes and the effects of acceleration and deceleration on humans. The rocket sled track at Edwards Air Force Base was dismantled and used to extend the track at Holloman Air Force Base, taking it to almost 10 miles in length.


June 18, 1983: Sally Ride became the first U.S. woman in space when she launched aboard the Challenger Space Shuttle on mission STS-7. Ride was selected to be an astronaut as part of NASA Astronaut Group 8, in 1978, the first class to select women. She applied after seeing an advertisement in the Stanford student newspaper, and was one of only 35 people selected out of the 8000 applications. After graduating training in 1979 and becoming eligible to work as a mission specialist, she served as the ground-based capsule communicator (CapCom) for the second and third Space Shuttle flights, and helped develop the Space Shuttle’s “Canadarm” robot arm. Prior to her first space flight, Ride was subject to media attention due to her gender. During a press conference, she was asked questions such as, “Will the flight affect your reproductive organs?” and “Do you weep when things go wrong on the job?” Despite this and the historical significance of the mission, Ride insisted that she saw herself in only one way: as an astronaut. She spent a total of more than 343 hours in space.