Sept. 4, 1957: The Lockheed C-140 Jet Star made its first flight. According to the Edwards History Office, it was designed and flown in only eight months, to test new innovations in crash safety, noise suppression, and aerodynamics. The light utility transport featured two axial-flow jet engines mounted on the aft. Later production versions of the aircraft used four lightweight J60P-5 engines mounted in pairs. 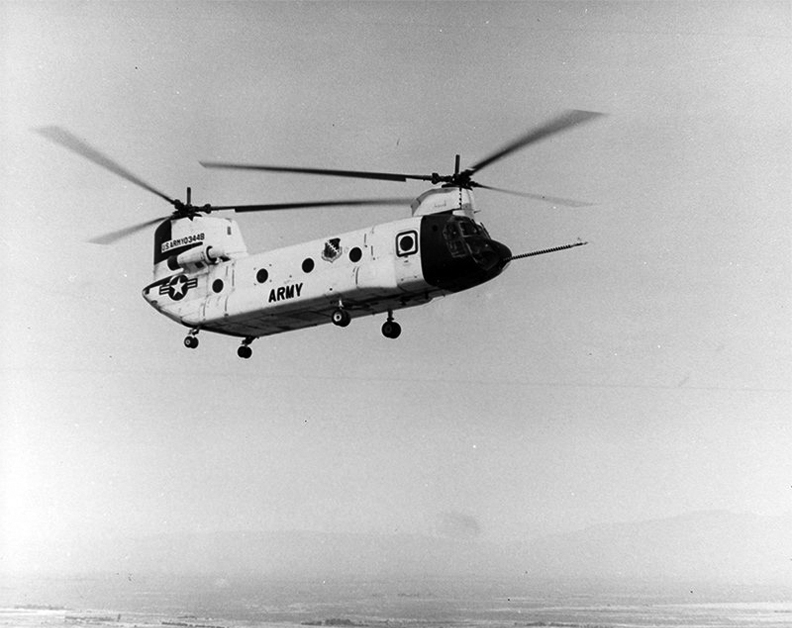 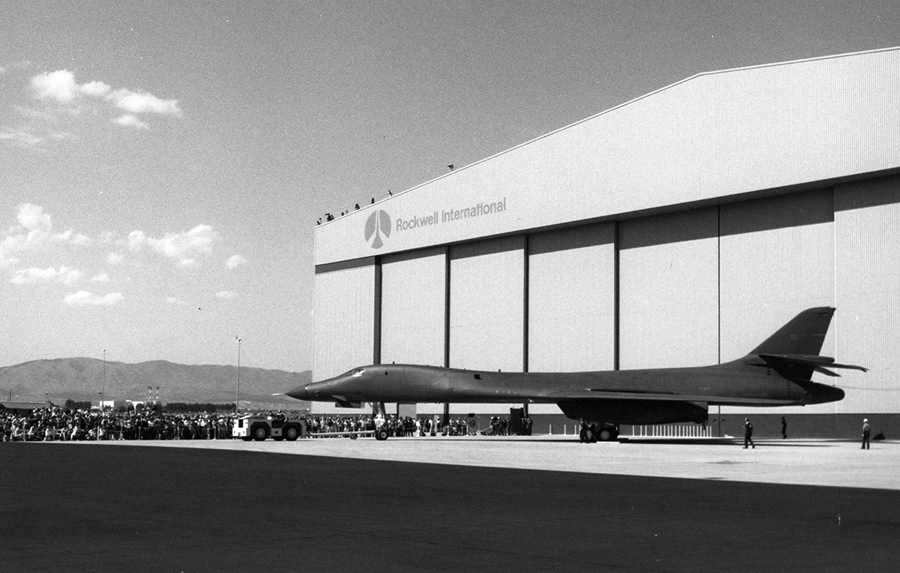 Sept. 4, 1984: The B-1B Lancer is rolled out at the Rockwell International facility at Air Force Plant 42 in Palmdale, Calif. 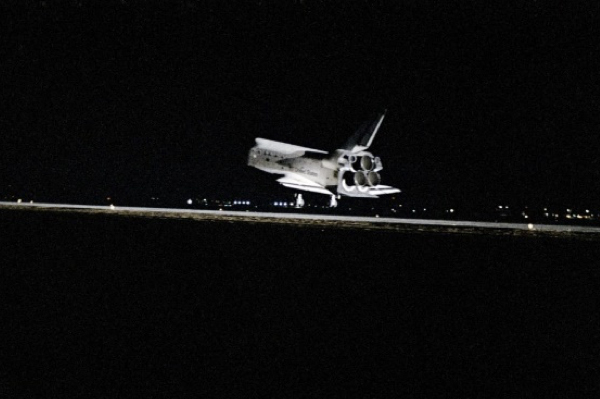 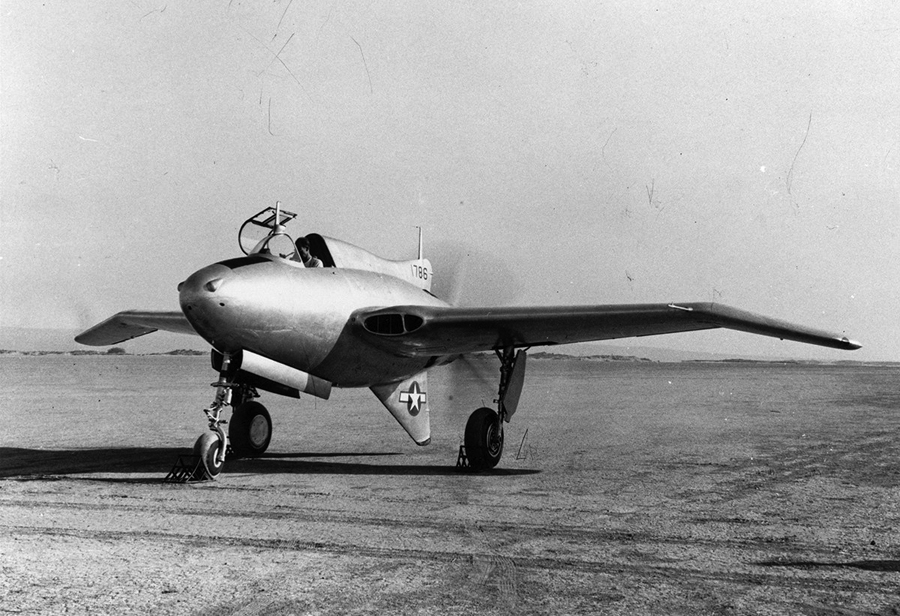 Sept. 6, 1943: Northrop’s experimental fighter, the XP-56 Black Bullet was trucked to the Muroc lakebed and made its first flight, flown by company test pilot John Myers. The XP-56 was a near-tailless design with a pusher engine driving contra-rotating propellers. It was the first aircraft to be constructed entirely of magnesium. 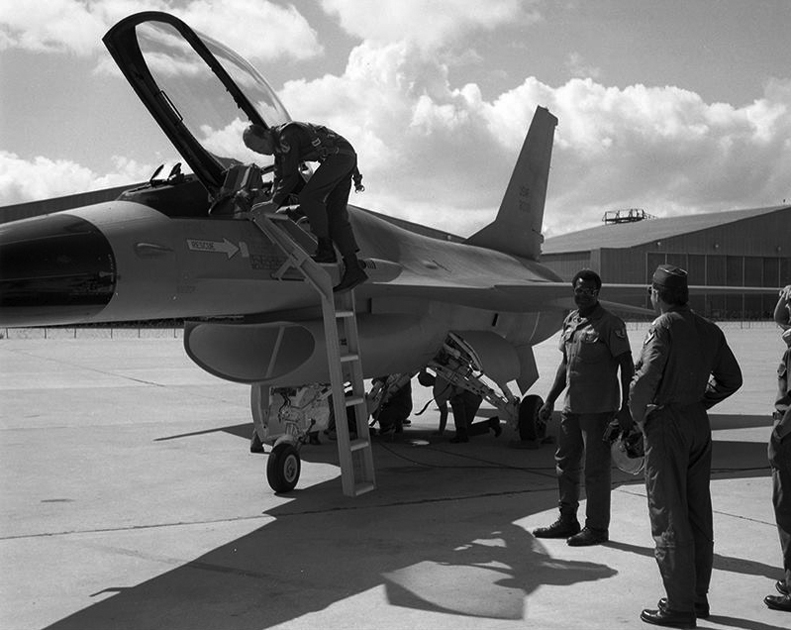 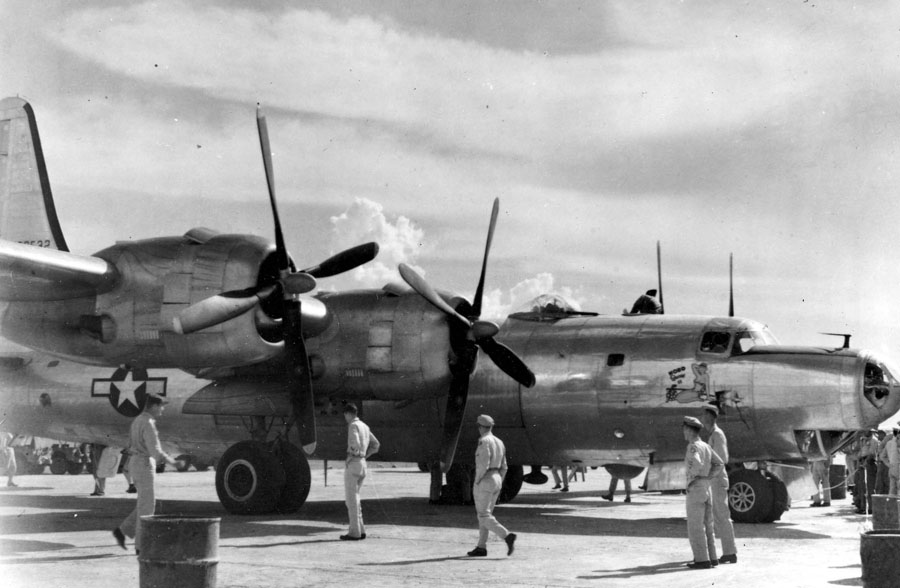 Sept. 7, 1942: The Consolidated B-32 Dominator made its first flight. The Dominator was an American heavy strategic bomber built for U.S. Army Air Forces during World War II, which had the distinction of being the last Allied aircraft to be engaged in combat during World War II. It was developed by Consolidated Aircraft in parallel with the Boeing B-29 Superfortress as a fallback design should the B-29 prove unsuccessful. The B-32 only reached units in the Pacific during mid-1945, and subsequently saw only limited combat operations against Japanese targets before the end of the war. Most of the extant orders of the B-32 were canceled shortly thereafter and only 118 B-32 airframes of all types were built. In this photograph, Army Air Force personnel at Clark Field, Philippines, get their first look at a Consolidated B-32 Dominator in May 1945. Comparable to the B-29 in size and performance, B-32s saw service with only one bomber squadron before war’s end. 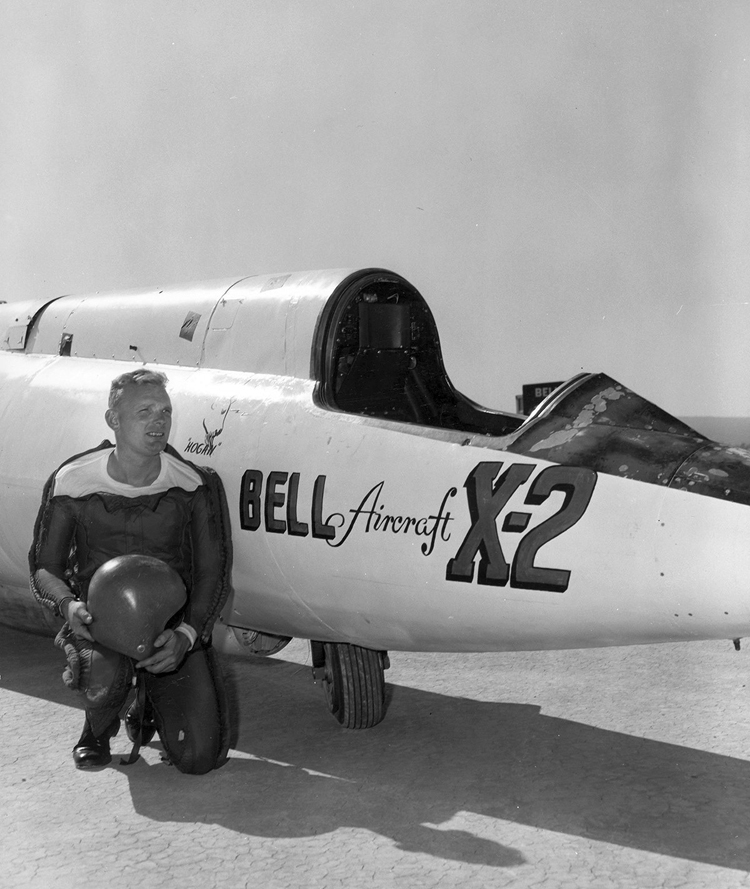 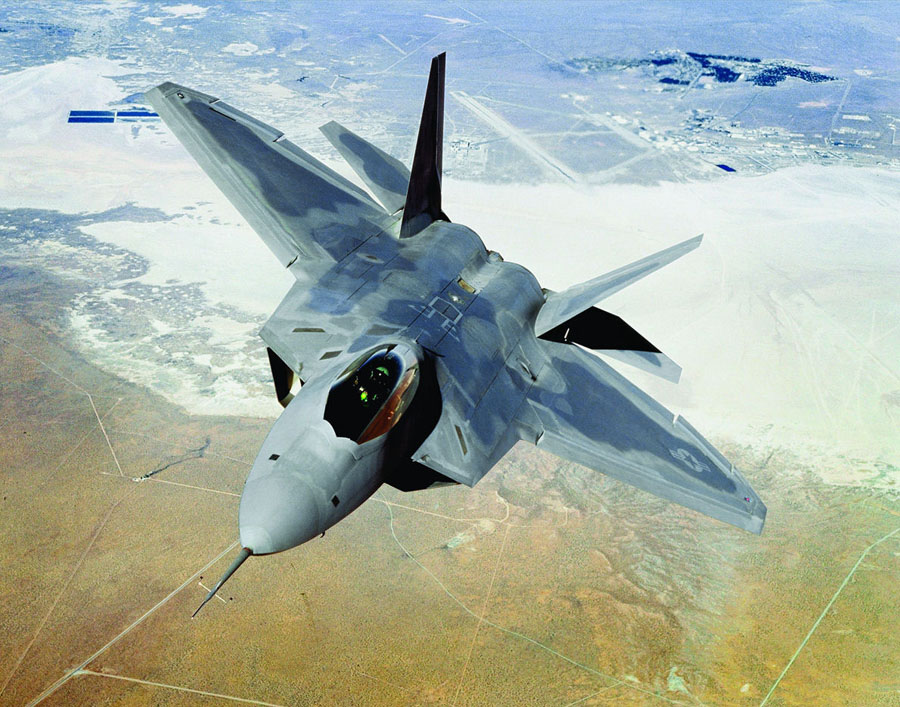 Sept. 7, 1997: The Lockheed Martin F-22 Raptor makes its first flight, reaching an altitude of 15,000 feet in less than three minutes. The F-22 Raptor is the result of Lockheed Martin winning the Advanced Tactical Fighter competition, which saw the Lockheed Martin YF-22 compete against the Northrop Grumman YF-23. In many respects, the YF-22s were different from production F-22s. Lockheed over-specified the fin area on its YF-22, so the company reduced the size of those on F-22s by 20ñ30 percent. Lockheed recontoured the shape of the wing and stabilator trailing edges to improve aerodynamics, strength, and stealth characteristics; the wing and stabilitor sweep was reduced by 6 degrees from 48 degrees. Finally, to improve pilot visibility, the canopy was moved forward 7 inches, and the engine intakes were moved rearward 14 inches. Flight testing for the F-22 continued until 2005, and on Dec. 15, 2005, the Air Force announced that the Raptor had reached its initial operational capability. 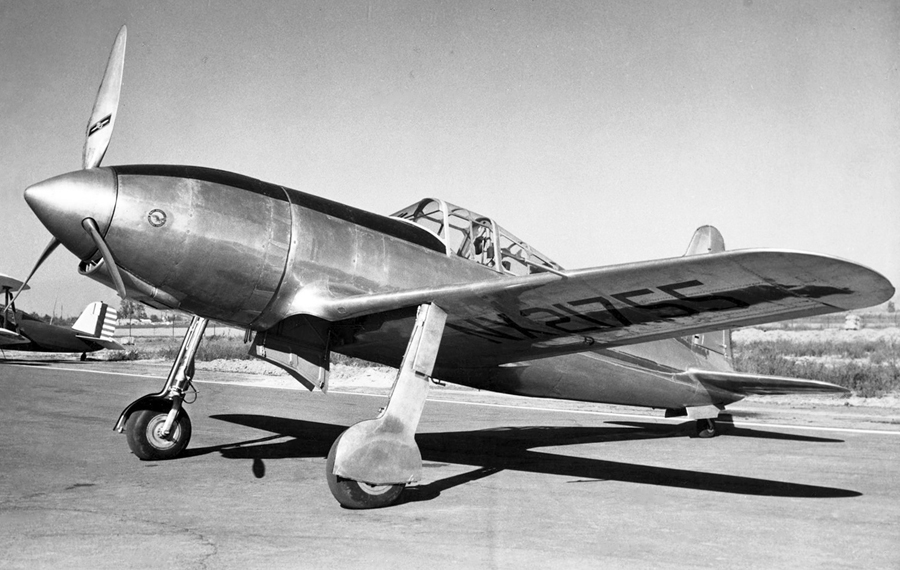 Sept. 8, 1939: The Vultee 48, a prototype of the P-66 Vanguard, made its first flight. The aircraft was a U.S. Army Air Forces fighter aircraft. It was initially ordered by Sweden, but by the time the aircraft were ready for delivery in 1941, the United States would not allow them to be exported, designating them as P-66s and retaining them for defensive and training purposes. Eventually, a large number were sent to China where they were pressed into service as combat aircraft with mixed results. 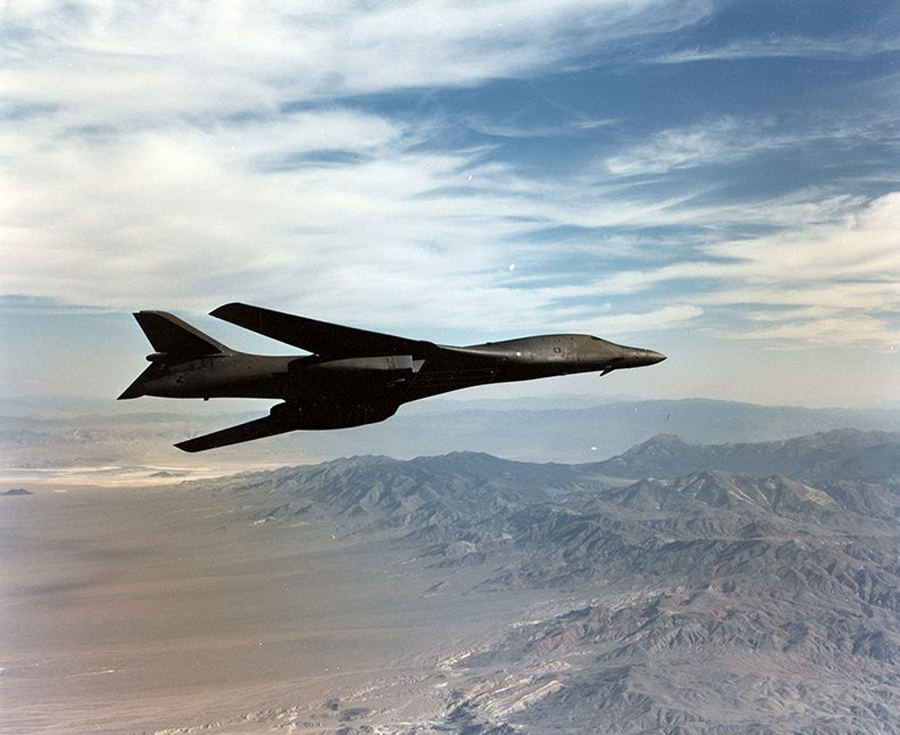 Sept. 8, 1988: The B-1B CTF completed the first automatic terrain-following flight of a B-1B Lancer bomber with the system in “hard ride” at 200 feet over mountainous terrain. This was considered the ultimate milestone for the B-1B ATF. 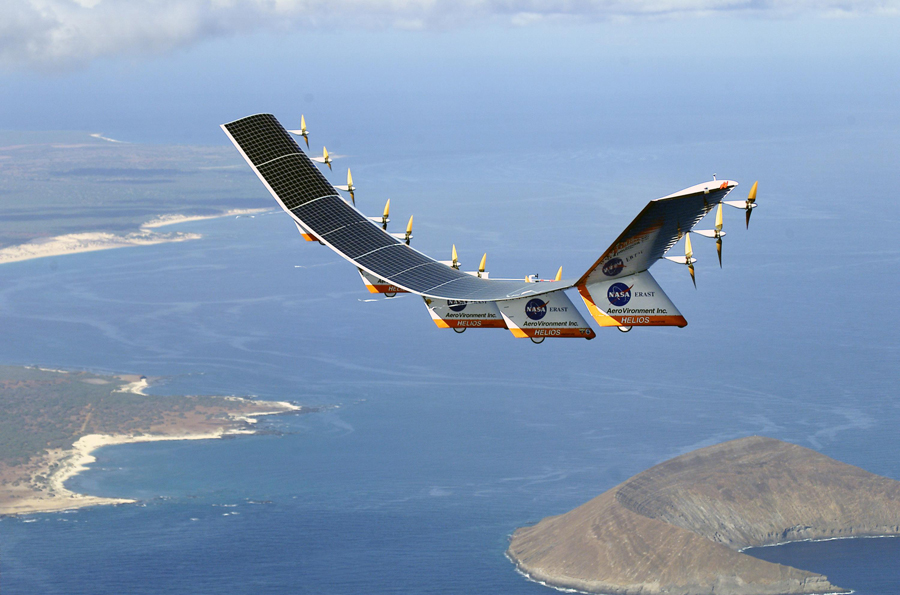 Sept. 8, 1999: The Helios Prototype flew for the first time at the Dryden (now Armstrong) Flight Research Center, Edwards, Calif. The Helios Prototype was the fourth and final aircraft developed as part of an evolutionary series of solar- and fuel-cell-system-powered unmanned aerial vehicles. AeroVironment, Inc. developed the vehicles under NASA’s Environmental Research Aircraft and Sensor Technology program. They were built to develop the technologies that would allow long-term, high-altitude aircraft to serve as atmospheric satellites, to perform atmospheric research tasks as well as serve as communications platforms. It was developed from the NASA Pathfinder and NASA Centurion aircraft. The Helios was developed to demonstrate the ability to reach and sustain horizontal flight at 100,000 feet altitude on a single-day flight, and to maintain flight above 50,000 feet altitude for at least four days, both on electrical power derived from non-polluting solar energy. The flight concluded prematurely after a small parachute, designed to keep the aircraft within a restricted airspace zone over the lakebed in case of a loss of control, unexpectedly deployed after an apparent electrical system failure. On June 26, 2003, the Helios Prototype broke up and fell into the Pacific Ocean about 10 miles west of the Hawaiian Island Kauai during a remotely piloted systems checkout flight in preparation for an endurance test scheduled for the following month. In this photograph, the Helios Prototype flying wing is shown near the Hawaiian islands of Niihau and Lehua during its first test flight on solar power. 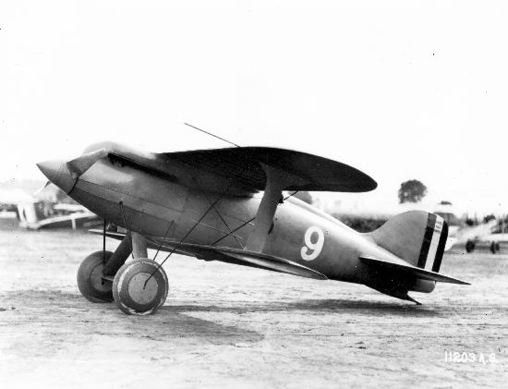 Sept. 9, 1923: The Curtiss R2 C-1 made its maiden flight. The aircraft was a racing aircraft designed for the U.S. Navy in 1923 by Curtiss. It was a single-seater biplane with a monocoque fuselage and staggered single-bay wings of unequal span braced with I-struts. The aircraft’s advanced streamlining featured a top wing mounted directly to the top of the fuselage and surface-mounted radiators for cooling the engine. The aircraft was originally designed and built as a landplane under the Navy designation R2C-1, of which two examples were produced. One was converted into a seaplane version known as the R2C-2 the following year. 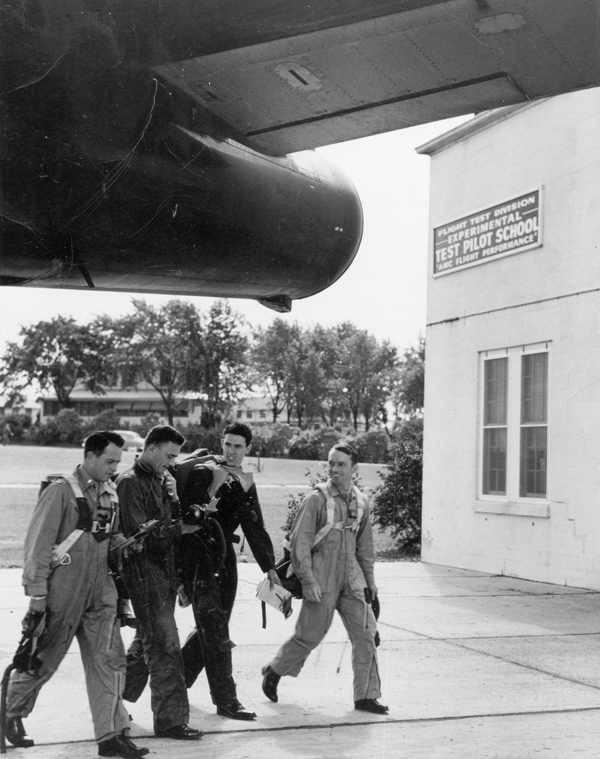 Army Air Forces Flying Training Command’s mission was conducting the flying program for new Army pilot candidates and air cadets. The program was divided in to stages including primary, advanced and specific classification such as pursuit, twin engine and multi-engine. These phases were prelude to Operational or Replacement training or crew training.

Army Air Forces Training Center was created as a result of the merger of the Army Air Forces Flying Training Command and the Army Air Forces Technical Training Command on July 31, 1943. Constituted and established on Jan. 23, 1942. Its mission was to train pilots, flying specialists, and combat crews. Re-designated on or about March 15, 1942, after the Army Air Forces became an autonomous arm of the United States Army. During its lifetime, the command struggled with the challenge of a massive wartime expansion of the air forces. Throughout 1942, the need for combat crew personnel far exceeded the current and contemplated production of the command’s flying training schools. The rate of expansion of housing and training facilities, instructors, as well as the procurement of aircraft and other equipment, though at a breakneck pace, constrained the rate of increase of production. Facilities were used to their maximum capacity as quickly as they could be stood up. Some schools were expanded while they were still under construction. New airfields had to be located in areas with sufficient flying space free of other air traffic, and the West Coast training center faced the extraordinary requirement to avoid sites near the internment camps for Japanese-Americans. 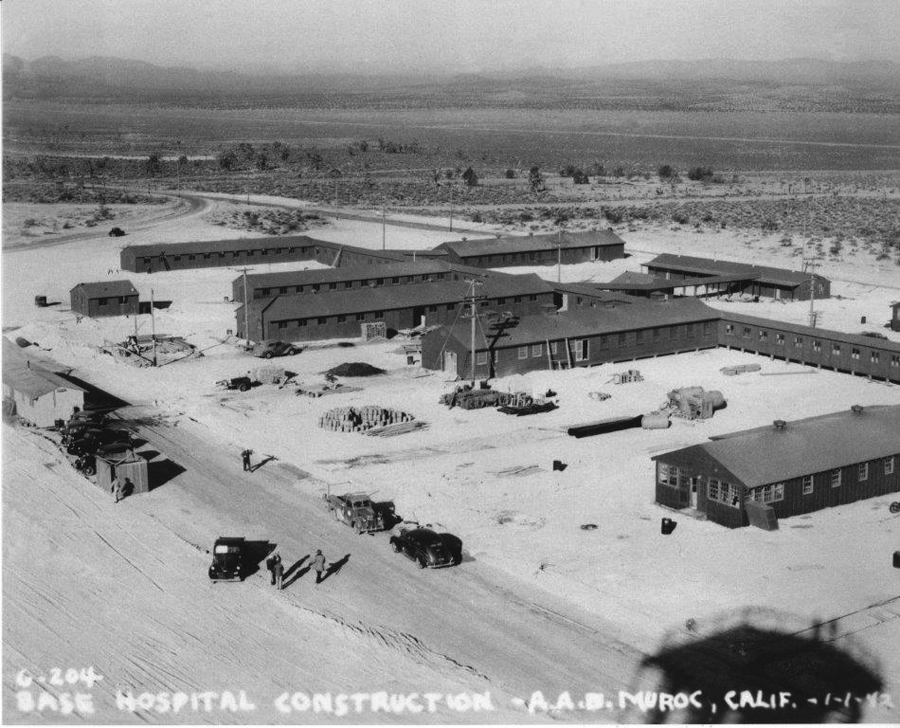 Sept. 10, 1940: Reflecting the nation’s overall military buildup on the eve of World War II, construction began on temporary housing facilities and an administrative building for the bombing range. Over the next several weeks, work began on barracks, a medical facility, ordnance magazines, a railroad spur and associated utilities. Fourth Air Force also authorized several new target installations, and a hard-surfaced runway adjacent to the lakebed. This marked the beginning of the permanent facilities on the western shore of the Muroc Dry Lake bed which eventually came to be known as South Base.

The area of the lakebed was first used by the railroads, with a watering station for steam engines located nearby by the Atchison, Topeka and Santa Fe Railroad. In 1910, the Corum family settled on the lake bed; they attempted to create a small community called “Muroc” (the name reversed), which failed. In 1933, the United States Army arrived, looking to establish a bombing range in the area. The lakebed’s potential use as an airfield was then realized, and in 1937 the United States Army Air Corps set up Muroc Air Field for training and testing, which later became Edwards Air Force Base. 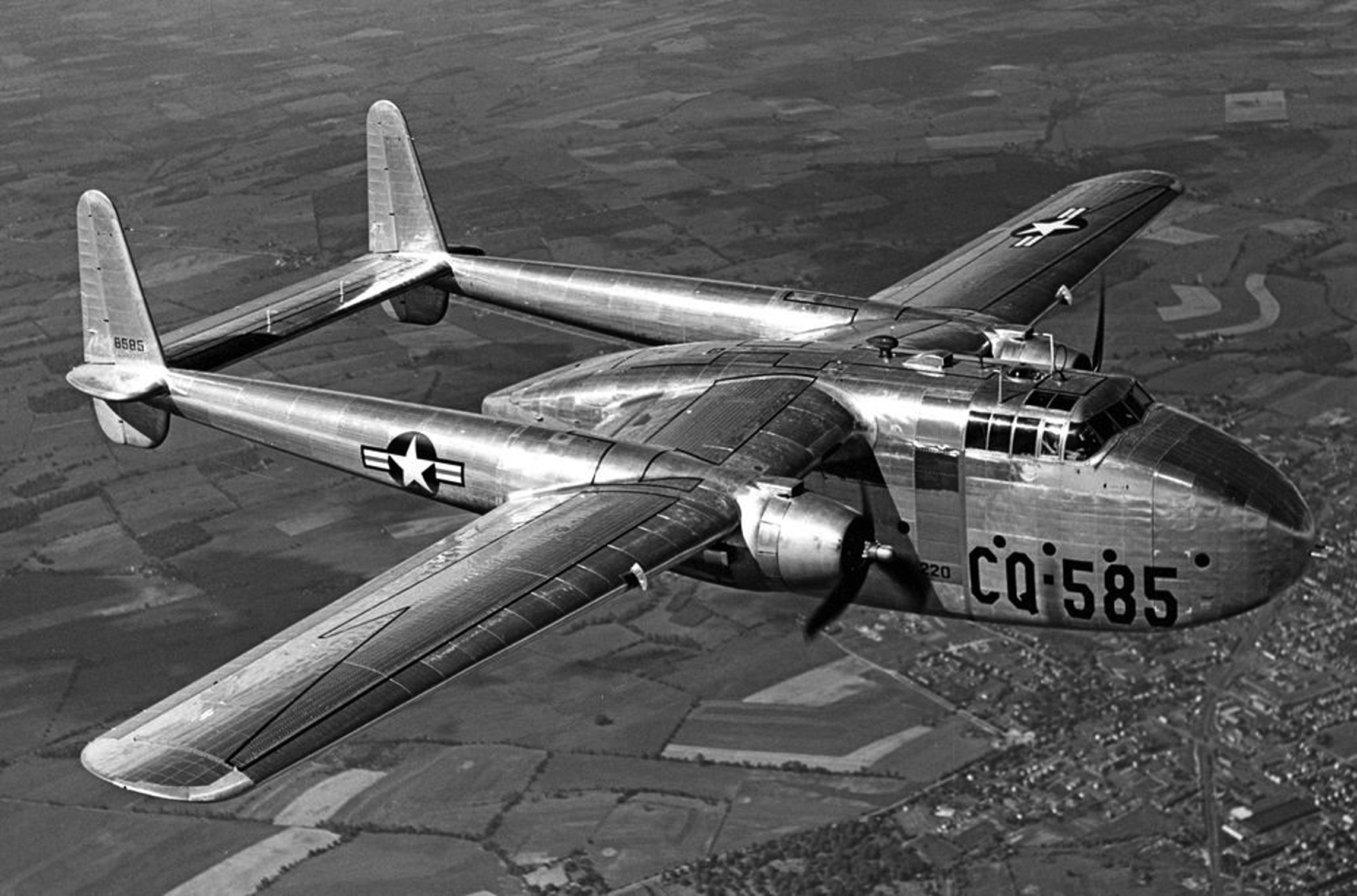 Sept. 10, 1944: The Fairchild C-82 Packet made its first flight. The Packet was a twin-engine, twin-boom cargo aircraft designed and built by Fairchild Aircraft. It was used briefly by the U.S. Army Air Forces and the successor U.S. Air Force following World War II. Developed by Fairchild, the C-82 was intended as a heavy-lift cargo aircraft to succeed prewar civilian designs like the Curtiss C-46 Commando and Douglas C-47 Dakota using non-critical materials in its construction, primarily plywood and steel, so as not to compete with the production of combat aircraft. However, by early 1943 changes in specifications resulted in plans for an all-metal aircraft. The aircraft was designed for a number of roles, including cargo carrier, troop transport, parachute drop, medical evacuation, and glider towing. It featured a rear-loading ramp with wide doors and an empennage set 14 feet off the ground that permitted trucks and trailers to back up to the doors without obstruction. Problems surfaced almost immediately, as the aircraft was found to be underpowered and its airframe inadequate for the heavy lifting it was intended to perform. As a result, the Air Force turned to Fairchild for a solution to the C-82’s shortcomings. A redesign was quickly performed under the designation XC-82B, which would overcome all of the C-82A’s initial problems. During the Berlin Blockade, five C-82 aircraft carried large disassembled earthmoving equipment into the city to enable the construction of Berlin Tegel Airport in the fall of 1948. 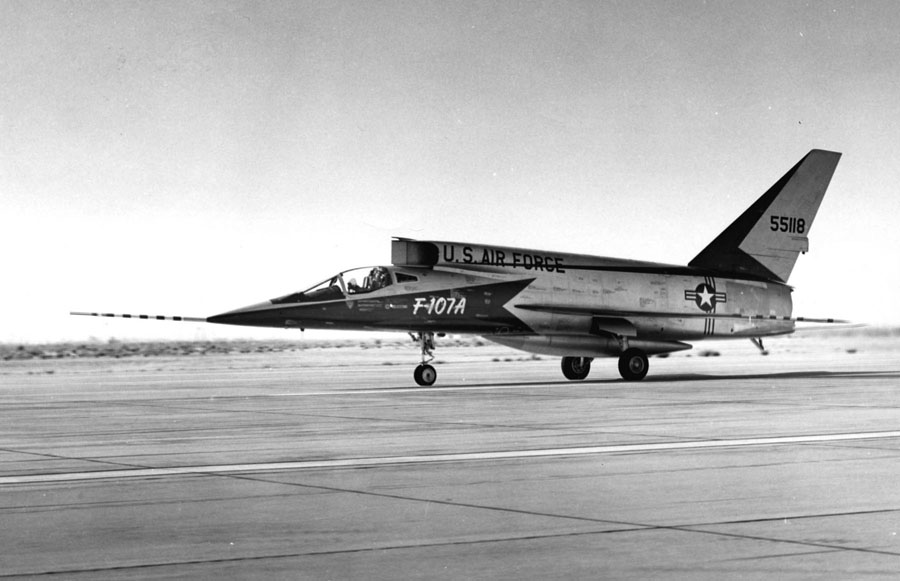 Sept. 10, 1956: North American Aviation test pilot Joel Robert “Bob” Baker made the first flight of the F-107A-NA 55-5118, a pre-production tactical fighter bomber, reaching a speed of Mach 1.03. On landing the drogue parachute did not deploy and due to the high speed on rollout, the nose gear strut collapsed, causing minor damage to the new aircraft. The F-107A was designed as a Mach 2 plus fighter bomber capable of carrying nuclear weapons. The plan to carry a Mark 7 bomb in a centerline recess in the aircraft’s belly resulted in the radical appearance of the airplane, with the engine intake mounted above and behind the cockpit. Based on the F-100 Super Sabre, it was originally designated F-100B, but this was changed to F-107A prior to the first flight.

The North American Aviation F-107A was a single-seat, single-engine supersonic fighter bomber. It was equipped with a very sophisticated stability augmentation system. The F-107A was 61 feet, 10 inches long with a wingspan of 36 feet, 7 inches and height of 19 feet, 8 inches. The F-107A was in competition with Republic’s F-105 Thunderchief, which was selected by the Air Force for production. Only three F-107A test aircraft were built.