Oct. 16, 1953: Heavy gross weight takeoff tests were completed on the Boeing B-47 Stratojet bomber, extending the capability of this weapon system. 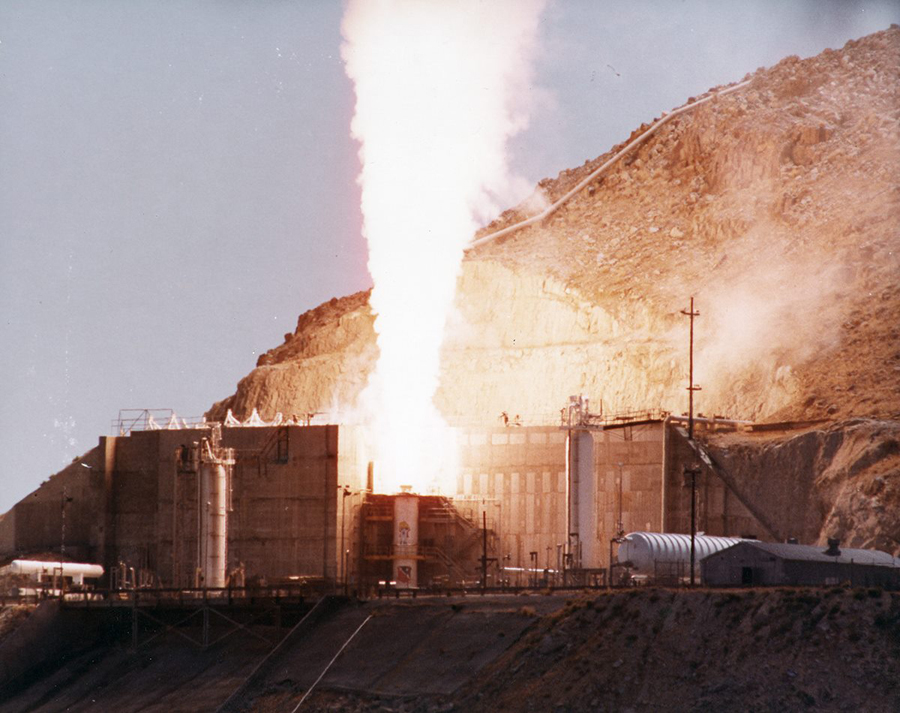 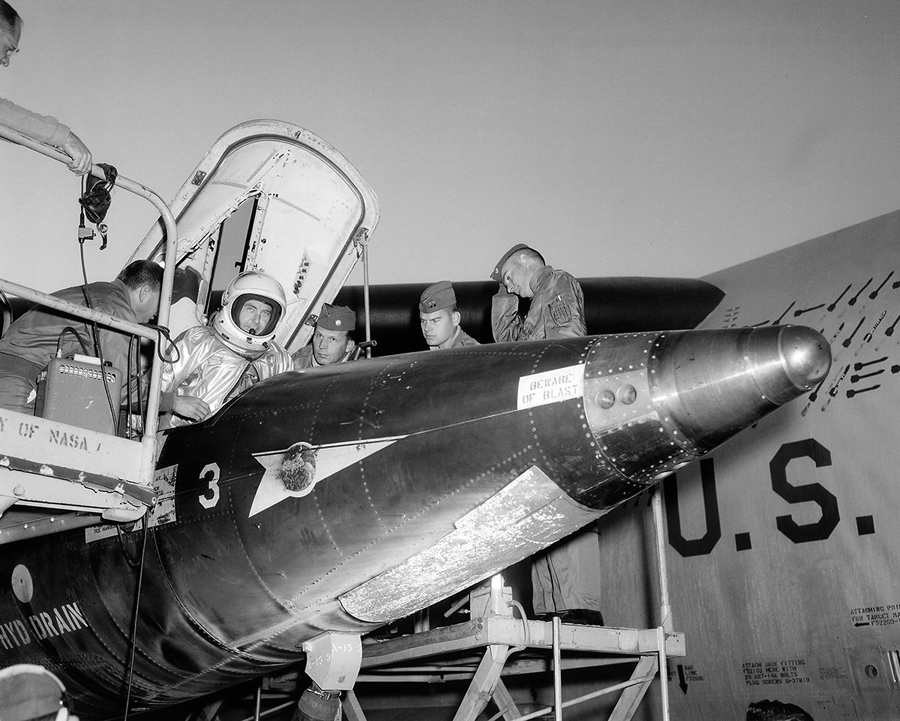 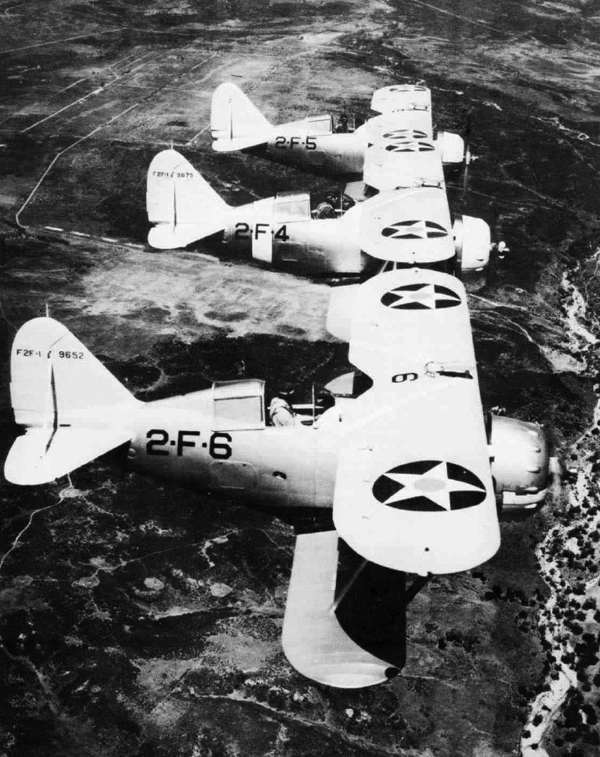 Oct. 18, 1933: The Grumman F2F, the companyís first single-seat, enclosed cockpit aircraft, made its first flight. The F2F was a biplane fighter aircraft with retractable undercarriage, serving as the standard fighter for the U.S. Navy between 1936 and 1940. It was designed for both carrier- and land-based operations. 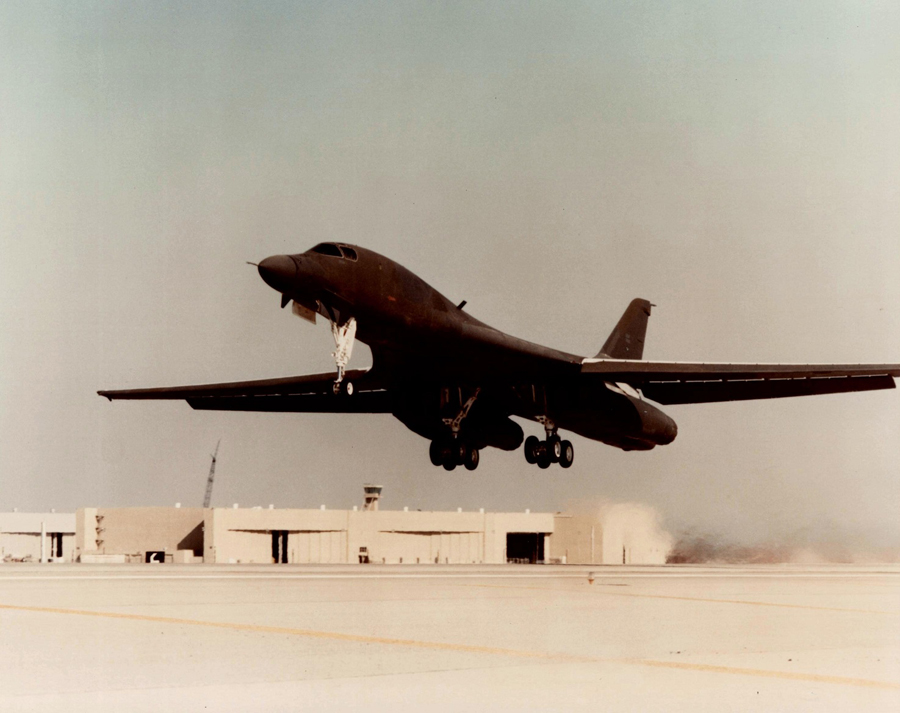 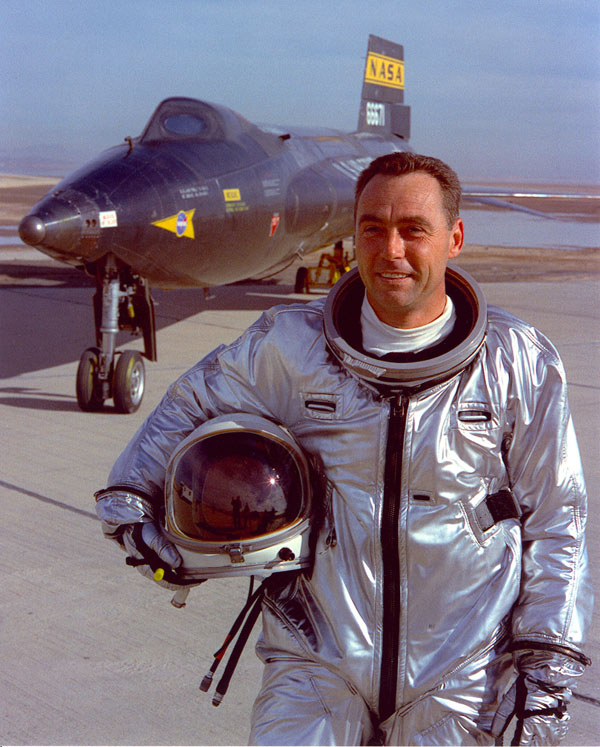 Oct. 19, 1967: Air Force test pilot Maj. William “Pete” Knight won the Harmon International Aviator’s trophy for “exceptional individual piloting performance.” In winning the award, Knight joined an illustrious list of prior winners including Howard Hughes, Lt. Gen. James Doolittle, Capt. Chuck Yeager, Gen. Curtis LeMay, Scott Crossfield, Joe Walker, Fitz Fulton and many others. Knight was a test pilot, Vietnam War combat pilot and astronaut. Starting in 1958, following his graduation from both U.S. Air Force Institute of Technology and the Air Force Experimental Flight Test Pilot School (Class 58C), Knight served as a test pilot at Edwards Air Force Base, Calif. He was a project test pilot for the F-100 Super Sabre, F-101 Voodoo, F-104 Starfighter and later, T-38 Talon and F-5 Freedom Fighter test programs. In 1960, he was one of six test pilots selected to fly the X-20 Dyna-Soar, which was slated to become the first winged orbital space vehicle capable of lifting reentries and conventional landings. After the X-20 program was canceled in 1963, he completed the astronaut training curriculum through the Aerospace Research Pilot School (Class 63A) at Edwards AFB and was selected to fly the North American X-15. 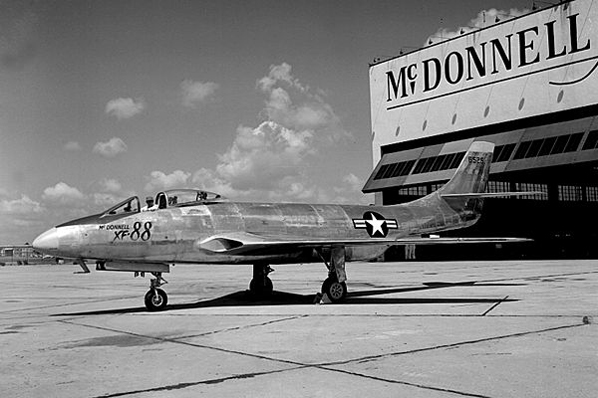 Oct. 20, 1948: The XF-88 Voodoo made its first flight at Edwards Air Force Base, Calif., flown by McDonnell test pilot Robert M. Edholm. The high-tailed, twin-engine aircraft won the Air Force’s long-range Penetration Fighter competition but never went into production. The basic design later resurfaced in the company’s highly successful F-101 program. McDonnell also proposed a naval version of the XF-88, a two-seat operational trainer, and a reconnaissance variant, but none were built. Both prototypes were scrapped by 1958. 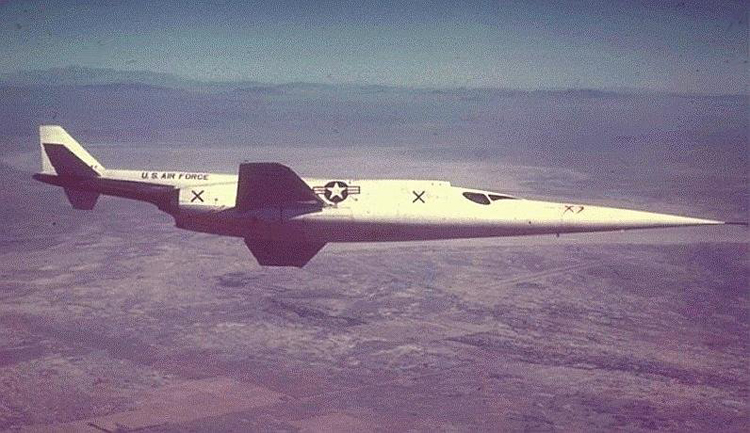 Oct. 20, 1952: Douglas Aircraft Company test pilot William Barton “Bill” Bridgeman made the first test flight of the X-3 twin-engine supersonic research airplane. During a high-speed taxi test five days earlier, Bridgeman and the X-3 had briefly been airborne for approximately one mile over the dry lake bed, but on this flight he spent approximately 20 minutes familiarizing himself with the new airplane. For more on the X-3, visit https://www.aerotechnews.com/blog/2021/07/18/douglas-x-3-stiletto-accomplished-much-but-not-what-was-originally-planned/ 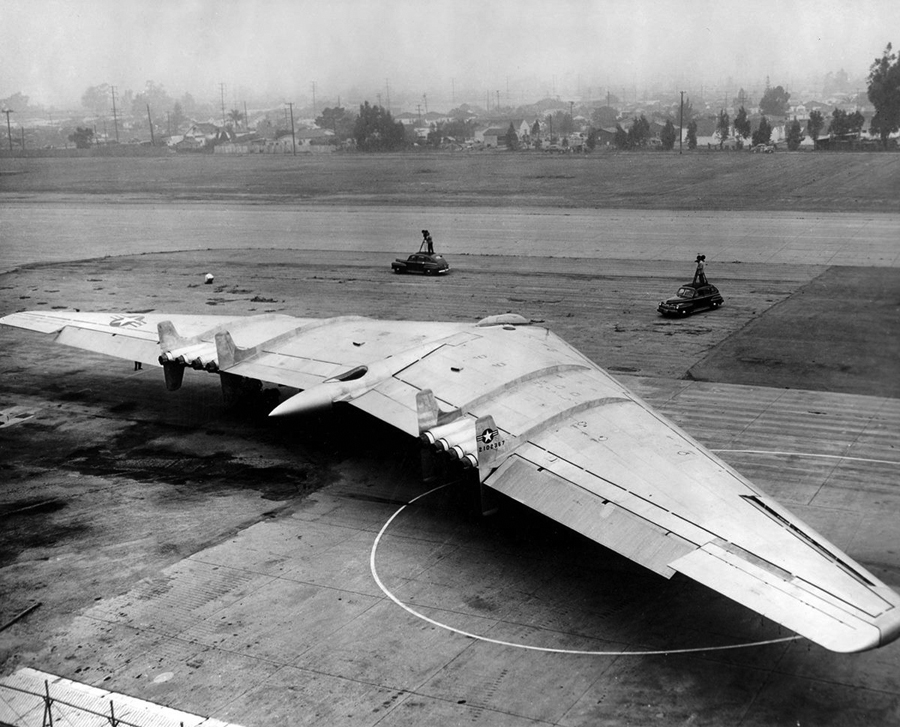 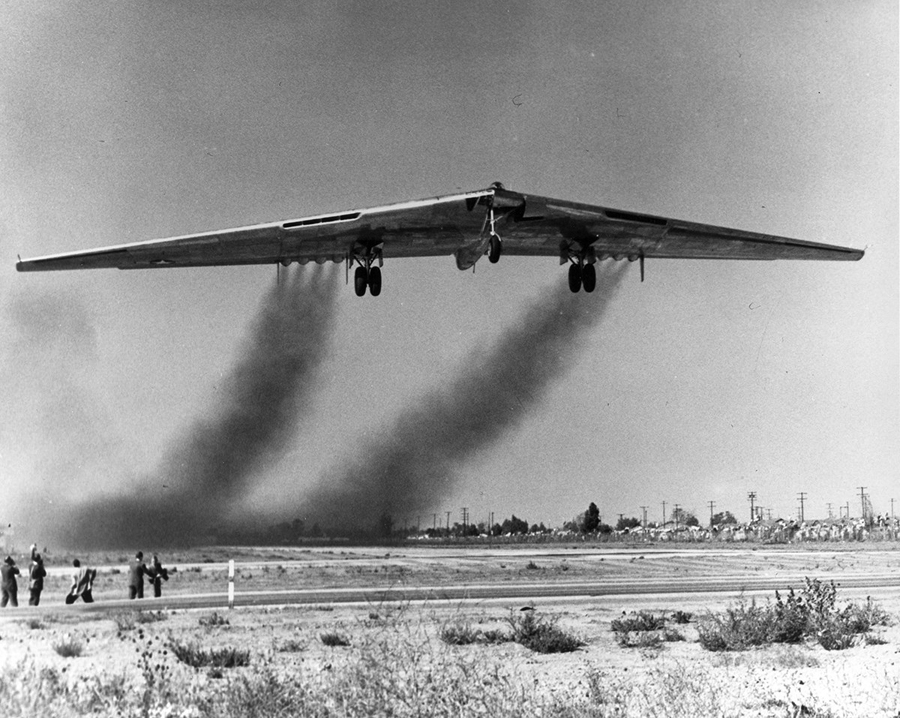 Oct. 21, 1947: The YB-49, tail number 42-102367, took off from Northrop Field in Hawthorne, Calif., with Northrop Chief Test Pilot Max R. Stanley at the controls. The aircraft flew to Muroc Air Force Base (now Edwards), Calif., for flight testing. The YB-49 had been converted from the second YB-35 pre-production test aircraft. The original Flying Wing’s four Pratt & Whitney Wasp Major radial engines were replaced by turbojet engines and several aerodynamic improvements were made. The YB-49 had a length of 53 feet, 1 inch, wingspan of 172 feet and overall height of 15 feet, 2 inches. It weighed 88,442 pounds empty and its Maximum Takeoff Weight was 193,938 pounds. During testing the YB-49 reached a maximum speed of 493 mph at 20,800 feet, and cruise speed was 429 mph. Its combat radius was 1,403 nautical miles. Only two Northrop YB-49s were built and they were tested by Northrop and the Air Force for nearly two years. Though an additional nine YB-35s were ordered converted, the B-49 was not placed into production. The second ship, YB-49 42-102368, disintegrated in flight during a test flight north of Muroc Air Force Base, June 5, 1948, killing the entire crew, which included Capt. Glen Edwards. The name of Muroc was changed to Edwards Air Force Base in his honor. YB-49 42-102367 was destroyed by fire following a taxiing accident at Edwards, March 15, March 1950. The program was cancelled on the same day. 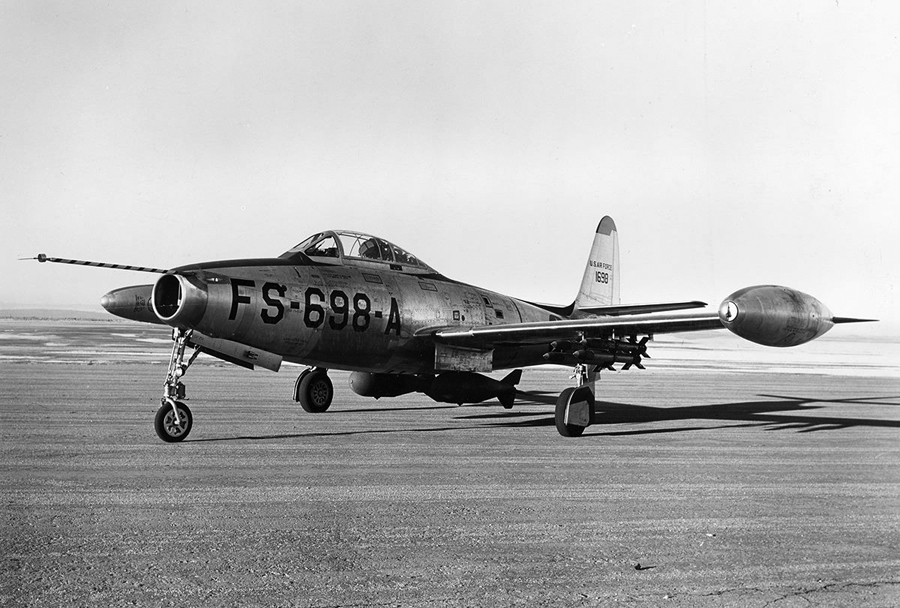 Oct. 21, 1955: Republic Aviation Corporation conducted a cross-country flight of an F-84G equipped with a Bausch & Lomb periscope system. The flight, from Edwards to Farmingdale, N.Y., was to evaluate the feasibility of a flush-mounted cockpit for the XF-103 program, which was canceled in August 1957.

Oct. 21, 1956: Actor William Holden and other Hollywood personalities attended the opening of the new Base Theater at Edwards Air Force Base, Calif., and viewed a screening of “Toward the Unknown,” which had been filmed on the base. This marked the official opening of the new base theater. 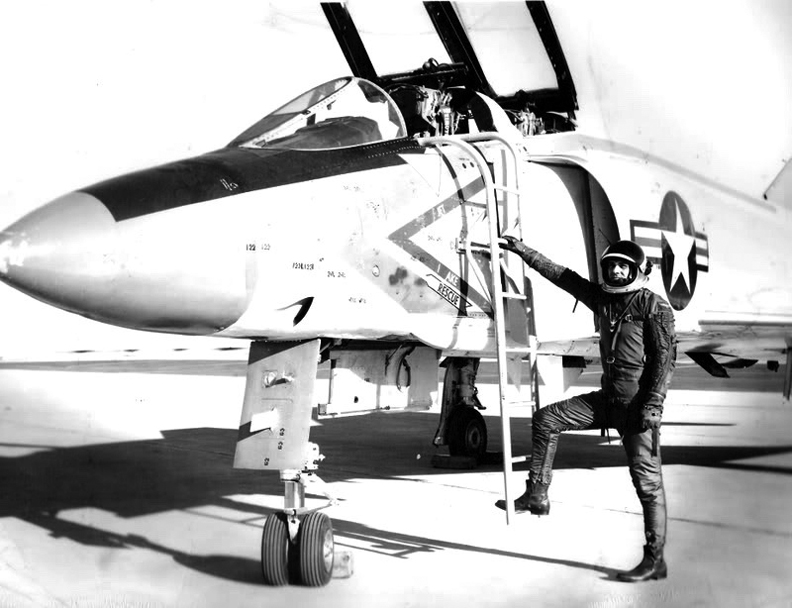 Oct. 21, 1959: McDonnell Aircraft Corporation test pilot Gerald “Zeke” Huelsbeck was killed while test flying the first prototype YF4H-1 Phantom II. The U.S. Navy was trying for a world record with the F4H, and Huelsbeck, flying near Edwards Air Force Base, Calif., was testing various flight plans for a high-altitude zoom, looking for one to recommend to the Navy test pilot who would fly the record attempt. During the flight, an engine access door blew loose, flames shot through the engine compartment, and the F4H crashed. Huelsbeck did eject but was too low, and his parachute did not open. The prototype crashed in an open area near Mount Pinos in the Los Padres National Forest, about 70 miles southwest of Edwards. 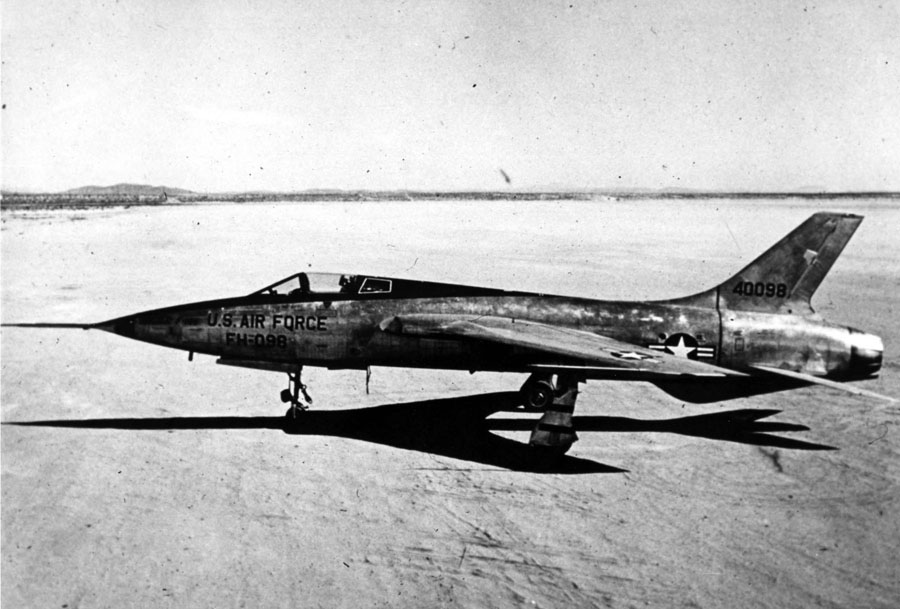 Oct. 22, 1955: The Republic F-105 Thunderchief, with Republic pilot “Rusty” Roth at the controls, made its first flight. The Thunderchief was an American supersonic fighter-bomber used by the U.S. Air Force. Capable of Mach 2, it conducted the majority of strike bombing missions during the early years of the Vietnam War; it was the only American aircraft to have been removed from combat due to high loss rates. It was originally designed as a single-seat, nuclear-attack aircraft; a two-seat Wild Weasel version was later developed for the specialized Suppression of Enemy Air Defenses role against surface-to-air missile sites. The F-105 was commonly known as the “Thud” by its crews. As a follow-on to the Mach 1-capable North American F-100 Super Sabre, the F-105 was also armed with missiles and a rotary cannon; however, its design was tailored to high-speed low-altitude penetration, carrying a single nuclear weapon internally. The Thunderchief entered service in 1958. The single-engine F-105 could deliver a greater bomb load than some American heavy bombers of World War II, such as the Boeing B-17 Flying Fortress and Consolidated B-24 Liberator. The F-105 was one of the primary attack aircraft of the Vietnam War. Over 20,000 Thunderchief sorties were flown, with 382 aircraft lost including 62 operational (non-combat) losses (out of the 833 produced). Although less agile than smaller MiG fighters, Air Force F-105s were credited with 27.5 kills. The Thunderchief was later replaced as a strike aircraft over North Vietnam by both the McDonnell Douglas F-4 Phantom II and the swing-wing General Dynamics F-111 Aardvark. However, the “Wild Weasel” variants of the F-105 remained in service until 1984, after being replaced by the specialized F-4G “Wild Weasel V.”