April 2, 1942: After loading 16 North American Aviation B-25B Mitchell medium bombers and their crews of the 17th Bombardment Group (Medium) at NAS Alameda, Calif., the recently commissioned U.S. Navy aircraft carrier USS Hornet (CV-8) departed San Francisco Bay with her escorts and headed for a secret rendezvous with Vice Admiral William F. Halsey, Jr., and Task Force 16. The strike group was commanded by Lt. Col. Jimmy Doolittle, U.S. Army Air Corps. Until the second day at sea, only six U.S. military officers knew of the mission. Sixteen days later, the B-25s took off from the Hornet and bombed Tokyo. It was the first air operation to strike the Japanese archipelago, and although the raid caused comparatively minor damage it demonstrated that the Japanese mainland was vulnerable to American air attacks. The operation called for the aircraft to takeoff without a fighter escort; bomb Japanese military and industrial targets; and continue westward to land in China. 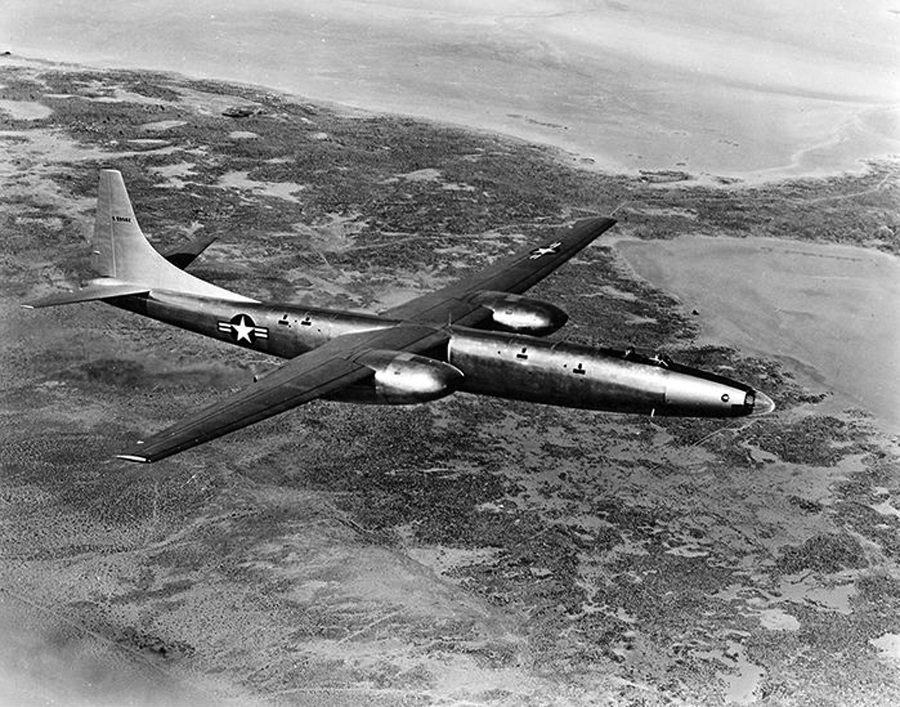 April 2, 1947: After a month of taxi testing, the Convair XB-46 took off from San Diego, Calif., on its first flight, heading to Muroc Army Air Field (now Edwards AFB). The XB-46 was a single example of an experimental medium jet bomber which was developed in the mid-1940s but which never saw production or active duty. It competed with similar designs, the North American XB-45 and Martin XB-48, all of which saw little use after the successful development of the Boeing XB-47. Basic flight testing took place for five months, and by September 1947 it was concluded after 127 hours aloft on 64 flights by both the Convair and Army Air Force test pilots. The B-46 program was cancelled in August 1947, even before flight testing had been completed, because it was already obsolete. 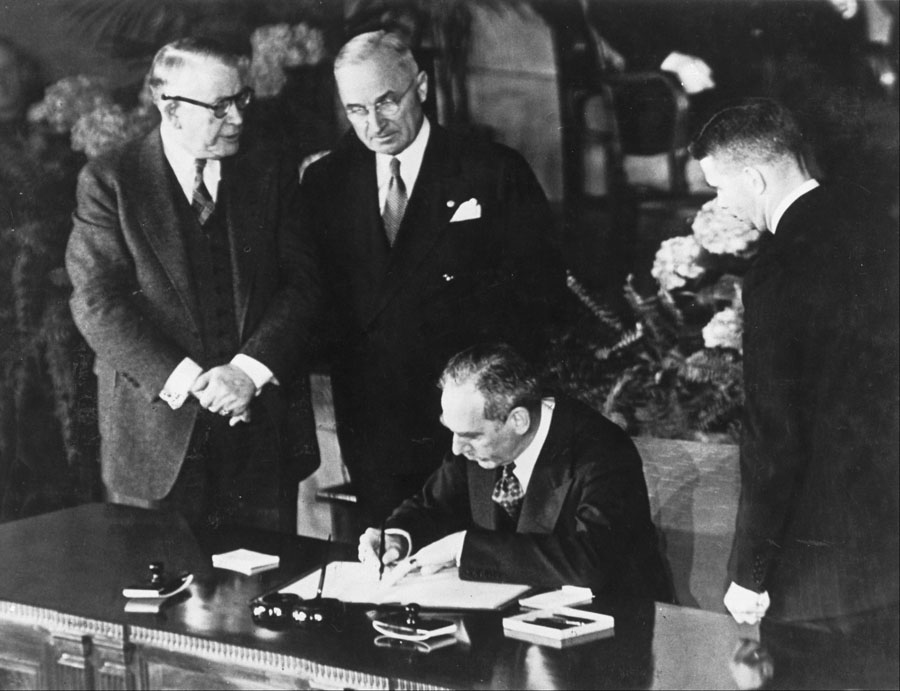 April 3, 1949: Twelve nations, including the United States, signed the North Atlantic Treaty in Washington, D.C. In this photograph, U.S. Secretary of State Dean Acheson signs the treaty on behalf of the United States. The original member states were Belgium, Canada, Denmark, France, Iceland, Italy, Luxembourg, the Netherlands, Norway, Portugal, the United Kingdom and the United States. Today, there are 30 member countries 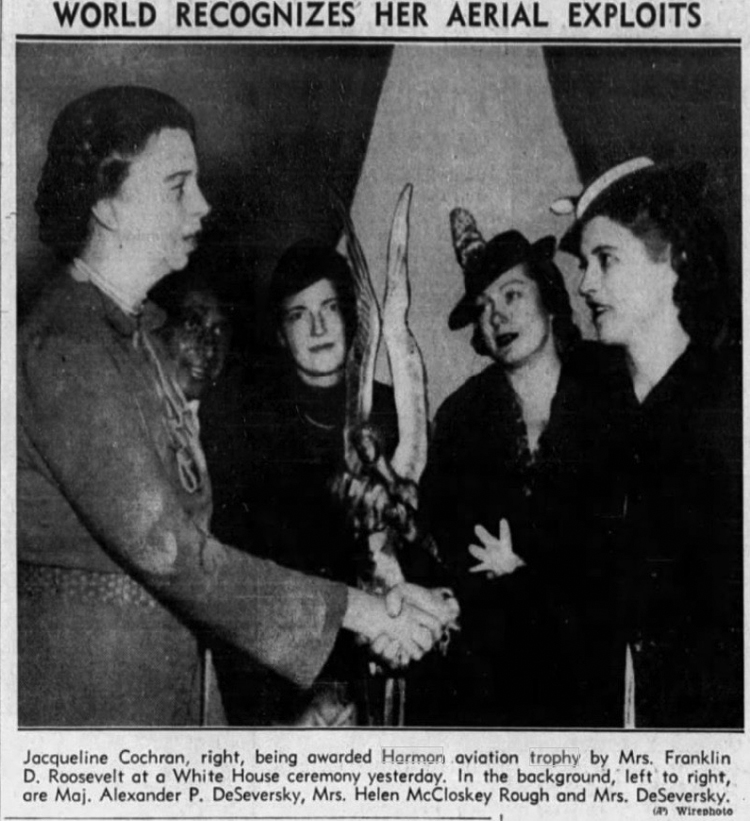 April 4, 1938: Eleanor Roosevelt presented Jacqueline Cochran the Harmon trophy for the outstanding American aviatrix of 1937. The trophy was awarded by the Ligue Internationale Des Aviateurs. In 1937, Cochran broke the national women’s record for 1,000 kilometers and on three occasions established new national records for the 100-kilometer distance. She also set a world’s record for women over a three-kilometer course.

This was the first of five Harmon Trophies which were awarded to Jackie Cochran. 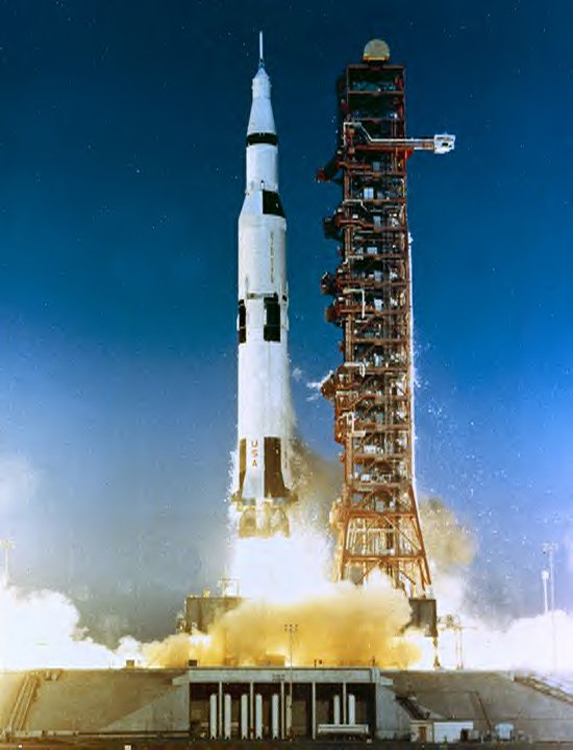 April 4, 1968: Apollo 6, the second and last un-manned Apollo mission, lifted off from Launch Complex 39A at the Kennedy Space Center in Florida. The purpose of the flight was to determine that an all-up Saturn V could attain Trans Lunar Injection. Because of engine difficulties, it did not do so, but data from the test gave mission planners confidence to go ahead with manned flights.

April 4, 1975: As the war in Vietnam came to an end, U.S. officials decided to evacuate 2,000 orphans – most of them in the care of an American hospital in Saigon in an operation called Operation Babylift. The first flight was aboard a U.S. Air Force Lockheed C-5A Galaxy heavy lift transport. A medical team from Clark Air Base, The Philippines, was aboard when the huge transport plane landed at Tan Son Nhut Air Base in Saigon. When it was discovered that there would be about 250 orphans aboard, many of them sick or injured, another medical team from a C-141 Starlifter volunteered to accompany the team for the outbound flight.

When the Galaxy took off from Saigon at 4 p.m., there were 328 people aboard, including flight crew, medical teams, orphans and their escorts, as well as other U.S. personnel. The C-5 quickly climbed to 23,000 feet, but just a few minutes after takeoff, the locks of the rear loading ramp failed. Explosive decompression hurled people and equipment throughout the airplane which instantly filled with fog. The airplane was severely damaged with two hydraulic systems inoperative and many flight control cables severed. Unable to maintain flight, at about 4:45 p.m., the Galaxy touched down in a rice paddy two miles short of the runway at 270 knots. It slid for a quarter mile, became airborne for another half mile, then touched down and slid until it hit a raised dike and broke into four sections. 138 people were killed in the crash. 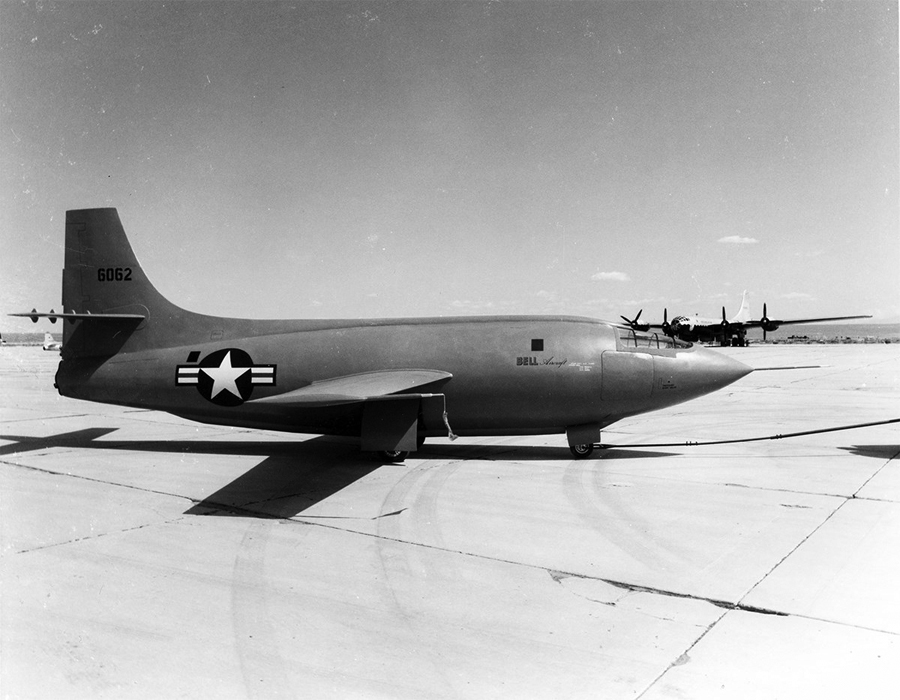 April 5, 1947: The second prototype of the Hughes XF-11 twin-boom reconnaissance aircraft made its first complete flight (takeoff and landing), piloted by Howard Hughes. The XF-11 was a prototype military reconnaissance aircraft, designed and flown by Howard Hughes and built by Hughes Aircraft for the U.S. Army Air Forces. Although 100 F-11s were ordered in 1943, only two prototypes and a mockup were completed. During the first XF-11 flight in 1946, Howard Hughes crashed the aircraft in Beverly Hills, Calif. The production aircraft had been canceled in May 1945, but the second prototype was completed and successfully flown in 1947. For more on the XF-11, visit https://www.aerotechnews.com/blog/2020/06/26/howard-hughes-tempts-fate-the-story-of-the-xf-11/ 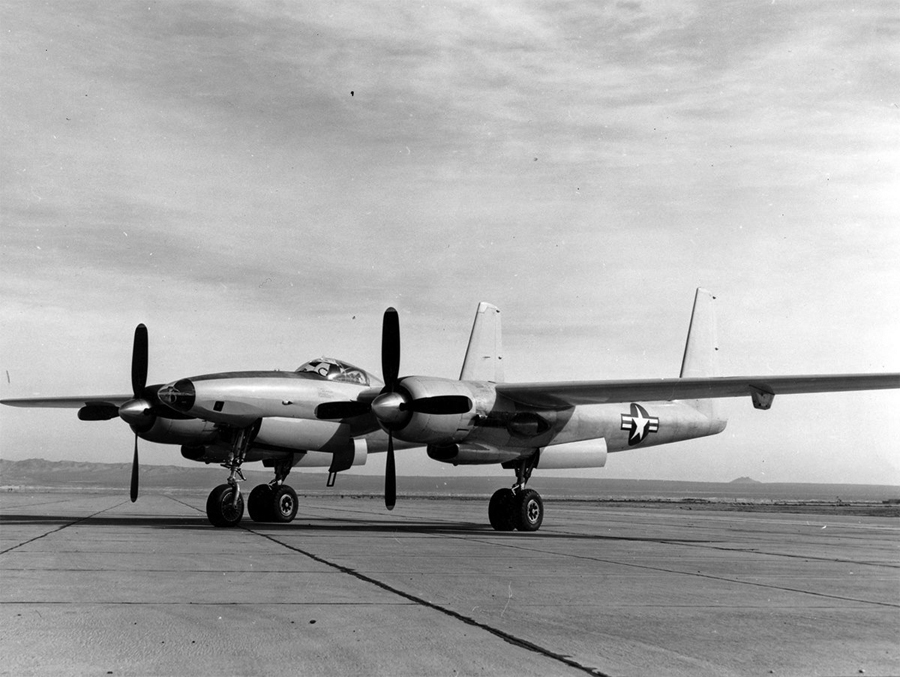 April 5, 1947: The No. 1 Bell X-1 (s/n 46-062) and its JTB-29A mother ship arrived at Muroc Army Airfield (now Edwards AFB, Calif.) from the Bell Facility in New York, following modifications in preparation for turning the aircraft over to the National Advisory Committee on Aeronautics (NACA) for further flight testing. This was the first time that the No. 1 aircraft had been at Muroc. This is an undated Edwards History Office photograph. 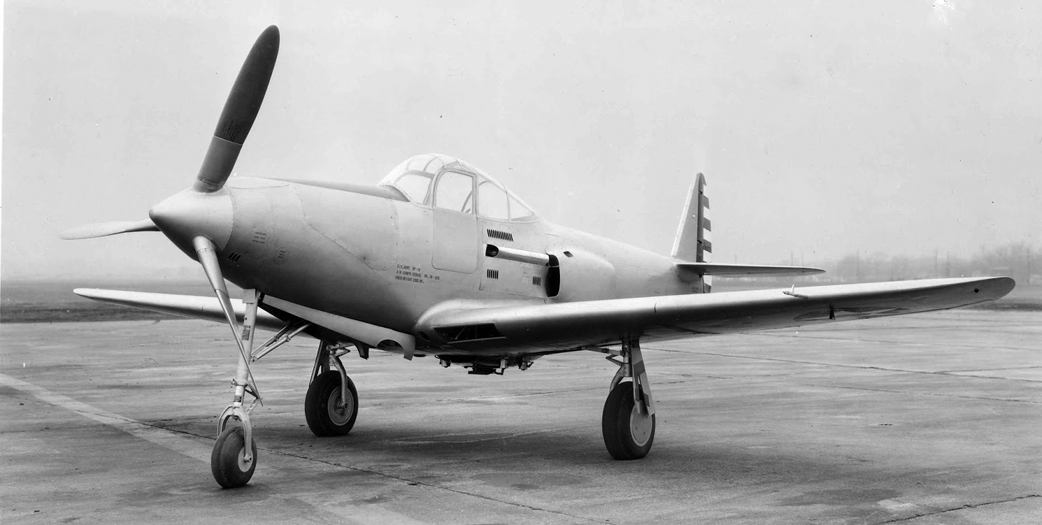 April 6, 1938: After being shipped by truck from the Bell Aircraft Company factory at Buffalo, N.Y., the XP-39 prototype made its first flight at Wright Field, Ohio, with test pilot James Taylor in the cockpit. During the test flight, Taylor flew the XP-39 to 390 mph at 20,000 feet. The Bell XP-39 Airacobra was a single-place, single-engine prototype fighter with a low wing and retractable tricycle landing gears. The airplane was primarily built of aluminum, though control surfaces were fabric covered. After initial flight testing, the XP-39 was sent to the National Advisory Committee for Aeronautics Langley memorial Aeronautical Laboratory at Hampton, Va. The prototype was tested in the Full-Scale Wind Tunnel. Improvements in aerodynamics were recommended and Bell rebuilt the airplane as the XP-39B. A total of 9,584 Bell P-39 Airacobras were built during World War II. More than half were sent to the Soviet Union. 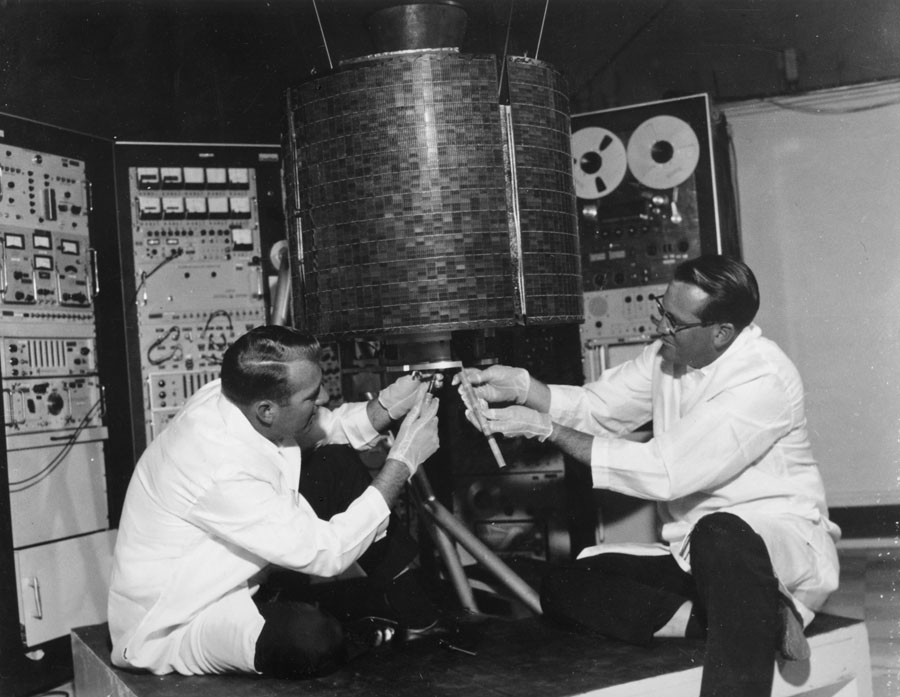 April 6, 1965: Intelsat I, nicknamed Early Bird, the first commercial communications satellite was placed in geosynchronous orbit. It was built by the Space and Communications Group of Hughes Aircraft Company (later Hughes Space and Communications Company, and now Boeing Satellite Systems) for COMSAT, which activated it on June 28, 1965. It was based on the Syncom series of satellites that Hughes had previously built for NASA to demonstrate that communications via synchronous-orbit satellite were feasible. It helped provide the first live TV coverage of a spacecraft splashdown, that of Gemini 6 in December 1965. Originally slated to operate for 18 months, Early Bird was in active service for 4 years and 4 months, being deactivated in January 1969, although it was briefly activated in June of that year to serve the Apollo 11 flight when the Atlantic Intelsat satellite failed. It was deactivated again in August 1969 and has been inactive since that time (except for a brief reactivation in 1990 to commemorate its 25th launch anniversary), although it remains in orbit. The Early Bird satellite was the first to provide direct and nearly instantaneous contact between Europe and North America, handling television, telephone and fax transmissions. It was fairly small, measuring nearly 2.5 × 2 feet, and weighing 76 pounds. 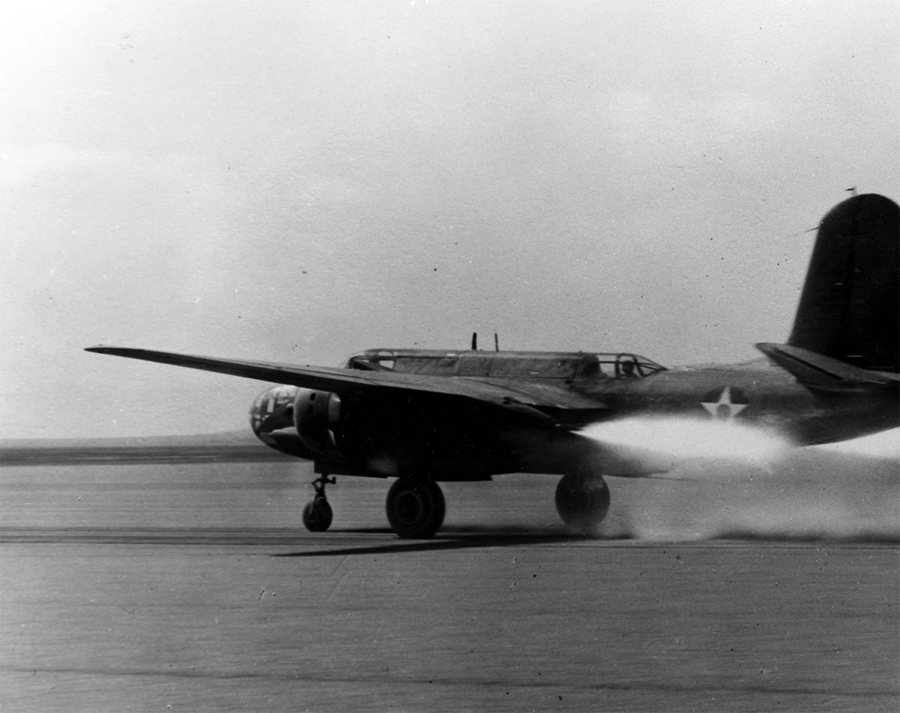 April 7, 1942: Maj. Paul H. Dane flew a Douglas A-20 Havoc equipped with small liquid-fuel rocket boosters in the first Rocket Assisted Take-Off test. An experimental 1,000-pound thrust unit was installed in the aft end of each engine nacelle. The Havoc was an American medium bomber, attack aircraft, night intruder, night fighter, and reconnaissance aircraft of World War II. Designed to meet an Army Air Corps requirement for a bomber, it was ordered by France for their air force before the USAAC decided it would also meet their requirements. French DB-7s were the first to see combat; after the fall of France the bomber, under the service name Boston continued with the Royal Air Force. From 1941, night fighter and intruder versions were given the service name Havoc. In 1942 U.S. Army Air Force A-20s saw combat in North Africa. It served with several Allied air forces, principally the United States Army Air Forces, the Soviet Air Forces, Soviet Naval Aviation, and the Royal Air Force of the United Kingdom. A total of 7,478 aircraft were built, of which more than a third served with Soviet units. It was also used by the air forces of Australia, South Africa, France, and the Netherlands during the war, and by Brazil afterwards. 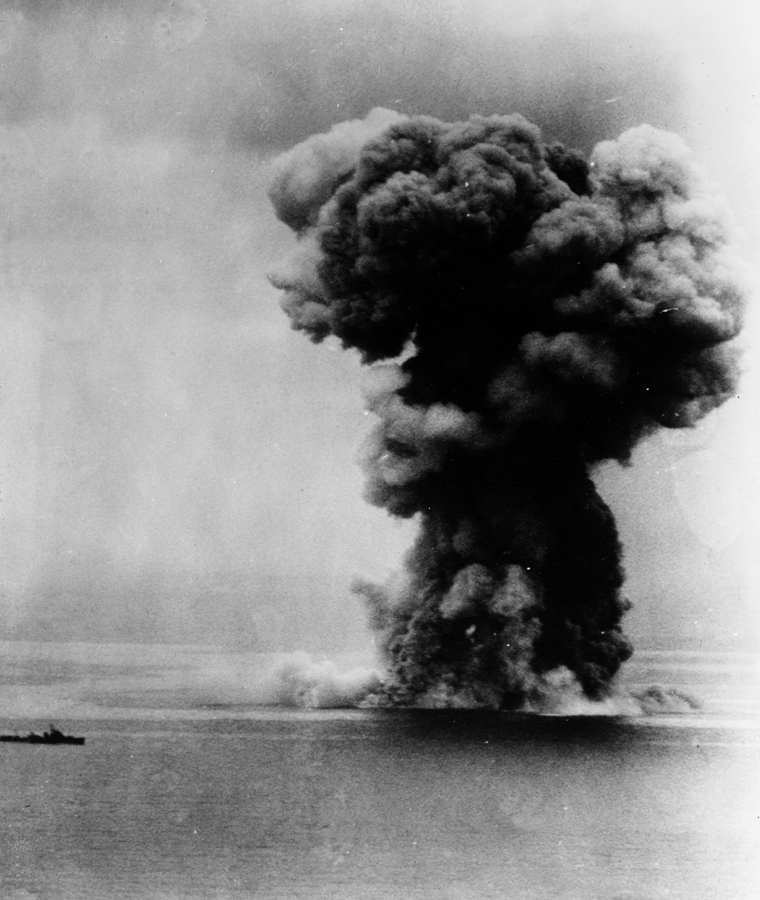 April 7, 1945: The Imperial Japanese battleship Yamato was sunk by American carrier-based bombers and torpedo bombers. During 1944, the balance of naval power in the Pacific decisively turned against Japan, and by early 1945, its fleet was much depleted and badly hobbled by critical fuel shortages in the home islands. In a desperate attempt to slow the Allied advance, Yamato was dispatched on a one-way mission to Okinawa in April 1945, with orders to beach herself and fight until destroyed, thus protecting the island. The task force was spotted south of Kyushu by U.S. submarines and aircraft and sunk. 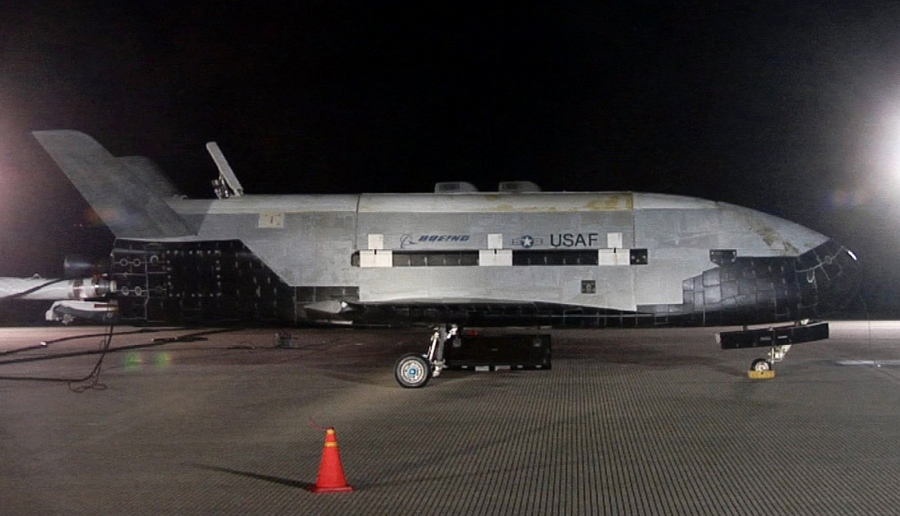 April 7, 2006: The Boeing X-37 made its first free flight. The Boeing X-37, also known as the Orbital Test Vehicle, is a reusable robotic spacecraft. It is boosted into space by a launch vehicle, then re-enters Earth’s atmosphere and lands as a spaceplane. The X-37 is operated by the U.S. Space Force, and was previously operated by Air Force Space Command until 2019 for orbital spaceflight missions intended to demonstrate reusable space technologies. It is a 120-percent-scaled derivative of the earlier Boeing X-40. The X-37 began as a NASA project in 1999, before being transferred to the Department of Defense in 2004. The X-37 first flew during a drop test in 2006; its first orbital mission was launched in April 2010 on an Atlas V rocket, and returned to Earth in December 2010. Subsequent flights gradually extended the mission duration, reaching 780 days in orbit for the fifth mission, the first to launch on a Falcon 9 rocket. The latest mission, the sixth, launched on an Atlas V on May 17, 2020. 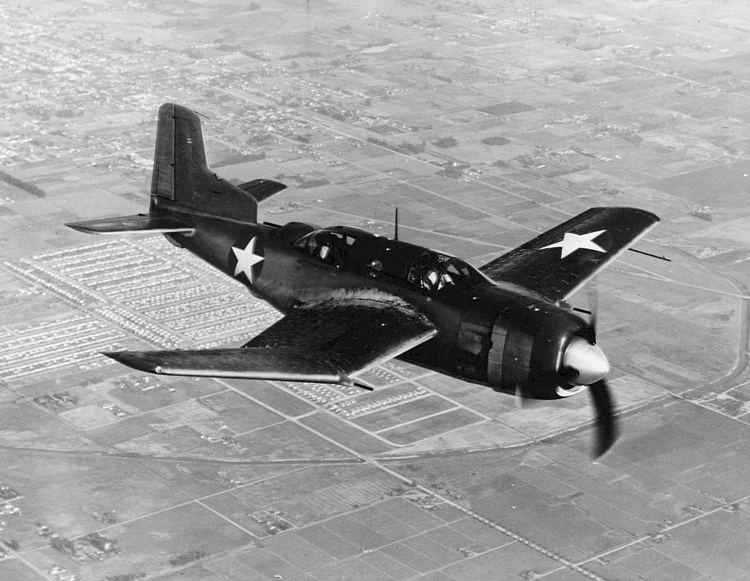 April 8, 1943: First flight of the Douglas BTD Destroyer, an U.S. dive/torpedo bomber developed for the U.S. Navy during World War II, made its first flight. A small number had been delivered before the end of the war, but none saw combat. The first production BTD-1s were completed in June 1944. By the time Japan surrendered in August 1945, only 28 aircraft had been delivered, and production was cancelled due to performance, along with other aircraft types that had been designed from the start as single-seaters, such as the Martin AM Mauler. None saw combat action. In any event, Heinemann and his team were already working on developing the single-seat BT2D that became the Douglas A-1 Skyraider.