July 23, 1956: Air Force Lt. Col. Frank Kendall “Pete” Everest became “The Fastest Man Alive” when he flew the Bell X-2 rocket plane to Mach 2.87 at 87,808 feet. The X-2 was air-dropped from Boeing EB-50D Superfortress 48-096, near Edwards Air Force Base, Calif. The X-2 was a joint project of the U.S. Air Force and the National Advisory Committee for Aeronautics (the predecessor of NASA). The rocketplane was designed and built by Bell Aircraft Corporation to explore supersonic flight at speeds beyond the capabilities of the earlier Bell X-1 and Douglas D-558-2 Skyrocket. In addition to the aerodynamic effects of speeds in the Mach 2.0–Mach 3.0 range, engineers knew that the high temperatures created by aerodynamic friction would be a problem, so the aircraft was built from stainless steel and K-Monel, a copper-nickel alloy. 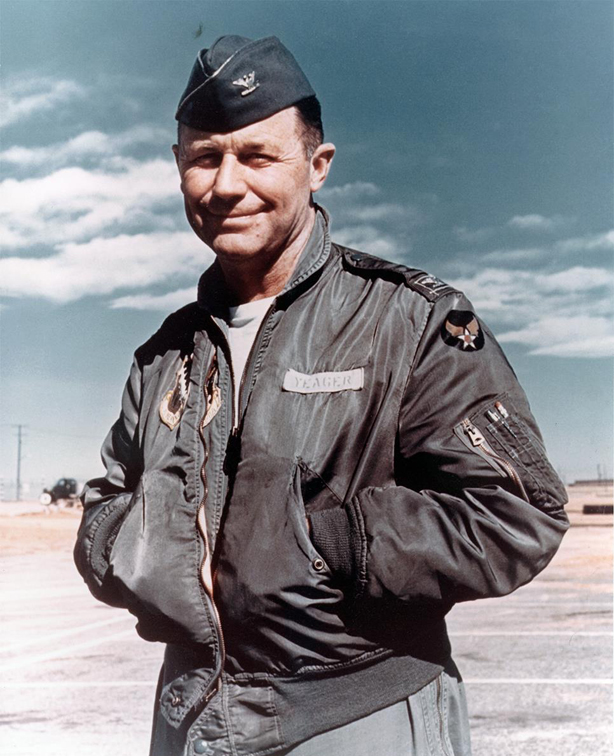 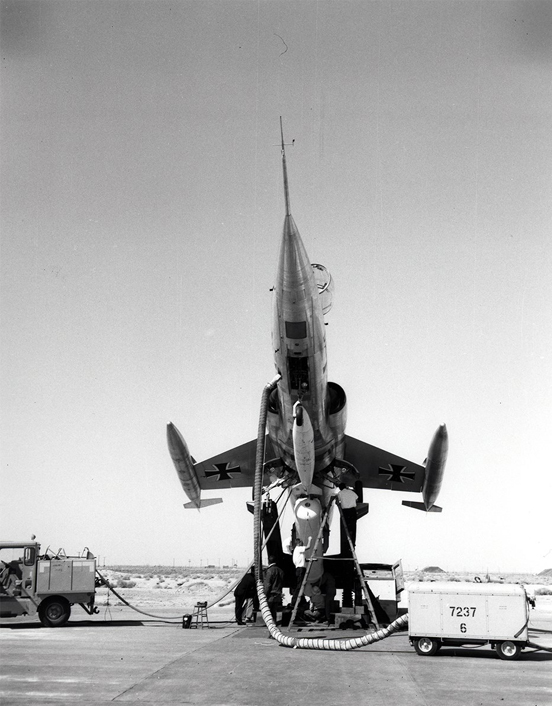 July 23, 1963: An F-104G Starfighter was successfully launched from a stationary platform as part of a Zero Length Launch (ZELL) test series for the West Germany air force. Like the earlier F-84 ZELMAL and F-110 ZEL test programs, the objective was testing the feasibility of a high-powered performance fighter launch from a stationary platform with the aid of a solid propellant booster motor. 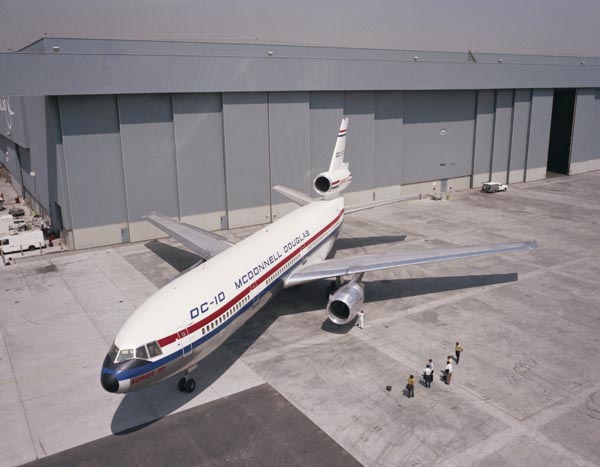 July 23, 1970: The first McDonnell Douglas DC-10 airliner rolled out at the company’s facility in Long Beach, Calif. The aircraft was used for flight testing and FAA certification. All told, the aircraft made 989 test flights, spending 1,551 hours in the air. It entered service with American Airlines on Aug. 12, 1972. The DC-10 was a wide-body aircraft designed for medium to long-range flights and could carry between 202 and 390 passengers. McDonnell Douglas also produced 60 of the KC-10A Extender air refueling tanker variant for the U.S. Air Force. 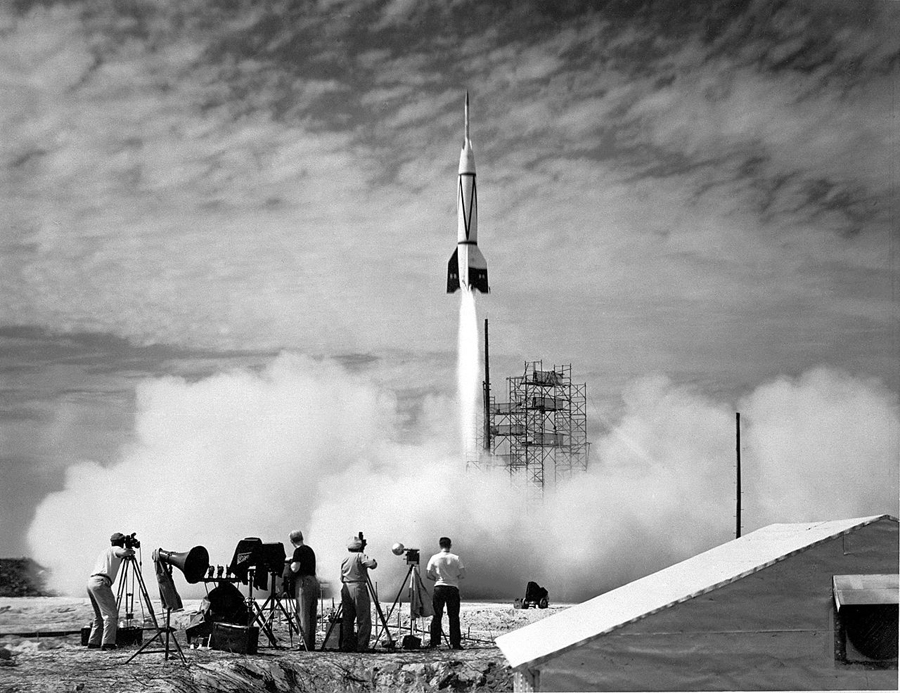 July 24, 1950: The first rocket launch at Cape Canaveral, Fla., took place. Bumper 8 was a two-stage rocket consisting of a captured German V-2 ballistic missile as the first stage and a WAC Corporal sounding rocket as the upper, second stage. The rocket lifted off from Launch Complex 3 at the Cape Canaveral Air Force Station and followed a ballistic trajectory over the Joint Long Range Proving Ground. This was a low-angle atmospheric flight. The WAC Corporal reached an altitude of 10 miles and traveled 200 miles downrange. The Bumper Project was a U.S. Army Ordnance Corps program, with overall responsibility contracted to General Electric Corporation. The V-2s used in the Bumper Project were modified to accept the WAC Corporal second stage. Compressed air was used to separate the stages after the V-2 engine was cut off. The V2, or Vergeltungswaffen 2 (also known as the A4, Aggregat 4) was a ballistic missile weighing 28,000 pounds when fully loaded. It carried a 2,200 pound explosive warhead of amatol, a mixture of TNT and ammonium nitrate. Propellant was a 75/25 mixture of ethanol and water with liquid oxygen as oxidizer. When launched, the rocket engine burned for 65 seconds, accelerating the rocket to 3,580 miles per hour (5,761 kilometers per hour) on a ballistic trajectory. The maximum range of the rocket was 200 miles (322 kilometers) with a peak altitude between 88 and 128 miles, depending on the desired range. On impact, the rocket was falling at 1,790 miles per hour. 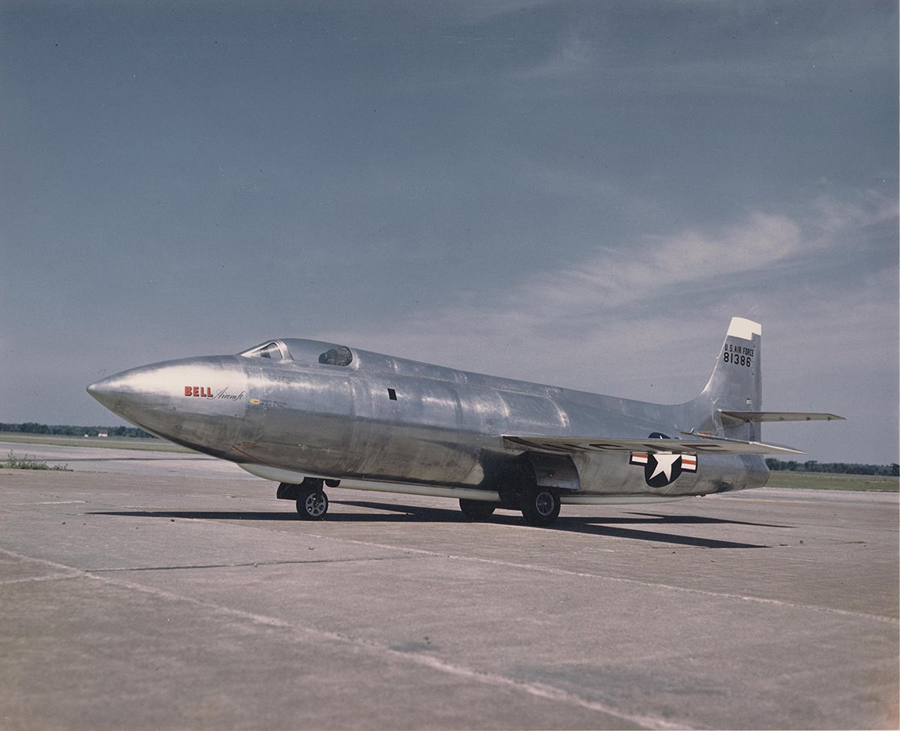 July 24, 1951: The Bell X-1D made its career’s first flight when it was air-dropped from an EB-50A mother ship to make an unpowered glide to the Rogers Dry Lakebed at Edwards Air Force Base, Calif. Jean Ziegler was the pilot. The X-1D was the first of the “second generation” X-1 rocket research planes to be completed; it was intended for heat-transfer research. 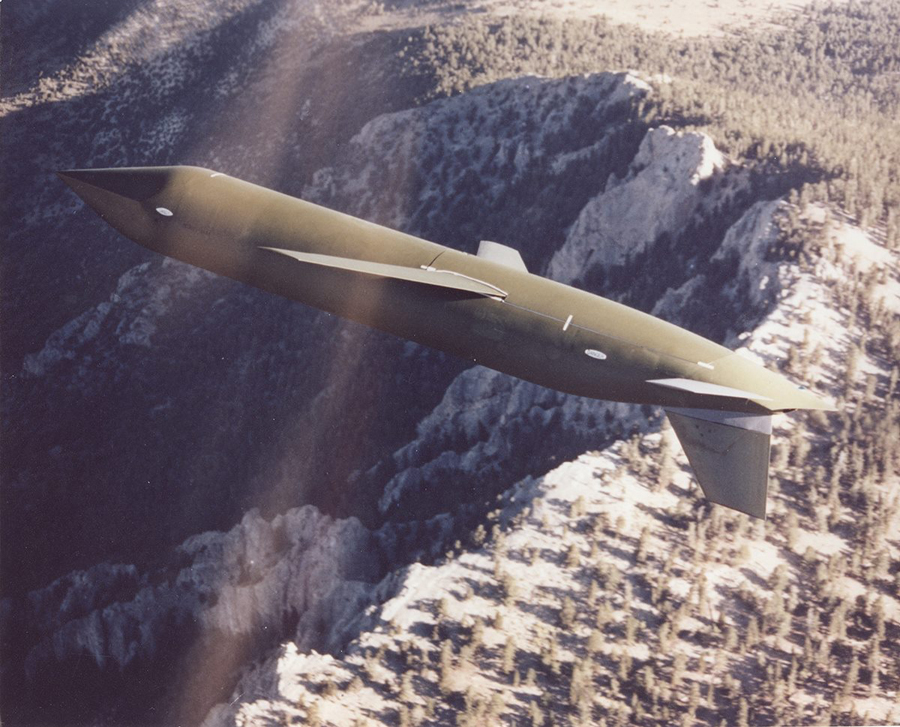 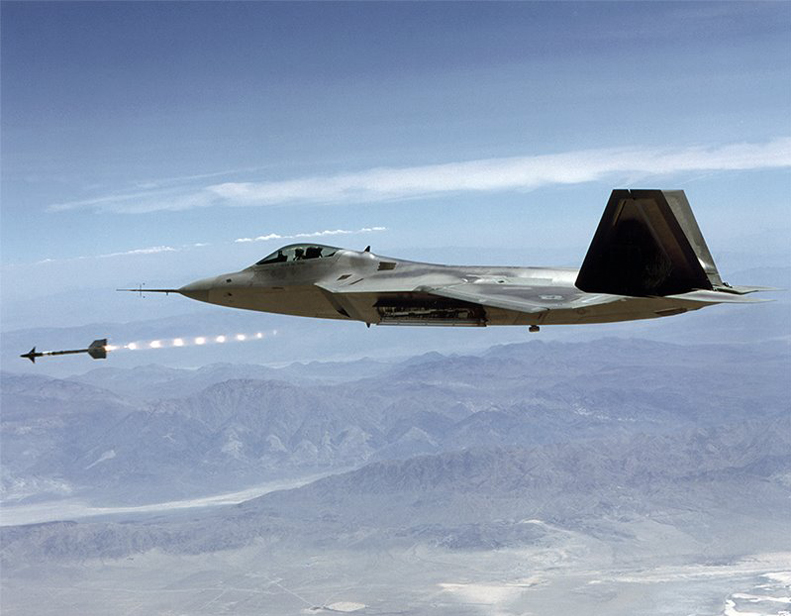 July 25, 2000: The F-22 CTF’s Raptor 02 successfully fired an AIM-9 Sidewinder missile over the China Lake test range. The test confirmed the F-22’s ability to launch an air-to-air missile from an internal weapons bay.

July 26, 1958: U.S. Air Force test pilot Capt. Iven Carl Kincheloe, Jr., died. Kincheloe took off from Edwards Air Force Base, Calif., in a Lockheed F-104 Starfighter acting as a chase plane for another F-104A, flown by a Lockheed test pilot Louis W. Schalk, Jr. As the two supersonic interceptors began their climb out from the runway, a small control cable deep inside Kincheloe’s fighter failed, allowing the inlet guide vane of the F-104’s engine to close.

With the suddenly decreased airflow, the engine lost power and the airplane started to descend rapidly. Kincheloe radioed, “Edwards, Mayday, Seven-Seventy-Two, bailing out.” While the early F-104 Starfighters had a Stanley Aviation Corporation Type B ejection seat that was catapulted or dropped by gravity from the bottom of the cockpit this particular aircraft was equipped with an improved Stanley Type C ejection seat.

With the Starfighter well below 2,000 feet, Kincheloe apparently thought that he needed to roll and invert the airplane before ejecting. This was not necessary and delayed his escape. By the time he had separated from the seat and could open his parachute, he was below 500 feet. The parachute did open, but too late, and Kincheloe was killed on impact. His airplane crashed into the desert floor just over nine miles from the west end of Runway 22 and was totally destroyed. Kincheloe was 30 years-old. 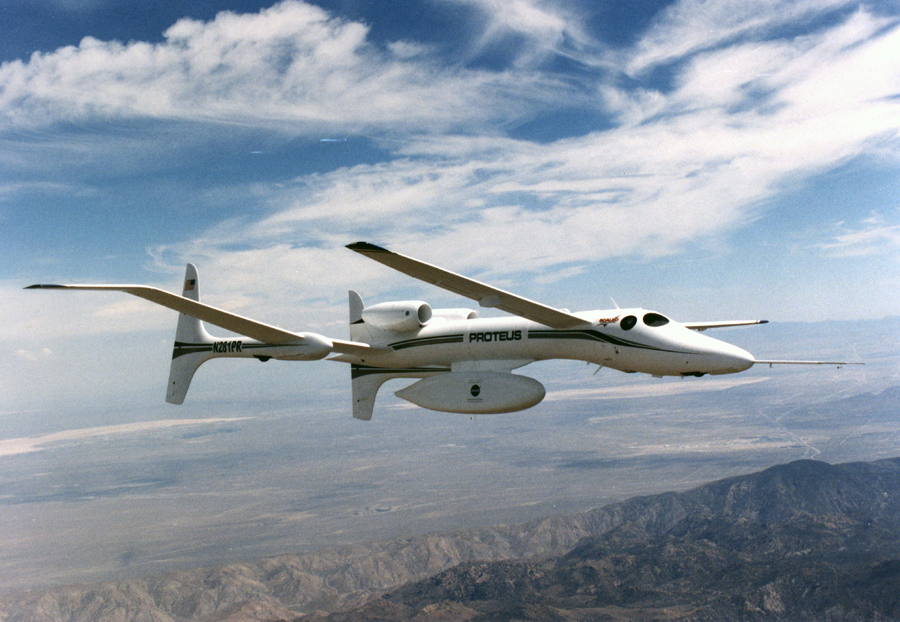 July 26, 1998: The Burt Rutan designed, Scaled Composites Proteus aircraft made its first flight at the Mojave Air and Space Port. Proteus is a twin-turbofan, high-altitude, multi-mission aircraft powered by Williams International FJ44-2E engines. It is designed to carry payloads in the 2,000-pound class to altitudes above 50,000 feet and remain on station up to 14 hours. Heavier payloads can be carried for shorter missions. It is intended for both piloted and UAV missions. Missions for Proteus include telecommunications, reconnaissance, atmospheric research, commercial imaging and space launch. The Proteus is designed with long wings and low-wing loading needed for efficient high altitude loiter. It excels in stability and low noise.

Proteus was conceived as an “optionally piloted” aircraft flown by a two-person crew for takeoff, climb to mission altitude, descent and landing, and then operated either by a single pilot, remotely from the ground, or autonomously when on station at mission altitude.

To that end, NASA’s Dryden (now Armstrong) Flight Research Center, under the Environmental Research Aircraft and Sensor Technology project, assisted Scaled Composites in development of a sophisticated station-keeping autopilot system that gave the Proteus a fully functional autonomous capability when on station. In addition, the ERAST project helped fund a satellite communications-based uplink/downlink data system for aircraft and payload data. The SATCOM system has full over-the-horizon capability, allowing the aircraft to be controlled remotely from a distant ground-based control station via the SATCOM uplink/downlink. 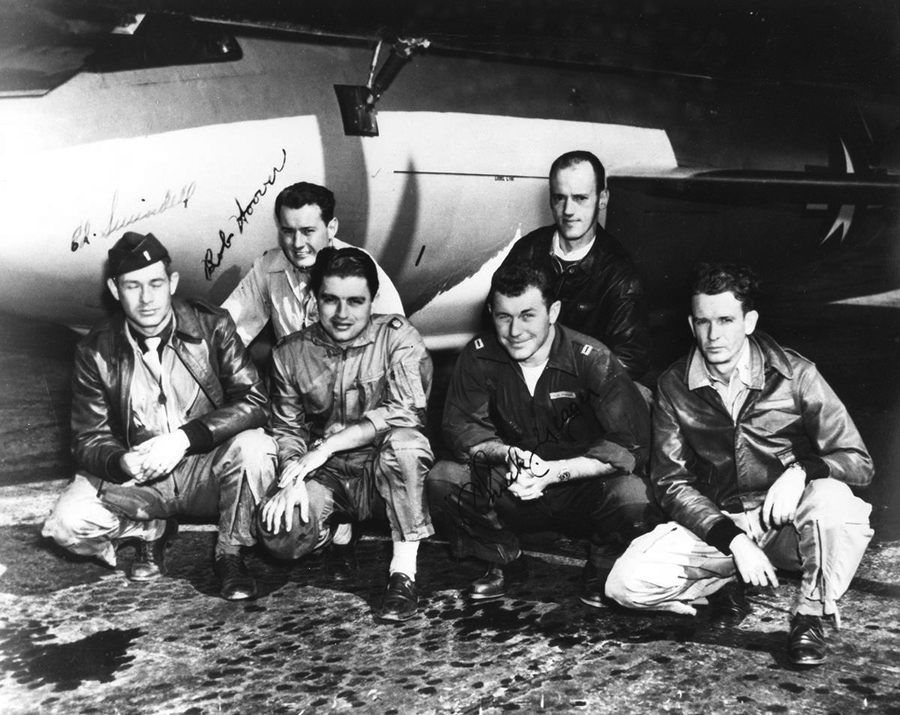 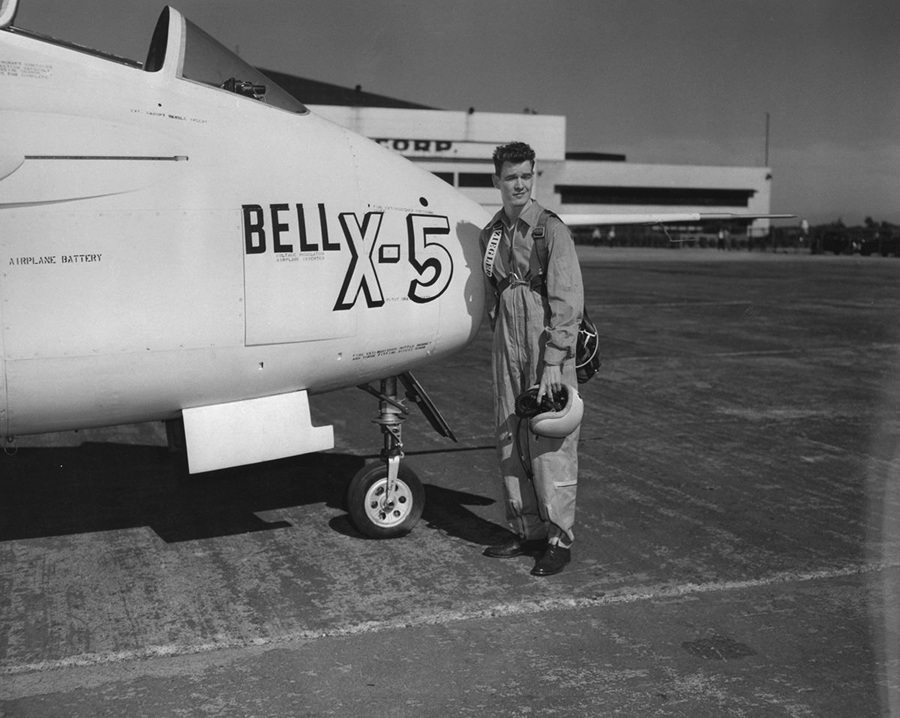 July 27, 1951: With company test pilot Jean “Skip” Ziegler at the controls, the Bell X-5 became the first variable-geometry aircraft in history to “swing” — or sweep forward or back — its wings while in flight. 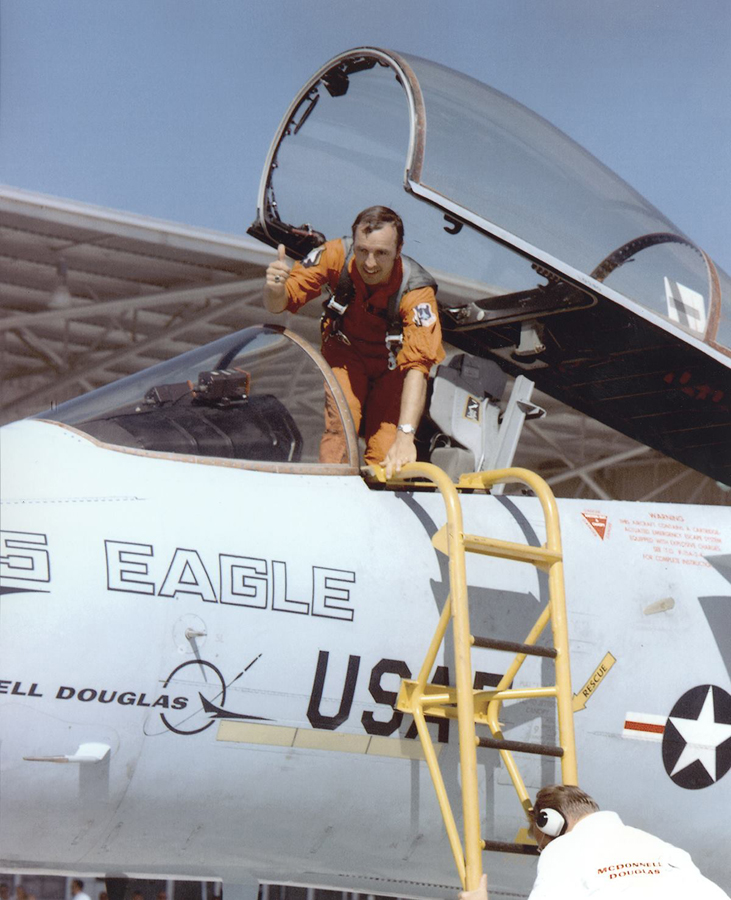 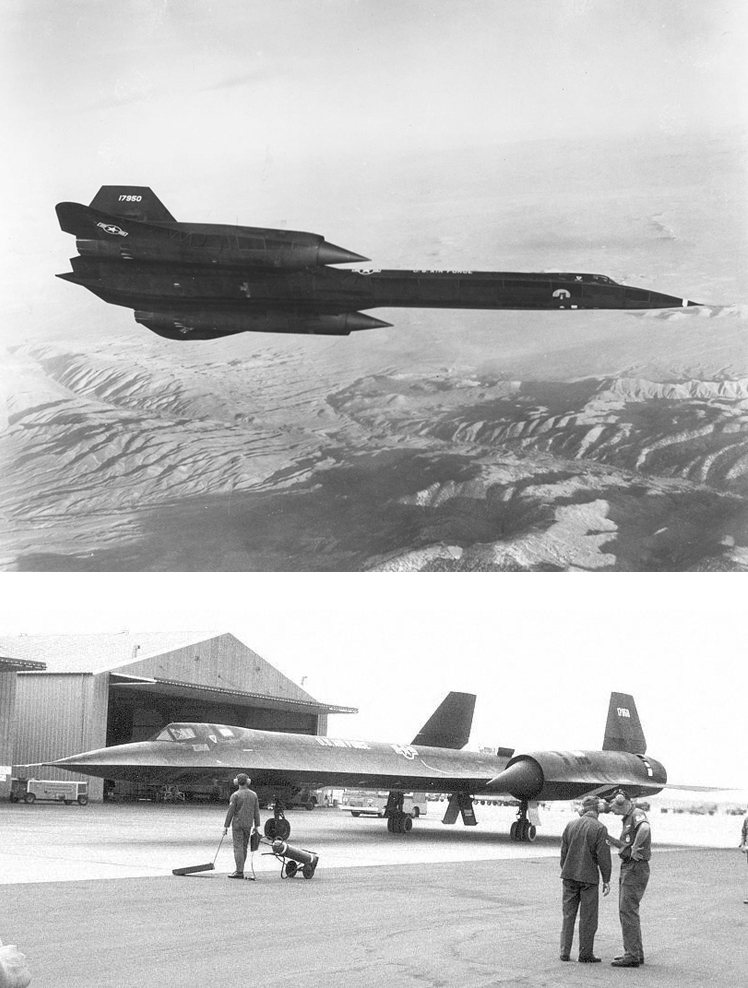 July 28, 1935: At Boeing Field, Seattle, Chief Test Pilot Leslie Ralph “Les” Tower and Louis Waite took off on the maiden flight of the Boeing Model 299, NX13372, a prototype four-engine, long range heavy bomber. For approximately one-and-a-half hours, Tower flew back and forth between Tacoma and Fort Lewis. When he landed, he said, “It handles just like a little ship — a little bigger, of course.” The Boeing Model 299 was a four-engine bomber operated by a crew of eight. It was designed to meet a U.S. Army Air Corps proposal for a multi-engine bomber that could carry a 2,000 pound bomb load a distance of 2,000 miles at a speed greater than 200 miles per hour. Design of the prototype began in June 1934 and construction was started Aug. 16, 1934. The Air Corps designated it B-299, and later, XB-17. It did not carry a military serial number, being marked with civil registration NX13372. 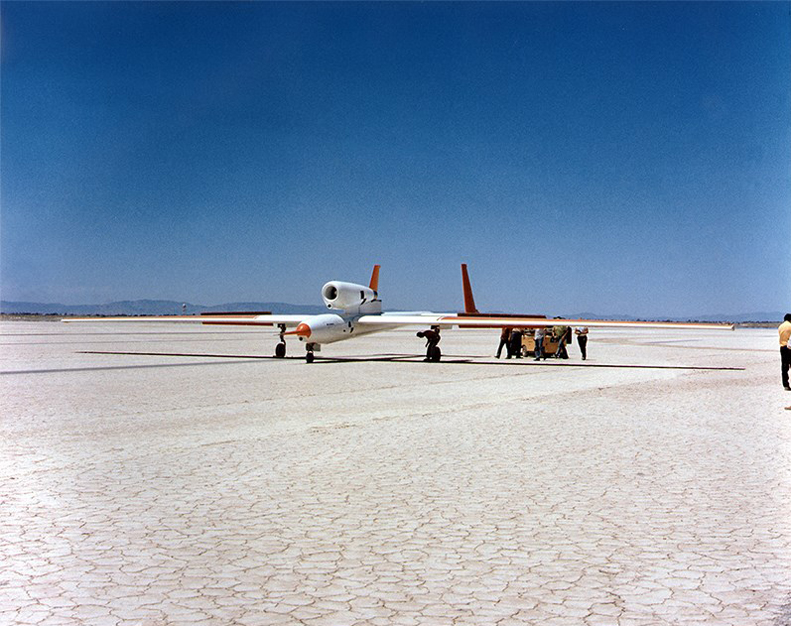 July 28, 1973: Boeing’s YQM-94A Compass Cope B-Gull remotely piloted vehicle made its first fight. This was a twin-tailed unmanned vehicle with a single jet engine mounted on a dorsal pod. 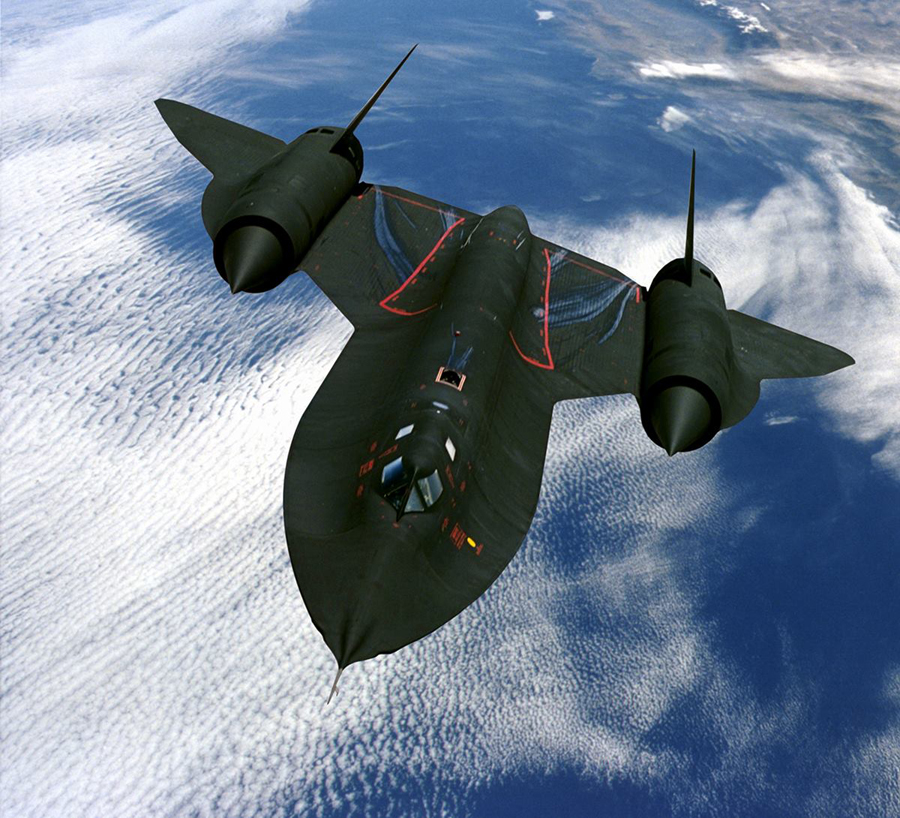 July 28, 1976: Capt. Eldon W. Joersz and Maj. George T. Morgan flew an SR-71 at 2,193.64 mph to set two records: world absolute and jet speed over a 15/25 kilometer straight course. Also, on this day – Capt. Robert C. Helt and Maj. Lang A. Elliot flew their SR-71 over the test range at Edwards Air Force Base, Calif., to a height of 85,069 feet, establishing both world absolute and jet records for altitude in horizontal flight. 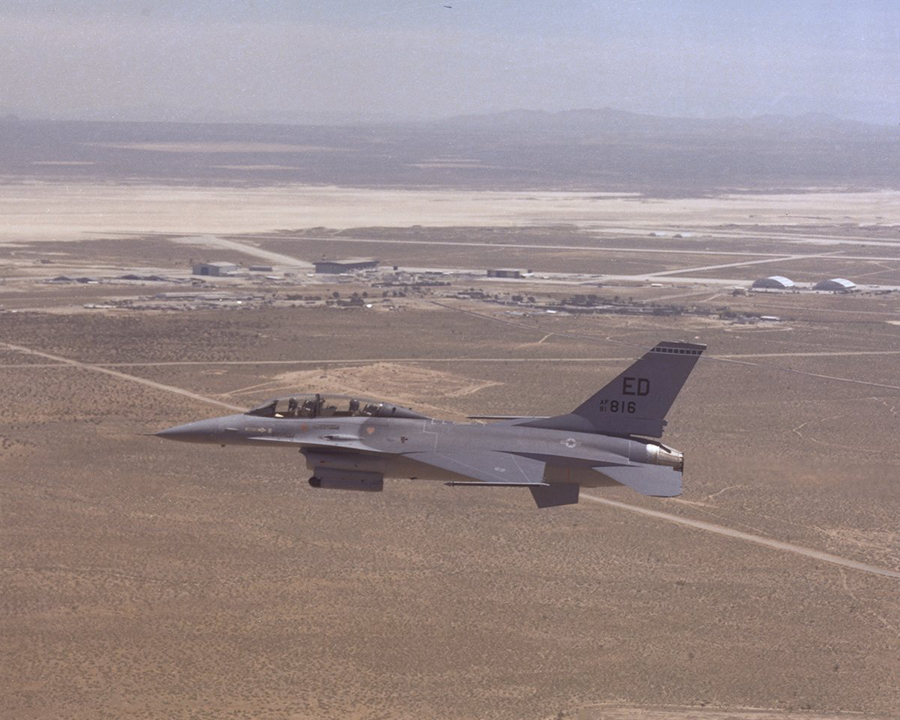 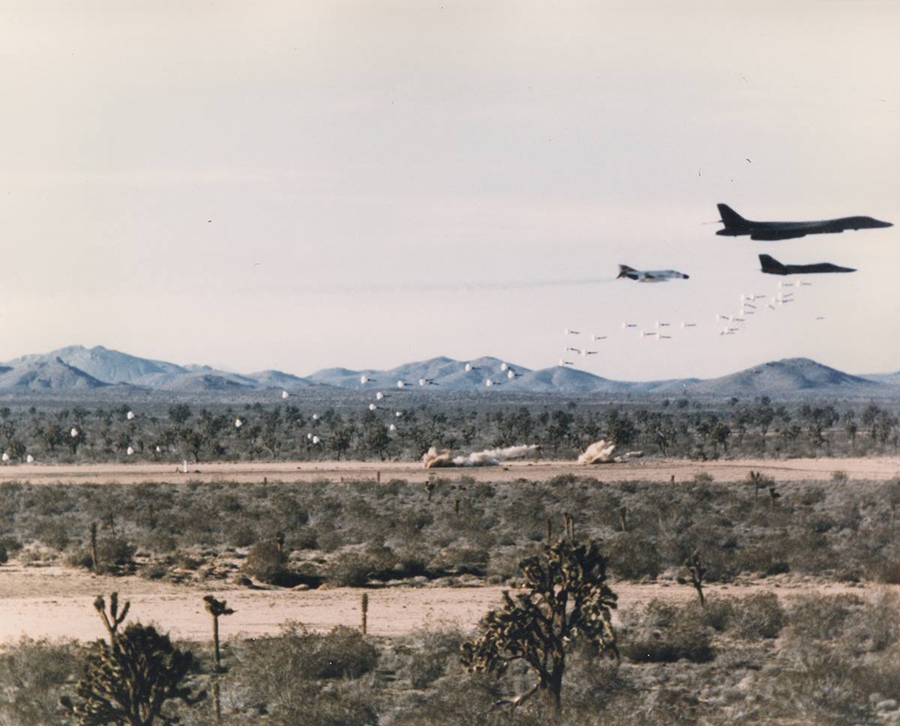 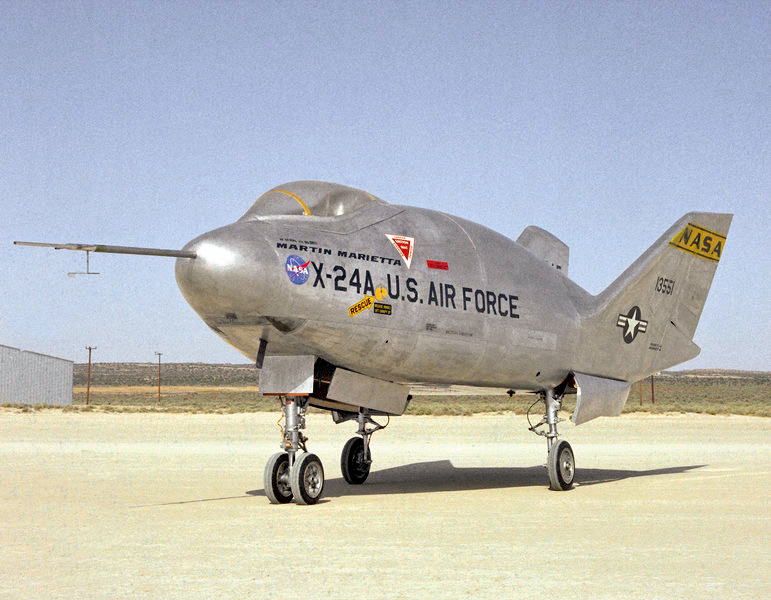 July 29, 1971: The Martin Marietta X-24A lifting body completed its flight test program. It was then converted to a different shape with the X-24B designation. The X-24 was one of a group of lifting bodies flown by the National Aeronautics Space Administration Flight Research Center, in a joint program with the U.S. Air Force at Edwards Air Force Base in California from 1963 to 1975. The lifting bodies were used to demonstrate the ability of pilots to maneuver and safely land wingless vehicles, designed to fly back to Earth from space and be landed like an airplane at a predetermined site.  Lifting bodies’ aerodynamic lift, essential to flight in the atmosphere, was obtained from their shape. The addition of fins and control surfaces allowed the pilots to stabilize and control the vehicles and regulate their flight paths.  The X-24 was built by Martin Marietta and flown from Edwards AFB, Calif. The X-24A was the fourth lifting body design to fly; it followed the NASA M2-F1 in 1964, the Northrop HL-10, the Northrop M2-F2 in 1966 and preceded the Northrop M2-F3.

The X-24A was a fat, short teardrop shape with vertical fins for control. It made its first, unpowered, glide flight on April 17, 1969. with Air Force Maj. Jerauld R. Gentry at the controls. Gentry also piloted its first powered flight on March 19, 1970. The craft was taken to around 45,000 feet (13.7 km) by a modified B-52 and then drop launched, then either glided down or used its rocket engine to ascend to higher altitudes before gliding down. The X-24A was flown 28 times at speeds up to 1,036 mph (1,667 km/h) and altitudes up to 71,400 feet (21.8 km).  The X-24B’s design evolved from a family of potential reentry shapes, each with higher lift-to-drag ratios, proposed by the Air Force Flight Dynamics Laboratory. To reduce the costs of constructing a research vehicle, the Air Force returned the X-24A to the Martin Marietta Corporation (as Martin Aircraft Company became after a merger) for modifications that converted its bulbous shape into one resembling a “flying flatiron” — rounded top, flat bottom, and a double delta platform that ended in a pointed nose.  First to fly the X-24B was John Manke, with a glide flight on Aug. 1, 1973. He was also the pilot on the first powered mission Nov. 15, 1973. 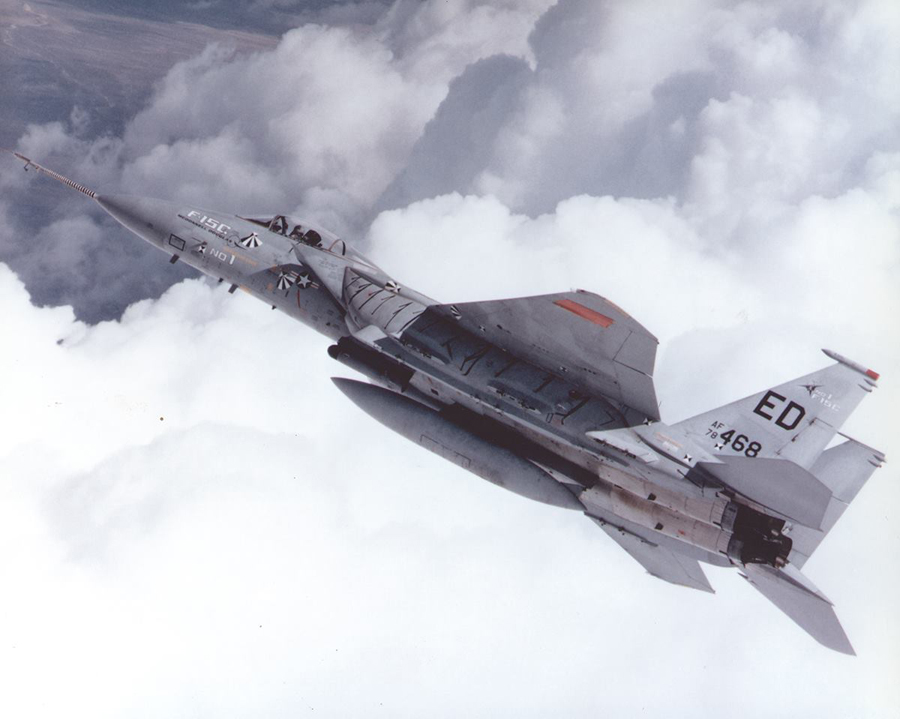 July 29, 1983: The F-15 Combined Test Force at Edwards Air Force Base, Calif., passed 10,000 hours of accident-free flight time. This was the first time in the history of U.S. fighter development that such a milestone had been reached.