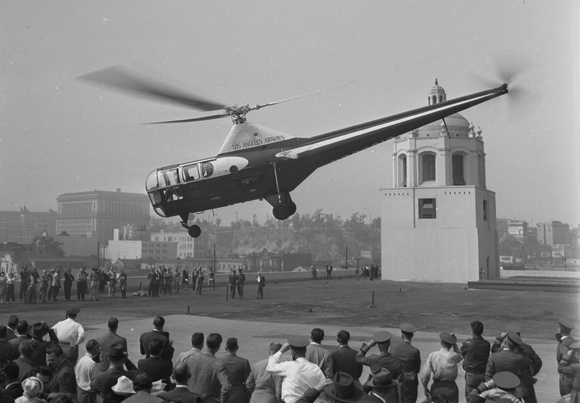 Oct. 1, 1947: A Los Angeles Airways helicopter takes off from the roof of Terminal Annex Post Office, inaugurating the first helicopter air mail service, the first of its kind in the United States. Two flights daily were planned on this run. 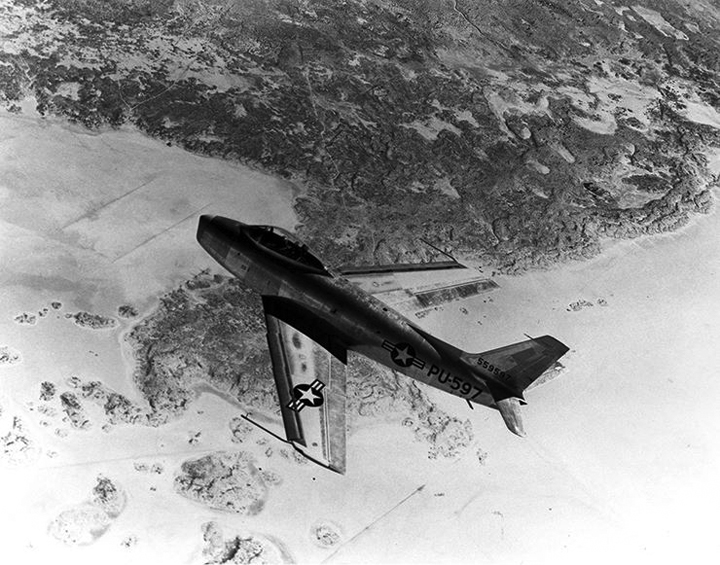 Oct. 1, 1947: North American’s XP-86 made its first flight, flown by North American test pilot George “Wheaties” Welch. The single-engine fighter was the nation’s first swept-wing combat airplane. The design of the XP-86, later to become famous as the F-86 Sabre, was derived from the company’s pudgy, straight-winged FJ-1 Fury fighter for the U.S. Navy.

Completed at North American’s Inglewood, Calif., plant on Aug. 8,1947, the aircraft was trucked to Muroc in mid-September. It was reassembled, everything was checked out, and after a few taxi tests, Welch took off for a initial familiarization flight. The duration of the first flight was one hour, 18 minutes.

During this first flight, George Welch climbed to 35,000 feet. 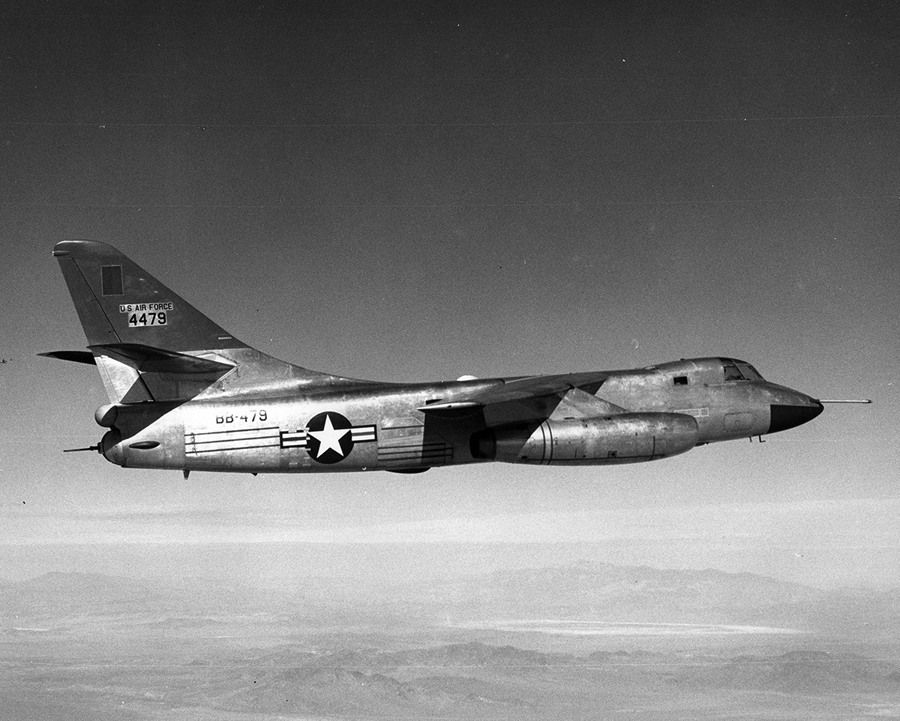 Oct. 1, 1957: The first flight was flown in a series of Low Altitude Bombing System (LABS) suitability tests for the Douglas B-66B. The purpose was to evaluate the suitability of the twin engine light bomber to the high stresses involved in the toss-bomb maneuver. 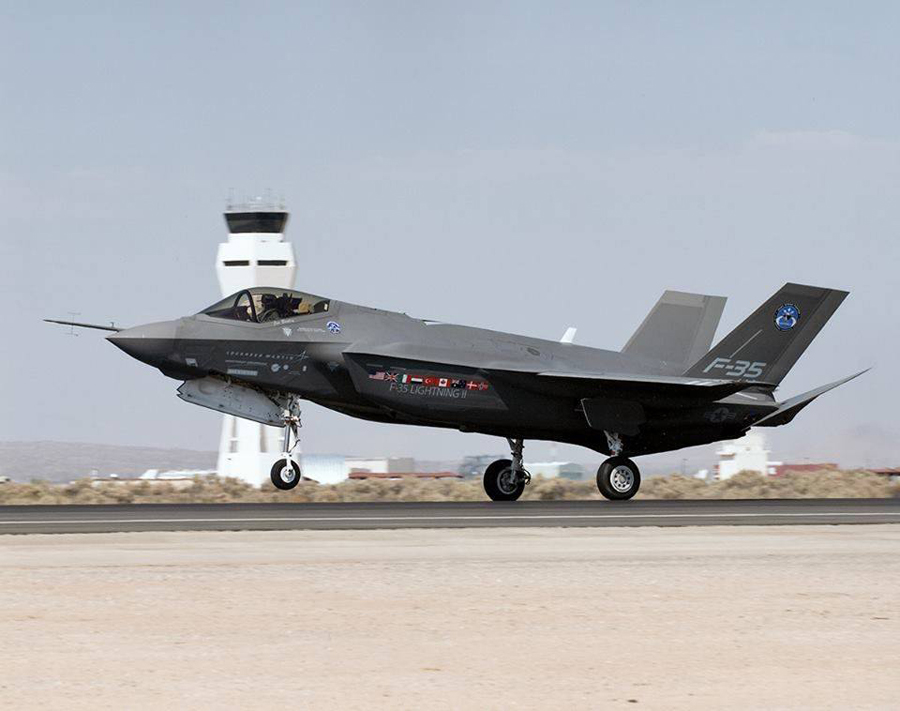 Oct. 1, 2008: The first F-35 test aircraft, AA-1, arrived at Edwards Air Force Base, Calif., following the model’s first cross-country flight from the Lockheed Martin Aeronautics production facility in Fort Worth, Texas. The aircraft was scheduled to remain several weeks at Edwards to conduct flight tests, before returning to Texas. 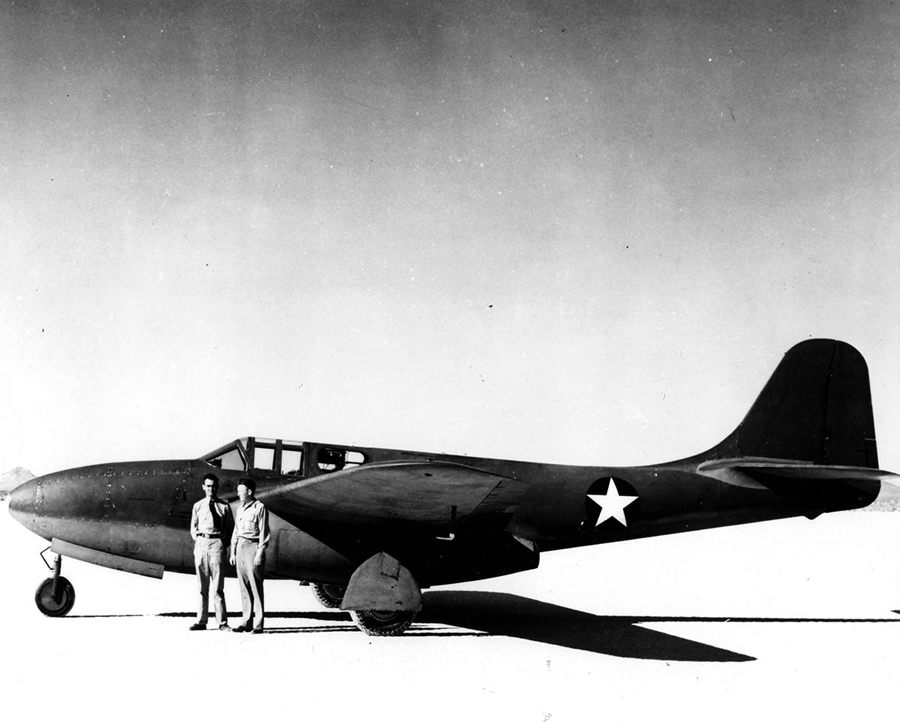 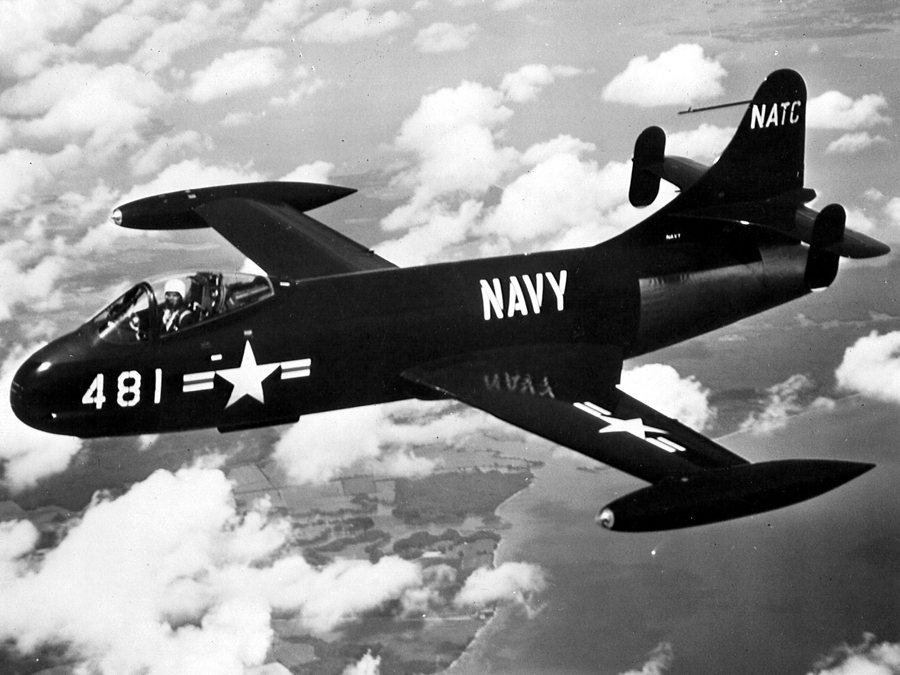 Oct. 2, 1946: The Vought F6U Pirate made its first flight. The Pirate was the Vought company’s first jet fighter, designed for the U.S. Navy during the mid-1940s. Although pioneering the use of turbojet power as the first naval fighter with an afterburner and composite material construction, the aircraft proved to be underpowered and was judged unsuitable for combat. None were ever issued to operational squadrons, and they were relegated to development, training, and test roles before they were withdrawn from service in 1950. 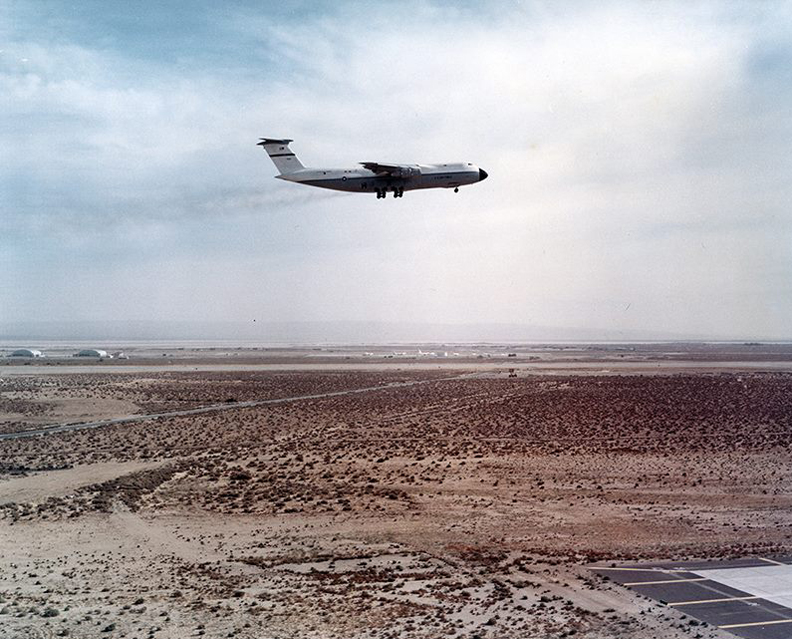 Oct. 2, 1969: The first C-5A Galaxy arrived at Edwards Air Force Base, Calif., for Category II testing. The Galaxy is a large military transport aircraft designed and built by Lockheed, and now maintained and upgraded by its successor, Lockheed Martin. It provides the U.S. Air Force with a heavy intercontinental-range strategic airlift capability, one that can carry outsized and oversized loads, including all air-certifiable cargo. The Galaxy has many similarities to the smaller Lockheed C-141 Starlifter and the later Boeing C-17 Globemaster III.

The C-5 is among the largest military aircraft in the world. The C-5 Galaxy’s development was complicated, including significant cost overruns, and Lockheed suffered significant financial difficulties. Shortly after entering service, cracks in the wings of many aircraft were discovered and the C-5 fleet was restricted in capability until corrective work was completed.

The C-5M Super Galaxy is an upgraded version with new engines and modernized avionics designed to extend its service life beyond 2040. The Air Force has operated the C-5 since 1969. In that time, the airlifter supported U.S. military operations in all major conflicts including Vietnam, Iraq, Yugoslavia, and Afghanistan, as well as allied support, such as Israel during the Yom Kippur War and operations in the Gulf War. The Galaxy has also distributed humanitarian aid, provided disaster relief, and supported the U.S. space program.

Oct. 2, 1981: The B-1 program is restarted, as President Ronald Reagan announces an order of 100 B-1Bs for the U.S. Air Force. The B-1 was first envisioned in the 1960s as a platform that would combine the Mach 2 speed of the B-58 Hustler with the range and payload of the B-52 and was meant to ultimately replace both bombers. After a long series of studies, Rockwell International (now part of Boeing) won the design contest for what emerged as the B-1A.

This version had a top speed of Mach 2.2 at high altitude and the capability of flying for long distances at Mach 0.85 at very low altitudes. The combination of the high cost of the aircraft, the introduction of the AGM-86 cruise missile that flew the same basic speed and distance, and early work on the stealth bomber all significantly reduced the need for the B-1. This led to the program being canceled in 1977, after the B-1A prototypes had been built. The program was restarted in 1981, largely as an interim measure due to delays in the B-2 stealth bomber program. This led to a redesign as the B-1B, which differed from the B-1A by having a lower top speed of Mach 1.25 at high altitude but improved the low-altitude speed to Mach 0.96. The electronics were also extensively improved, and the airframe was improved to allow takeoff with the maximum possible fuel and weapons load. Deliveries of the B-1B began in 1986 and formally entered service with Strategic Air Command (SAC) as a nuclear bomber that same year. By 1988, all 100 aircraft had been delivered. In this photograph, the first production B-1B aircraft, tail number 82-0001, is parked outside a hangar at the Rockwell International facility in Palmdale, Calif. 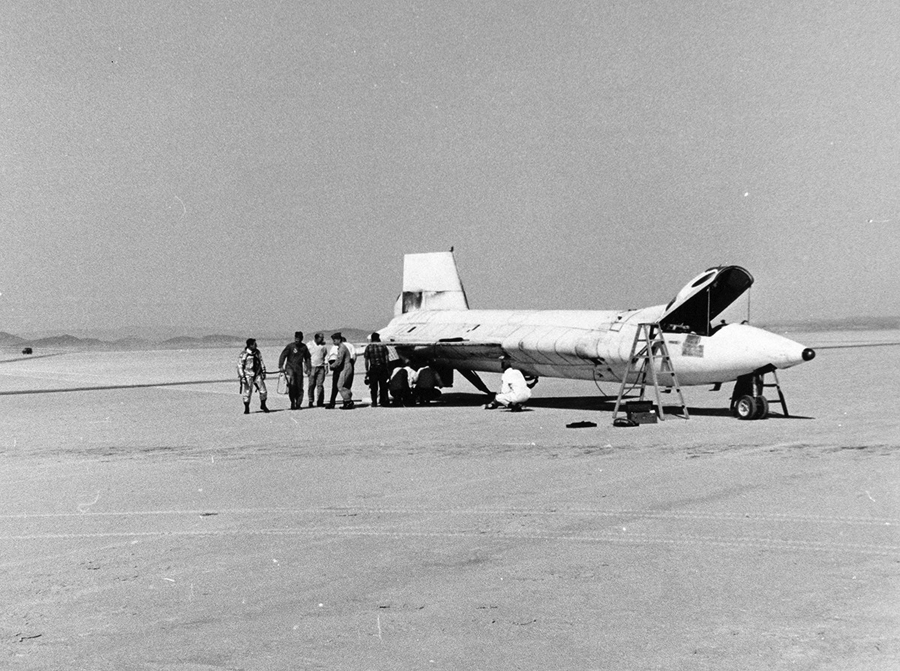 Oct. 3, 1967: Maj. William J. “Pete” Knight flew the modified X-15A-2 to a speed of Mach 6.7 (4,520 mph). The aircraft was flown with its full ablative coating and external fuel tanks. A dummy ramjet mounted on the lower ventral stub stabilizer fell away during the flight because of severe heat damage to the fairing. The flight marked the highest speed achieved in the X-15 program and remains the highest speed ever reached by a manned airplane.

Ablative armor is armor which prevents damage through the process of ablation, the removal of material from the surface of an object by vaporization, chipping, or other erosive processes. In contemporary spacecraft, ablative plating is most frequently seen as an ablative heat shield for a vehicle that must enter atmosphere from orbit, such as on nuclear warheads, or space vehicles like the Mars Pathfinder probe.

The idea is also commonly encountered in science fiction. In aviation, a drop tank (external tank, wing tank, or belly tank) is used to describe auxiliary fuel tanks externally carried by aircraft. A drop tank is expendable and often able to be jettisoned. External tanks are commonplace on modern military aircraft and occasionally found in civilian ones, although the latter are less likely to be discarded except in the event of emergency. 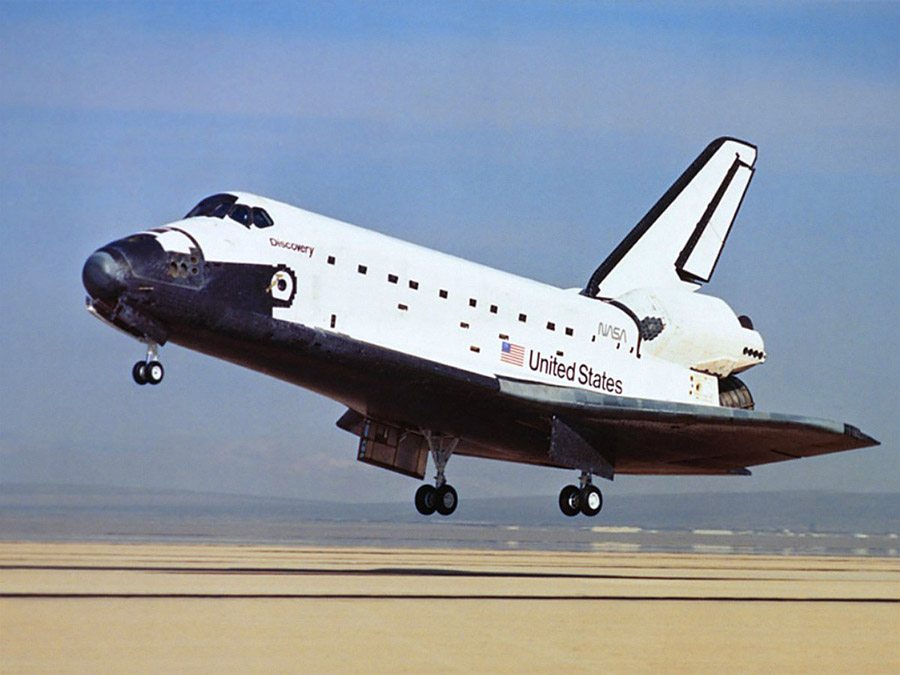 Oct. 3, 1988: The space shuttle Discovery landed safely at Edwards Air Force Base, Calif., after its four-day mission (STS-26). It was the first American shuttle mission since the Challenger disaster. 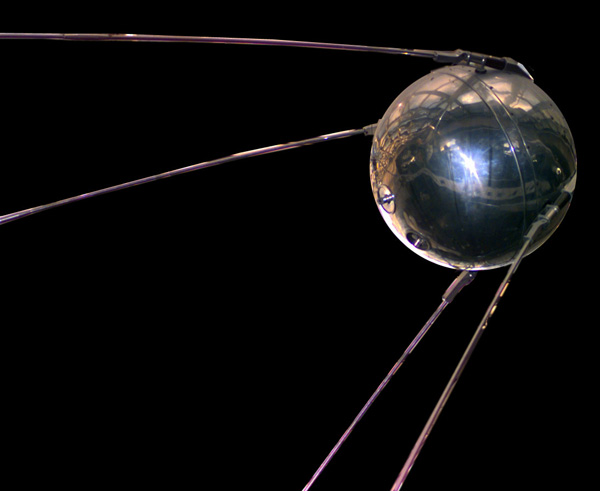 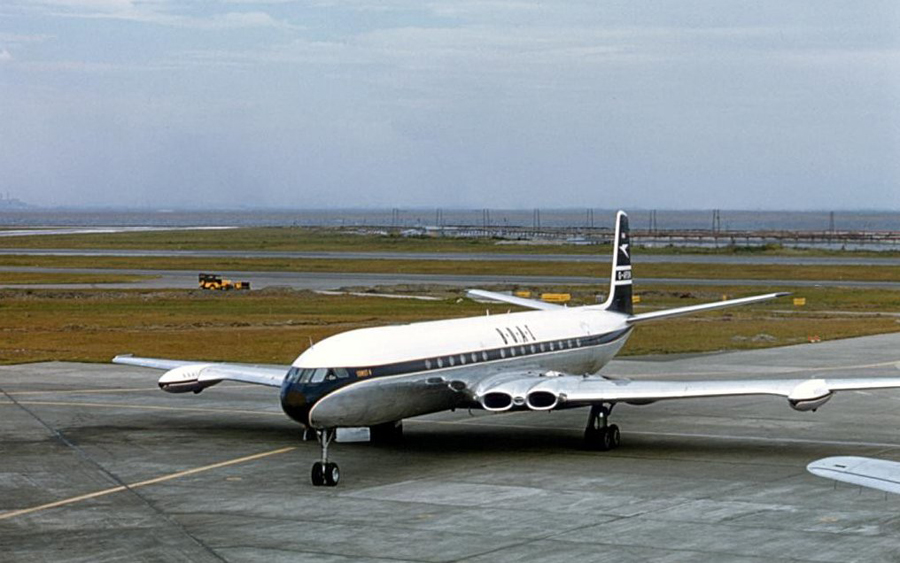 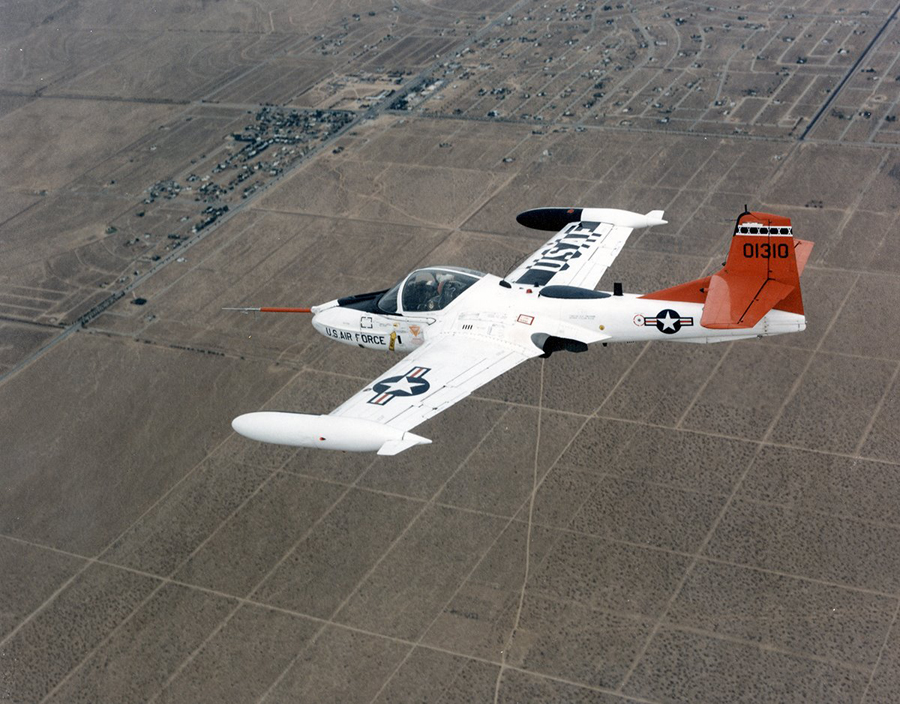 Oct. 4, 1968: Category II Performance and Stability and Control evaluations began on the A-37B light attack aircraft at Edwards Air Force Base, Calif. The Cessna A-37 Dragonfly, or Super Tweet, is an American light attack aircraft developed from the T-37 Tweet basic trainer in the 1960s and 1970s by Cessna of Wichita, Kansas. The A-37 was introduced during the Vietnam War and remained in peacetime service afterward. 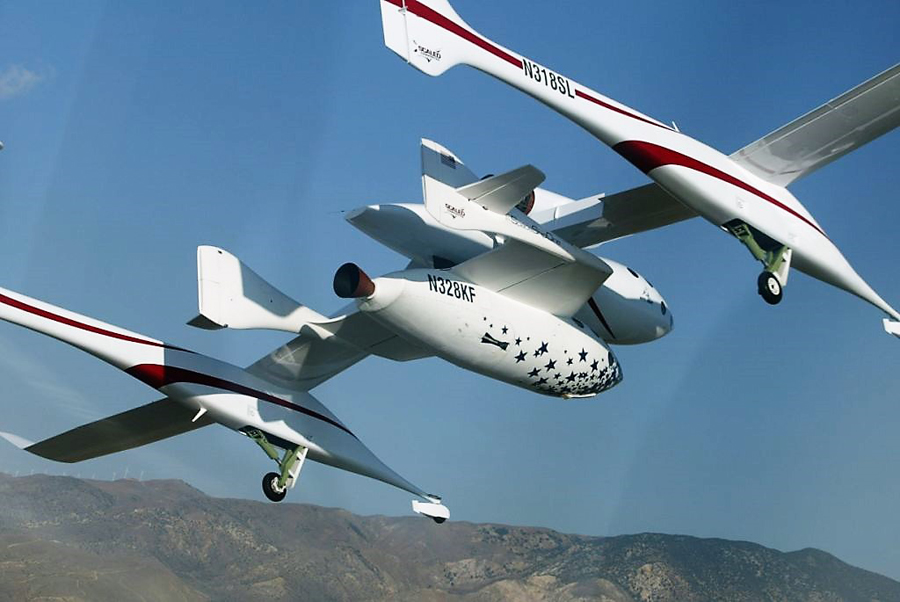 Oct. 4, 2004: SpaceShipOne made its second successful spaceflight in five days from the Mojave Air and Space Port, in California’s High Desert, to win the Ansari X Prize. With Brian Binnie at the helm, the spacecraft reached Mach 3.09, and flew for 23 minutes and 56 seconds. SpaceShipOne reached orbit after being launched from a mother ship, “White Knight.” Both craft were developed and flown by Mojave Aerospace Ventures, which was a joint venture between Paul Allen and Scaled Composites, Burt Rutan’s aviation company. During its test program, SpaceShipOne set many important “firsts,” including first privately funded aircraft to exceed Mach 2 and Mach 3, first privately funded crewed spacecraft to exceed 100km altitude, and first privately funded reusable crewed spacecraft. The Ansari X Prize was a space competition in which the X Prize Foundation offered a $10 million prize for the first non-government organization to launch a reusable crewed spacecraft into space twice within two weeks. It was modeled after early 20th-century aviation prizes and aimed to spur development of low-cost spaceflight. SpaceShipOne’s official model designation is Scaled Composites Model 316. In this Scaled Composites photograph, SpaceShipOne sits below the mothership, White Knight, as it flies above Southern California.

Oct. 5, 1954: The second prototype XF-104 Starfighter, with Tony LeVier at the controls, made its first flight at Edwards Air Force Base, Calif. This was the armament test aircraft and was equipped with a General Electric T171 Vulcan 20mm Gatling gun. This six-barreled gun was capable of firing at a rate of 6,000 rounds per minute.

The aircraft was lost April 19, 1955, when it suffered explosive decompression at 47,000 feet during a test of the T171 Vulcan gun system. The lower escape hatch had come loose due to an inadequate latching mechanism. Lockheed test pilot Herman “Fish” Salmon was unable to find a suitable landing area and ejected at 288 mph, and 15,000 feet. The XF-104 crashed 72 miles east-northeast of Edwards Air Force Base. Salmon was found two hours later, uninjured, about 2 miles (3.2 kilometers) from the crash site. 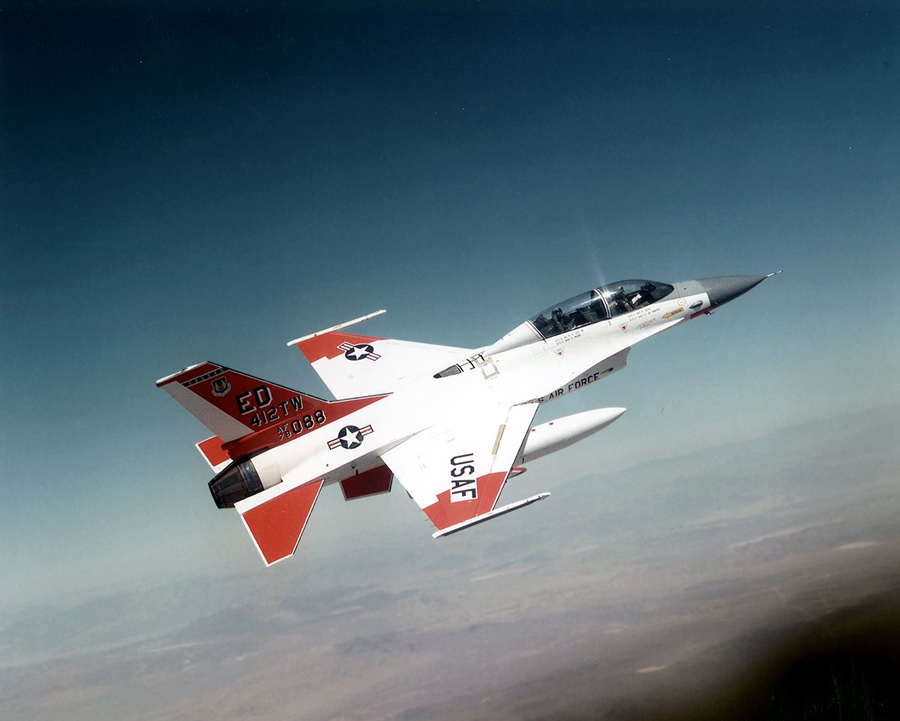 Oct. 5, 2001: F-16B, flown by the USAF Test Pilot School, surpassed 6,000 flying hours. Lockheed Martin Aeronautics Company announced that this was the highest number of flying hours accumulated by any F-16. 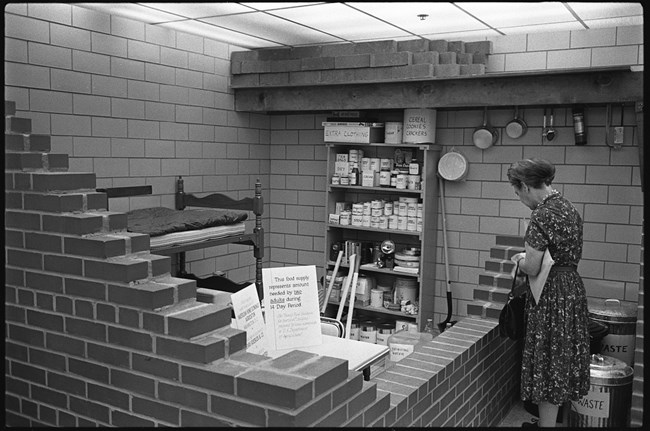 Oct. 6, 1961: President John F. Kennedy, speaking on civil defense, advises American families to build bomb shelters to protect them from atomic fallout in the event of a nuclear exchange with the Soviet Union. Kennedy also assured the public that the U.S. civil defense program would soon begin providing such protection for every American. Only one year later, true to Kennedy’s fears, the world hovered on the brink of full-scale nuclear war when the Cuban Missile Crisis erupted over the USSR’s placement of nuclear missiles in Cuba. During the tense 13-day crisis, some Americans prepared for nuclear war by buying up canned goods and completing last-minute work on their backyard bomb shelters. 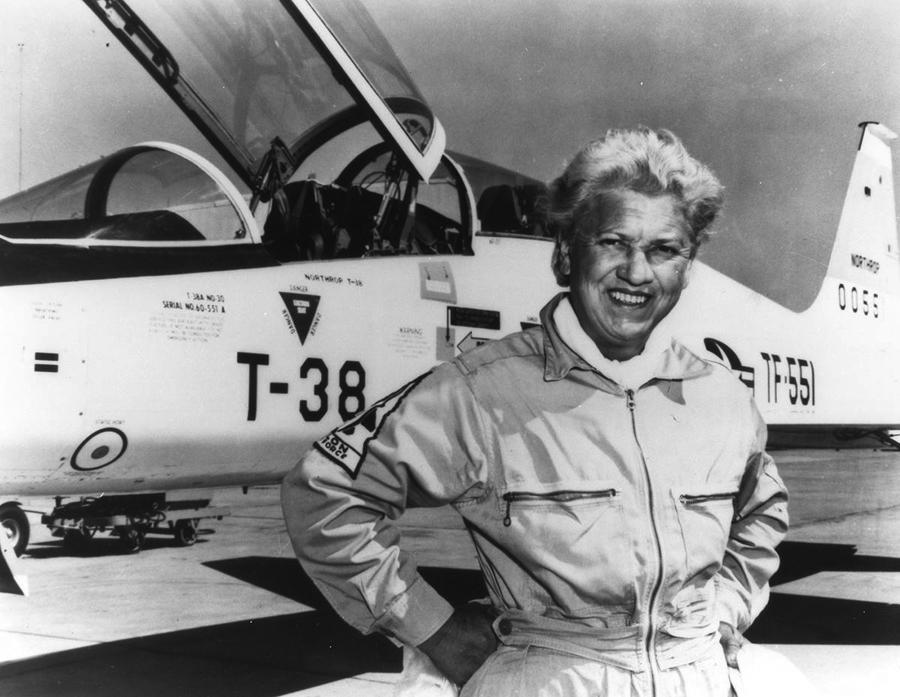 Oct. 6, 1966: A Boeing EC-135N high altitude communications relay station aircraft arrived at Edwards Air Force Base, Calif., for evaluation. The aircraft, modified with a 10-foot-long radome on its nose, was the first of eight planned Apollo Range Instrumented Aircraft (ARIA) to be used as a flying worldwide communications network for the Apollo program. 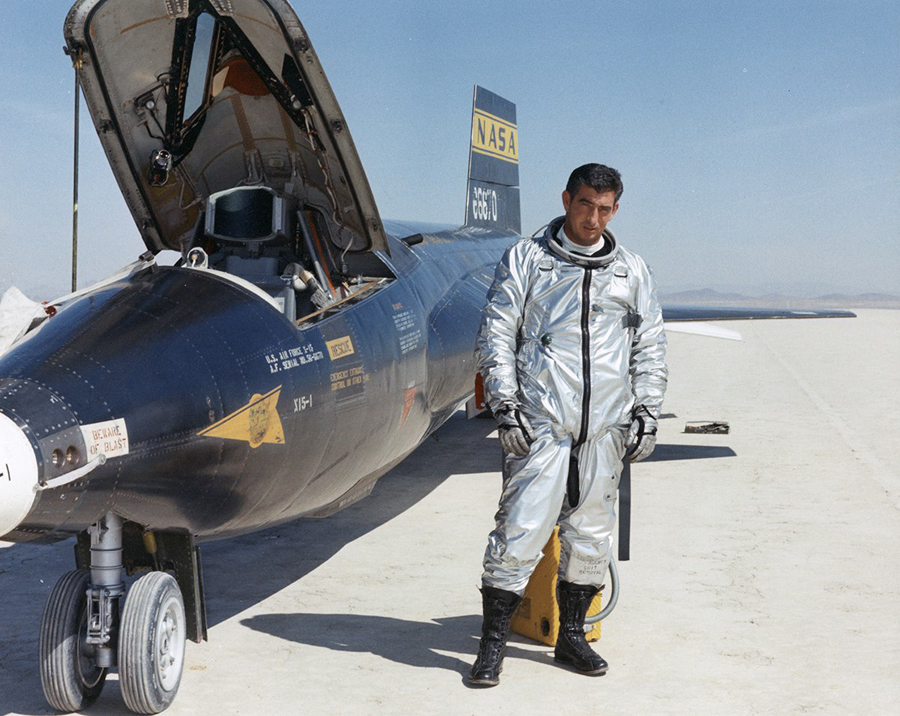 Oct. 6, 1966: The XLR-99 engine of X-15 No. 1 shut down 90 seconds after launch due to a bulkhead failure. Major Michael J. Adams, making his first X-15 flight, made a successful emergency landing on Cuddeback Dry Lake in the Mojave Desert. 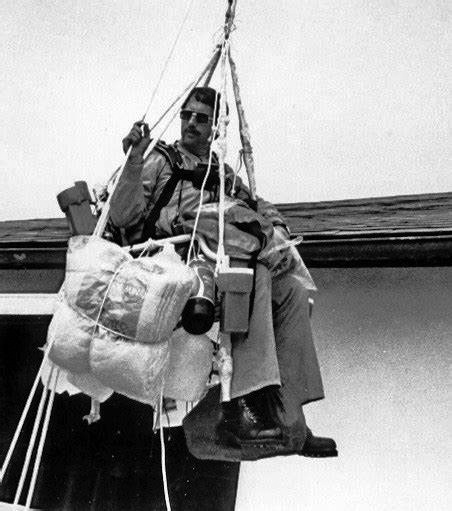 Oct. 6, 1993: Larry Walters, aka “Larry the Lawn Chair Pilot,” dies age 44. He took flight on July 2, 1982, in a homemade aircraft constructed out of a patio chair and 45 helium-filled weather balloons. He reached an altitude of 16,000 feet and floated from San Pedro, Calif., into federal airspace near Long Beach airport. 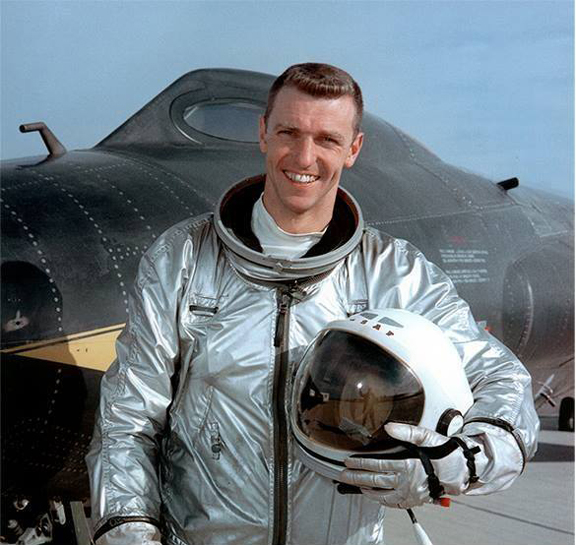 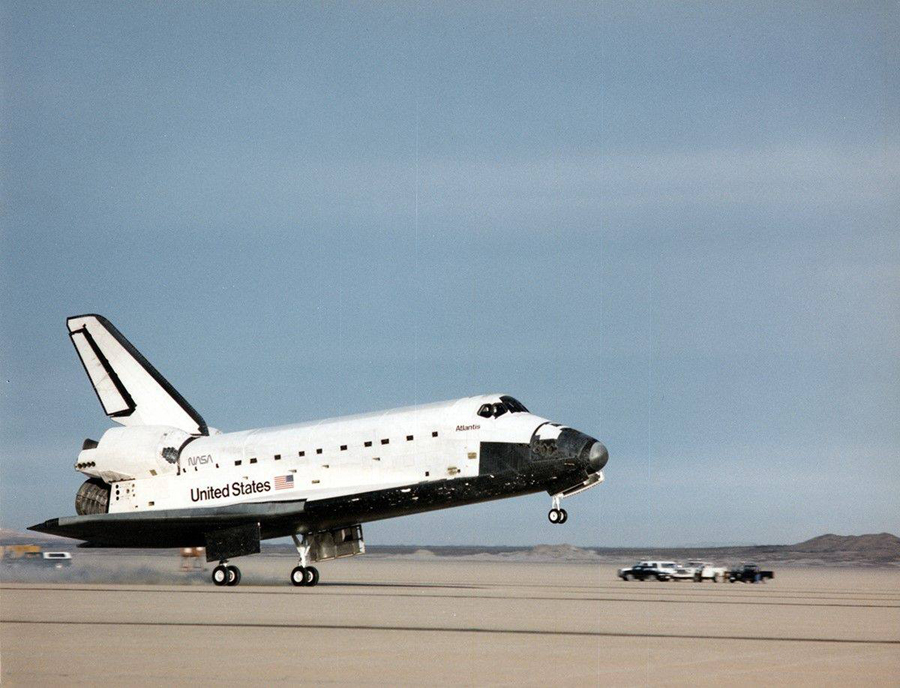 Oct. 7, 1985: Space Shuttle Atlantis landed on lakebed Runway 23 at Edwards Air Force Base, following its first orbital mission. Atlantis lifted off on its maiden voyage on Oct. 3, 1985, on mission STS-51-J, the second dedicated Department of Defense flight. It flew one other mission, STS-61-B, the second night launch in the shuttle program, before the Space Shuttle Challenger disaster temporarily grounded the Shuttle fleet in 1986. Among the five Space Shuttles flown into space, Atlantis conducted a subsequent mission in the shortest time after the previous mission (turnaround time) when it launched in November 1985 on STS-61-B, only 50 days after its previous mission, STS-51-J in October 1985. Atlantis was built by Rockwell International at its Palmdale, Calif., facility. During its lifetime, it underwent two schedule overhauls, first in 1992, and second in 1997, both in Palmdale.

Oct. 7, 2001: A Tomahawk cruise missile is launched from the USS Philippine Sea in a strike against al Qaeda training camps and Taliban military installations in Afghanistan. The United States and the United Kingdom began airstrikes in Afghanistan in response to that state’s support of terrorism and Osama bin Laden. The act was the first military action taken in response to the terrorist attacks on the U.S. on Sept. 11, 2001.