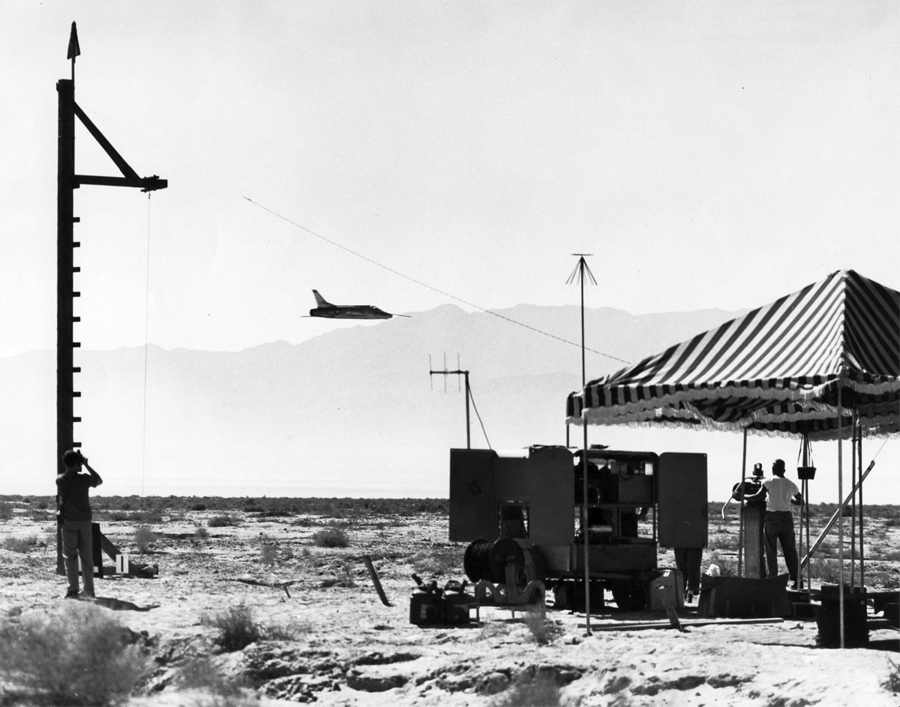 Oct. 29, 1953: Lt. Col. Frank “Pete” Everest flew a new prototype air superiority fighter, North American Aviation’s YF-100A Super Sabre over the three kilometer and 15 kilometer courses at the Salton Sea, in the Colorado Desert of southeastern California. Flying four runs over the short course, Everest averaged 757.75 mph. Although this was 4.80 mph faster than the FAI record set three weeks earlier by U.S. Navy Lt. Cmdr. James B. Verdin with a Douglas XA4D-1 Skyray, it was not fast enough to establish a new world record under FAI rules, which required that a new record exceed the previous record by one percent. 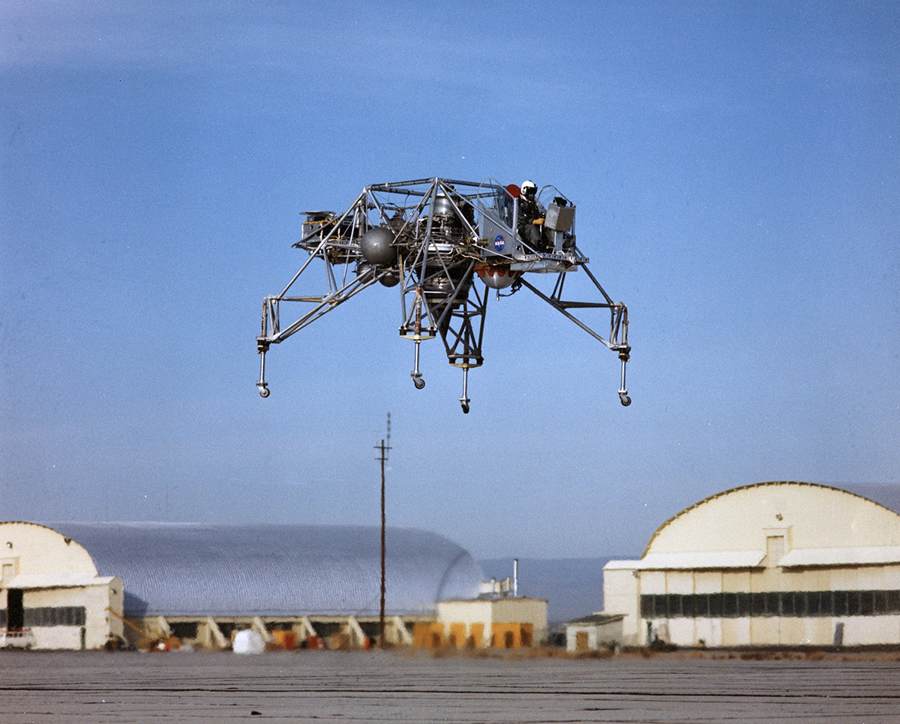 Oct. 30, 1964: Bell’s Lunar Landing Research Vehicle made its first flight, piloted by Joe Walker. The LLRV was developed by the NASA Flight Research Center to simulate a lunar landing profile for research and lunar pilot training for NASA’s Apollo program. Nicknamed the Flying Bedstead, two LLRVs were built. The research vehicles were vertical take-off vehicles that used a single jet engine mounted on a gimbal so that it always pointed vertically. It was adjusted to cancel 5/6 of the vehicle’s weight, and the vehicle used hydrogen peroxide rockets which could accurately simulate the behavior of a lunar lander. Success of the two LLRVs led to the building of three Lunar Landing Training Vehicles, an improved version of the LLRV, for use by Apollo astronauts at the Manned Spacecraft Center in Houston, Texas, predecessor of NASA’s Johnson Space Center. One LLRV and two LLTVs were destroyed in crashes, but the rocket ejection seat system safely recovered the pilot in all cases. 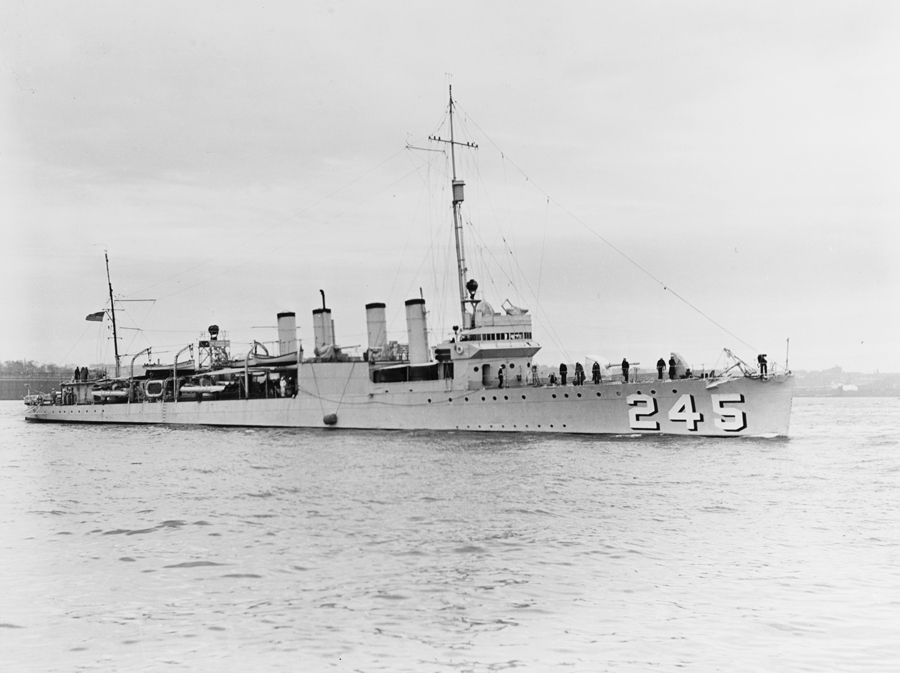 Oct. 31, 1941: The Navy destroyer USS Reuben James was torpedoed by a German U-boat off Iceland with the loss of some 100 lives, even though the United States had not yet entered World War II. 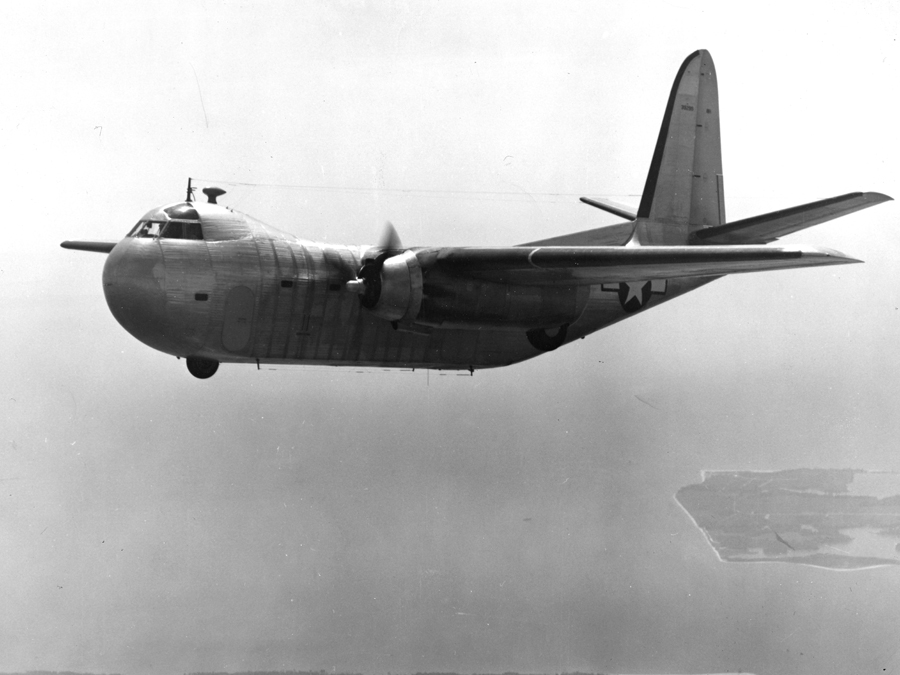 Oct. 31, 1943: The Budd RB Conestoga made its first flight in Philadelphia, Penn., piloted by Guy Miller. The RB-1 Conestoga was a twin-engine, stainless steel cargo aircraft designed for the U.S. States Navy during World War II by the Budd Company of Philadelphia. Although it did not see service in a combat theater, it pioneered design innovations in American cargo aircraft, later incorporated in modern military cargo airlifters. The initial order was for 200 aircraft that was later reduced to 17. The final aircraft was delivered in March 1944, and the fleet of Conestogas was retired from Navy service in early 1945. 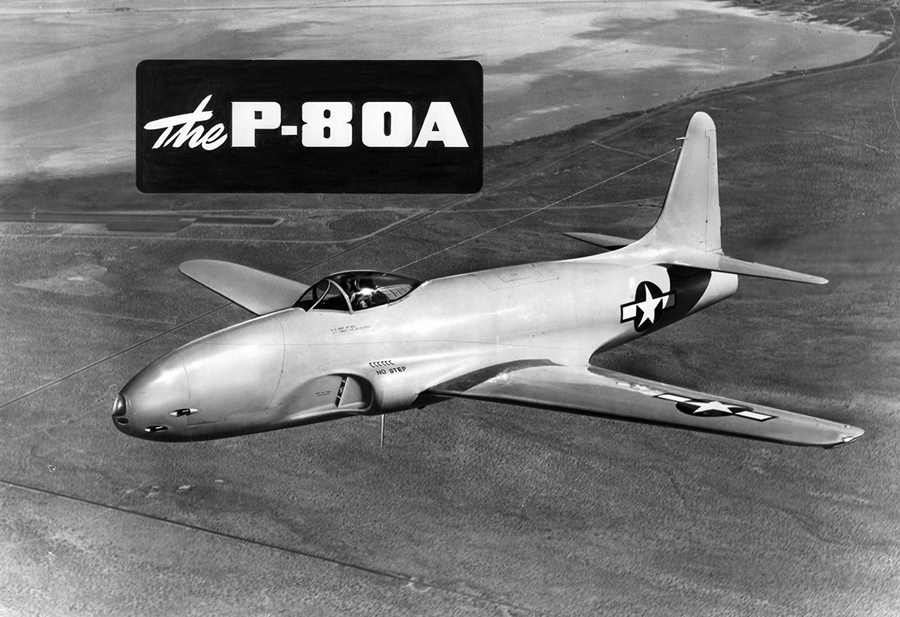 Oct. 31, 1945: Two P-80As Shooting Stars equipped with remote control equipment arrived at Muroc Army Air Field in Calif. for instrumentation. The jets were to be used in dive demonstrations. The Lockheed P-80 was the first jet fighter used operationally by the U.S. Army Air Forces. Designed and built by Lockheed in 1943 and delivered just 143 days from the start of the design process, production models were flying, and two pre-production models did see very limited service in Italy just before the end of World War II.

Designed with straight wings, the type saw extensive combat in Korea with the U.S Air Force as the F-80. America’s first successful turbojet-powered combat aircraft, it helped usher in the “jet age” in the Air Force but was outclassed with the appearance of the swept-wing transonic MiG-15 and was quickly replaced in the air superiority role by the transonic F-86 Sabre. The F-94 Starfire, an all-weather interceptor on the same airframe, also saw Korean War service. 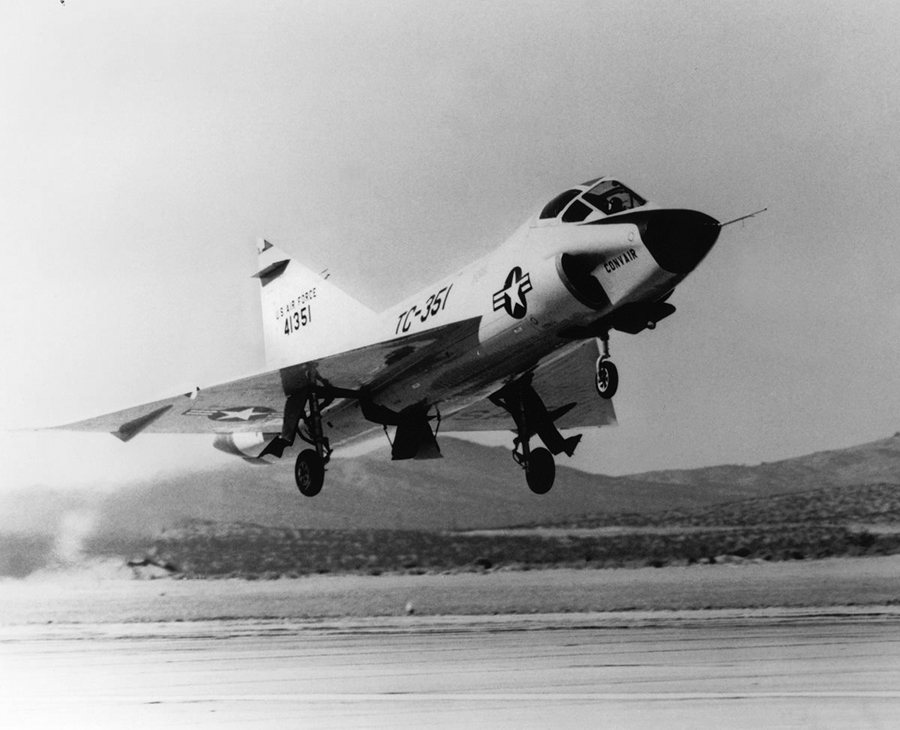 Oct. 31, 1955: The TF-102A made its first flight, piloted by Richard L. Johnson. The aircraft was a trainer version of the F-102 Delta Dagger, and featured side-by-side seating and relocated air intakes which gave the jet a very different appearance and inferior performance from the F-102A interceptor. 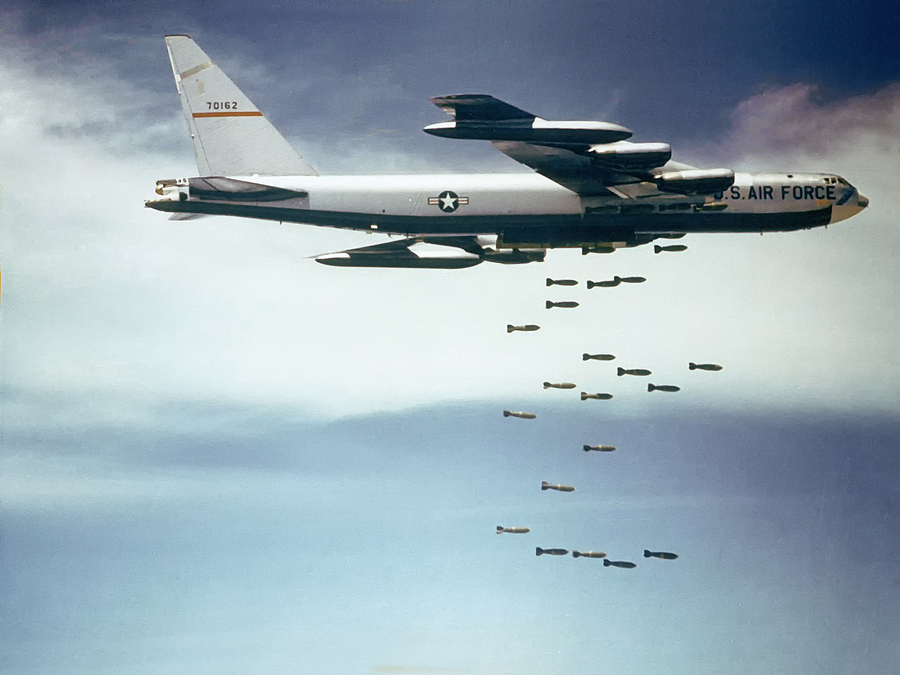 Oct. 31, 1968: President Lyndon B. Johnson ordered a halt to all U.S. bombing of North Vietnam, saying he hoped for fruitful peace negotiations. 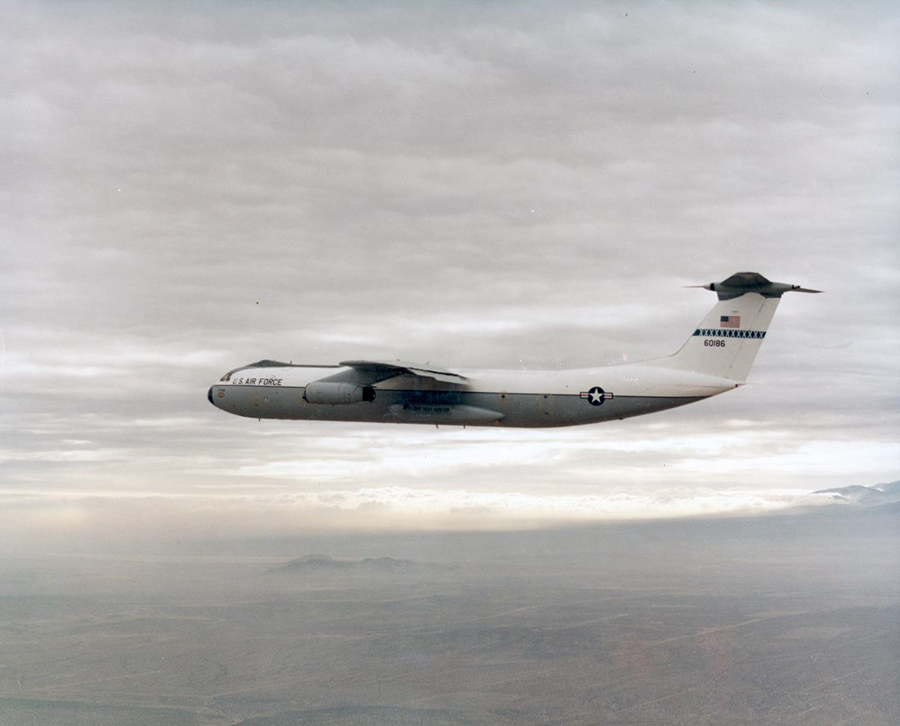 Oct. 31, 1980: A C-141B successfully completed the HAVE BOUNCE program. HAVE BOUNCE was an evaluation of the performance of different types of operational aircraft over rapidly repaired bomb-damaged runways.

Nov. 1, 1946: Ryan Aeronautical Corporation’s experimental XF2R Dark Shark made its first flight, piloted by Al Conover. The single XF2R was based on the FR Fireball composite fighter. The Dark Shark was an experimental aircraft built for the U.S. Navy that combined turboprop and turbojet propulsion. Although the Dark Shark proved to be a capable aircraft, it never got further than the prototype stage as all-jet aircraft were considered superior. 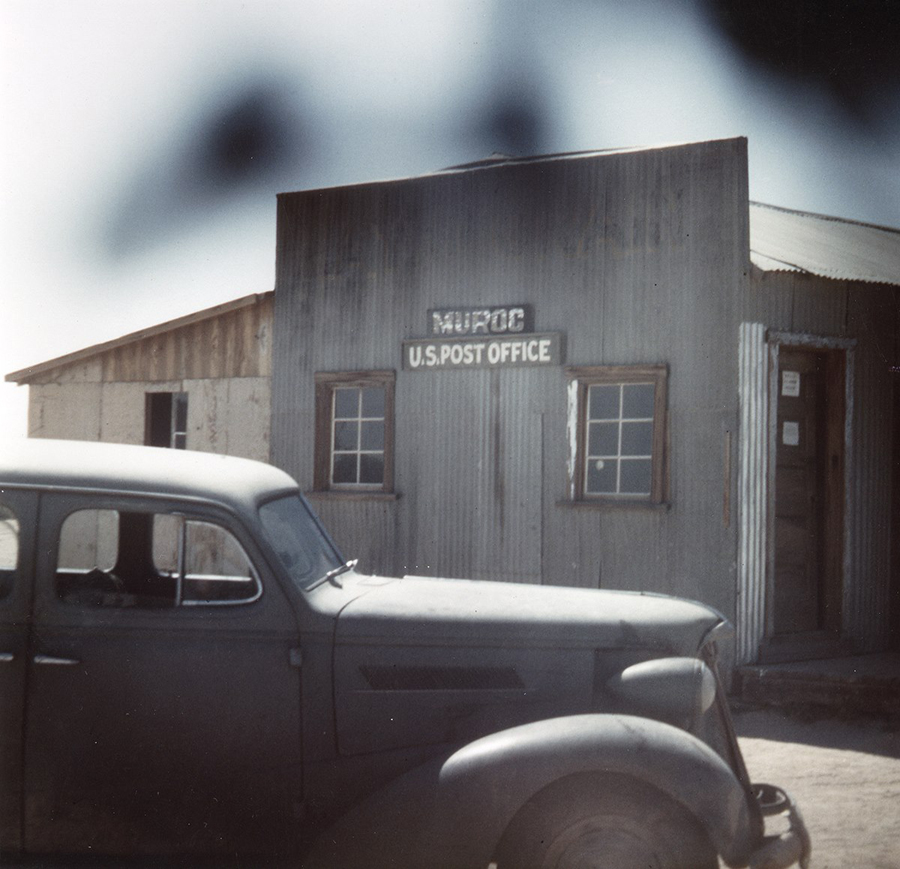 Nov. 1, 1951: The Muroc Post Office was officially renamed Edwards by the Postal Service, to make the post office name conform to that of the area it exclusively served. This History Office file photo shows the old Muroc Post Office during the 1940s. 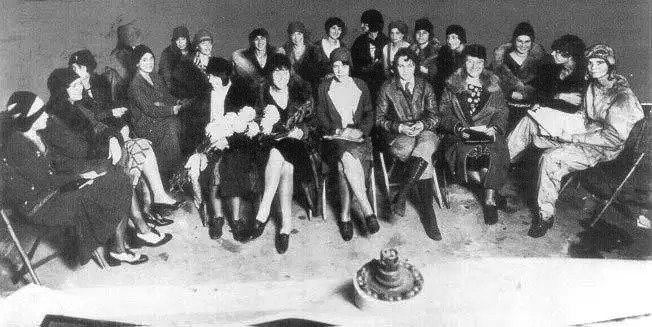 Amelia Earhart had called for a meeting of female pilots in 1929 following the Women’s Air Derby. All 117 women pilots licensed at the time were invited, and the group is named for the 99 of them who attended the meeting or expressed an interest in forming a group. In 2014, the Ninety-Nines were inducted into the International Air & Space Hall of Fame at the San Diego Air & Space Museum. Members of note include Jackie Cochran, Pancho Barnes, Flora Belle Reece, Eileen Collins and Pam Melroy. 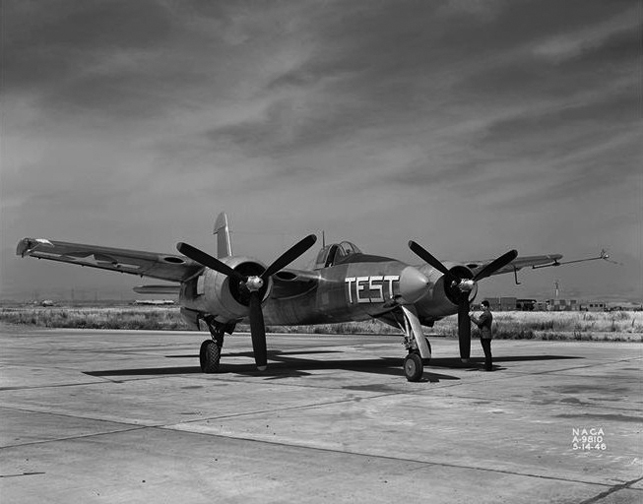 Nov. 2, 1943: The Grumman XF7F-1 Tigercat prototype made its first flight. The Tigercat was a heavy fighter aircraft that served with U.S. Navy and Marine Corps from late in World War II until 1954. It was the first twin-engine fighter to be deployed by the Navy. While the Tigercat was delivered too late to see combat in World War II, it saw action as a night fighter and attack aircraft during the Korean War.

Designed initially for service on Midway-class aircraft carriers, early production F7Fs were land-based variants. The type was too large to operate from older and smaller carriers, and only a late variant (F7F-4N) was certified for carrier service. Navy Capt. Fred Trapnell, one of the premier Navy test pilots of the era, stated: “It’s the best damn fighter I’ve ever flown.” This photograph shows the second XF7F-1 in 1946. 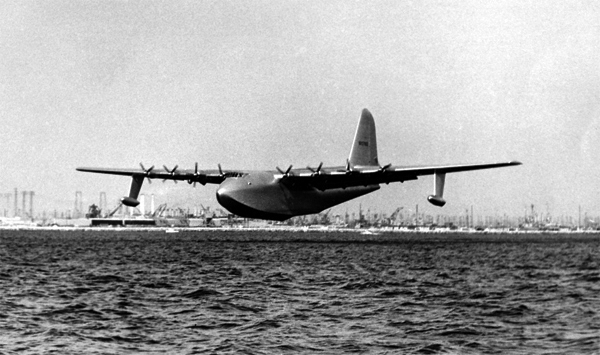 Nov. 2, 1947: With Howard Hughes at the controls, the Hughes H-4 Hercules, also known as the “Spruce Goose,” makes its first flight, traveling at 135 mph for about a mile at an altitude of 70 feet over Long Beach Harbor in California with 32 people on board. Both the largest flying boat and the aircraft with the largest wingspan (319 feet 11 inches) ever built, but never flew again. 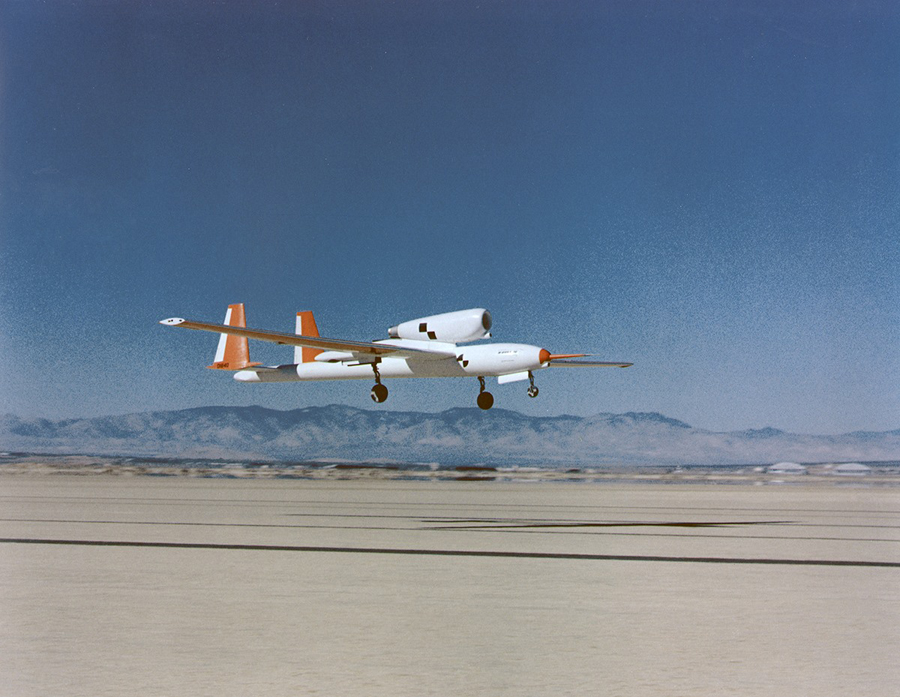 Nov. 2, 1974: Boeing’s second YQM-94A Cope B made its first flight. The Compass Cope program was a technology demonstration rather than a competitive flyoff. 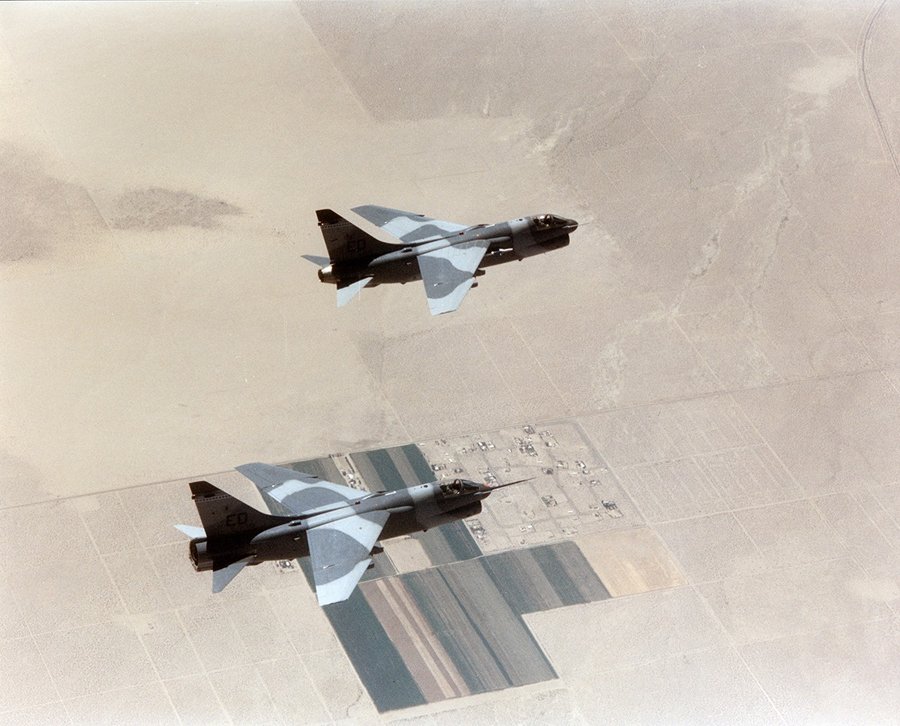 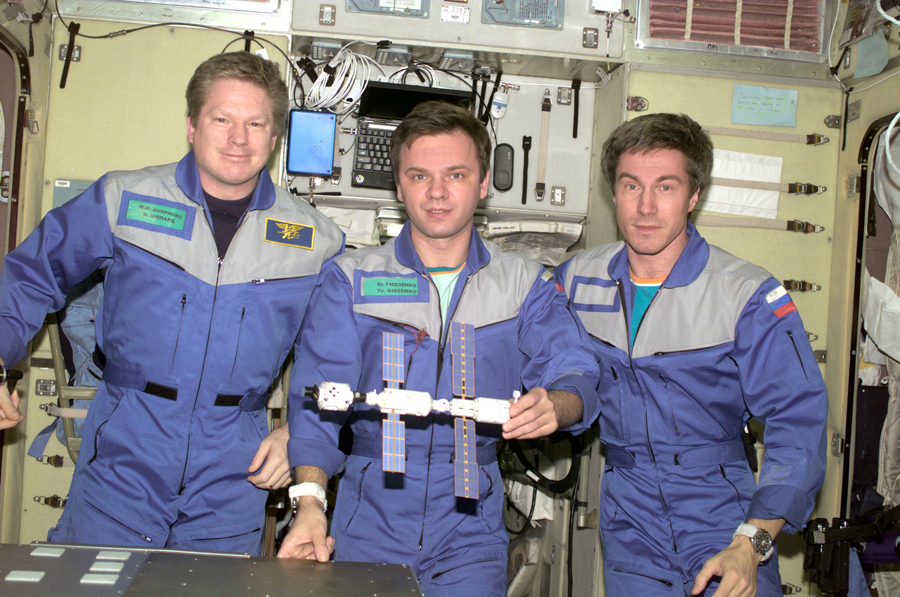 Nov. 2, 2000: The International Space Station welcomed its first long-term residents: NASA astronaut Bill Shepherd and two Russian cosmonauts, Yuri Gidzenko and Sergei Krikalev. The mission was called Expedition 1. Before this expedition, NASA had launched five, one-week-long Space Shuttle missions to help build the space station and bring up supplies. But this time, the crew would be staying for four and a half months, and they weren’t taking the shuttle. Instead, they took a Russian Soyuz spacecraft, and this was the first Soyuz to ever dock at the space station. During their stay at the space station, they unpacked supplies and installed new equipment, including the first solar arrays. They left on the space shuttle Discovery, which brought up the Expedition 2 crew that would take their place. 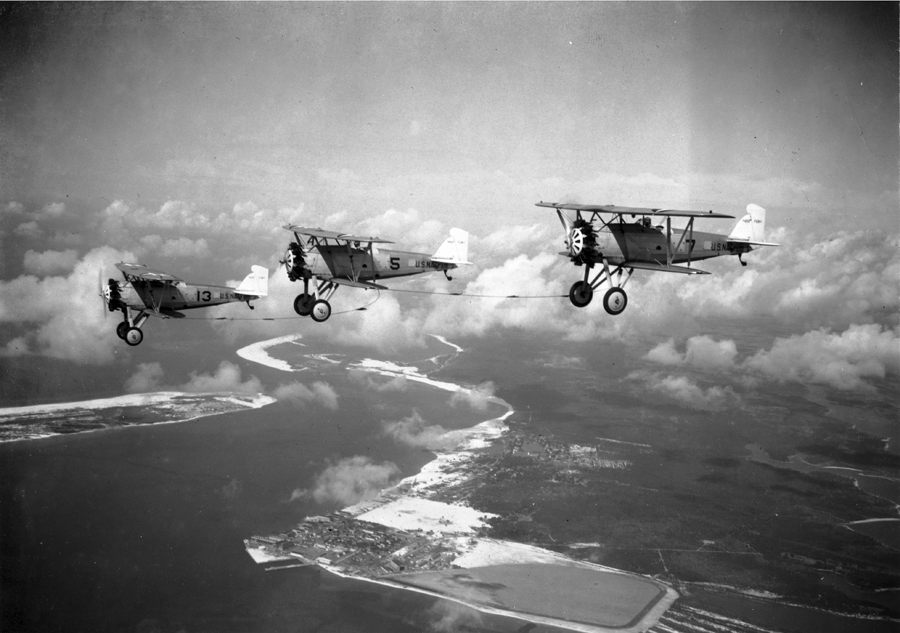 Nov. 3, 1926: The Boeing F2B makes its first flight. The F2B was a U.S. Navy biplane fighter aircraft in the 1920s, familiar to aviation enthusiasts of the era as the craft of the Three Sea Hawks aerobatic flying team, famous for its tied-together formation flying. Initially the Boeing Model 69, it was inspired by the results of tests on the FB-6, which was powered by a Pratt & Whitney R-1340B Wasp radial engine.

Boeing set out to use this engine in a fighter designed specifically for carrier operations, using the same welded-tubing fuselage and wooden-frame wings as for the Model 15, and adding a large spinner to reduce air drag around the engine (this was dropped in production). Armament was either two .30 in machine guns, or one .30 in and one .50 in (12.7 mm); the lower wing had attachments for up to four 25-pound bombs, plus a fifth could be hung from the fuselage.

Following first flight, the Navy acquired the prototype as XF2B-1, which could reach speeds of 154 mph, and was sufficiently impressed to order 32 F2B-1s. In addition to omission of the large, streamlined spinner cap, the production versions also had a balanced rudder.

Delivery began on January 20, 1928, with some assigned to fighter squadron VF-1B and others to bomber squadron VF-2B, both operating from the carrier Saratoga. Although the Navy did not order any more F2Bs, Boeing built two more, as Model 69Bs, exporting one to Brazil and the other to Japan. In 1927, Lt. D. W. “Tommy” Tomlinson, commanding officerO of VF-2B, created the first U.S. Naval aerobatic team.

Nov. 3, 1965: Maj. Robert A. Rushworth made the first flight of the modified X-15A-2 rocketplane, Air Force serial number 56-6671. After a landing accident which caused significant damage to the Number 2 X-15, it was rebuilt by North American Aviation. A 28-inch “plug” was installed in the fuselage forward of the wings to create space for a liquid hydrogen fuel tank which would be used for an experimental “scramjet” engine that would be mounted on the ventral fin. The modified aircraft was also able to carry two external fuel tanks.

It was hoped that additional propellant would allow the X-15A-2 to reach much higher speeds. The first flight with the new configuration was an “envelope expansion” flight, intended to test the handling characteristics of the X-15A-2, and to jettison the tanks (which were empty on this flight) to evaluate the separation and trajectory as they fell away from the rocketplane in supersonic flight.

The X-15A-2 was dropped from the Boeing NB-52A Stratofortress 52-003, over Cuddeback Lake, 37 miles northeast of Edwards Air Force Base, Calif. This was the only time during the 199-flight X-15 Program that this lake was used as a launch point. The X-15 was released at 09:09 a.m., PST. Rushworth ignited the Reaction Motors XLR99-RM-1 rocket engine and it ran for 84.1 seconds before its fuel supply was exhausted.

This engine was rated at 57,000 pounds of thrust. The X-15 climbed to 70,600 feet and reached Mach 2.31 (1,514 mph). The test flight went well. The external tanks jettisoned cleanly and fell away. The recovery parachute for the liquid oxygen tank did not deploy, however, and the tank was damaged beyond repair. Rushworth and the X-15A-2 touched down on Rogers Dry Lake after a flight of 5 minutes, 1.6 seconds. 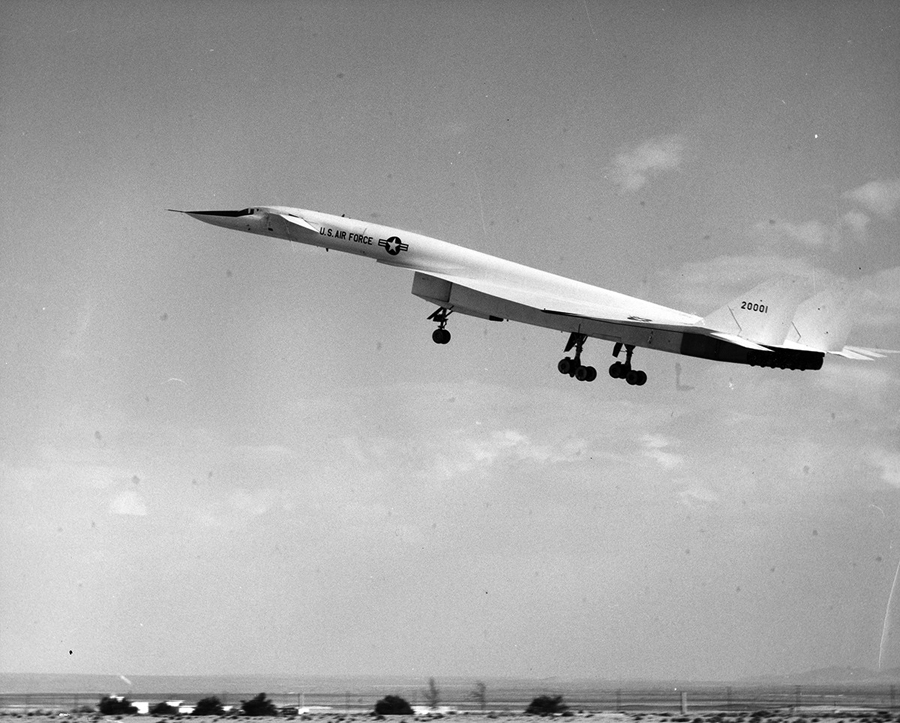 Nov. 3, 1966: Flights of the XB-70 Valkyrie resumed as aircraft No. 1 made the first of nine flights in support of the National Sonic Boom Program. 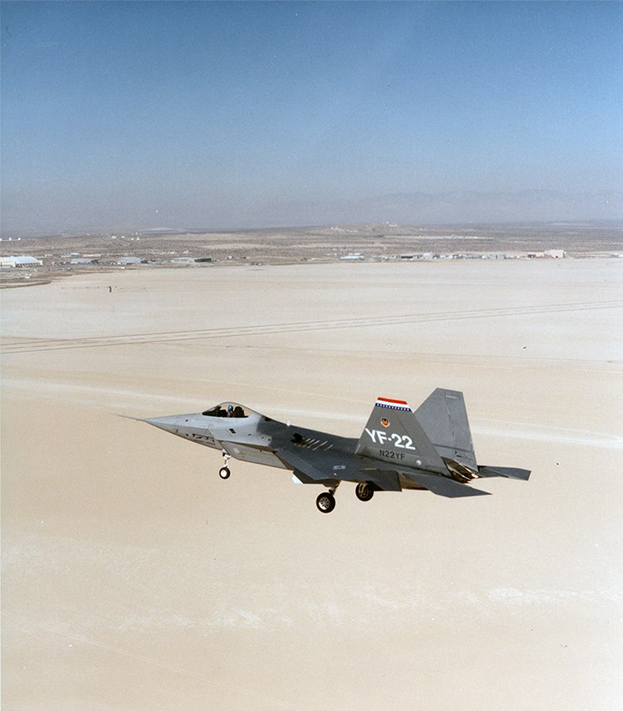 Nov. 3, 1990: The Lockheed Martin YF-22A demonstrated its supercruise capacity for the first time, reaching Mach 1.8 at 40,000 feet. During the supersonic portion of the flight, the aircraft used a third less fuel than it would if afterburners had been employed. 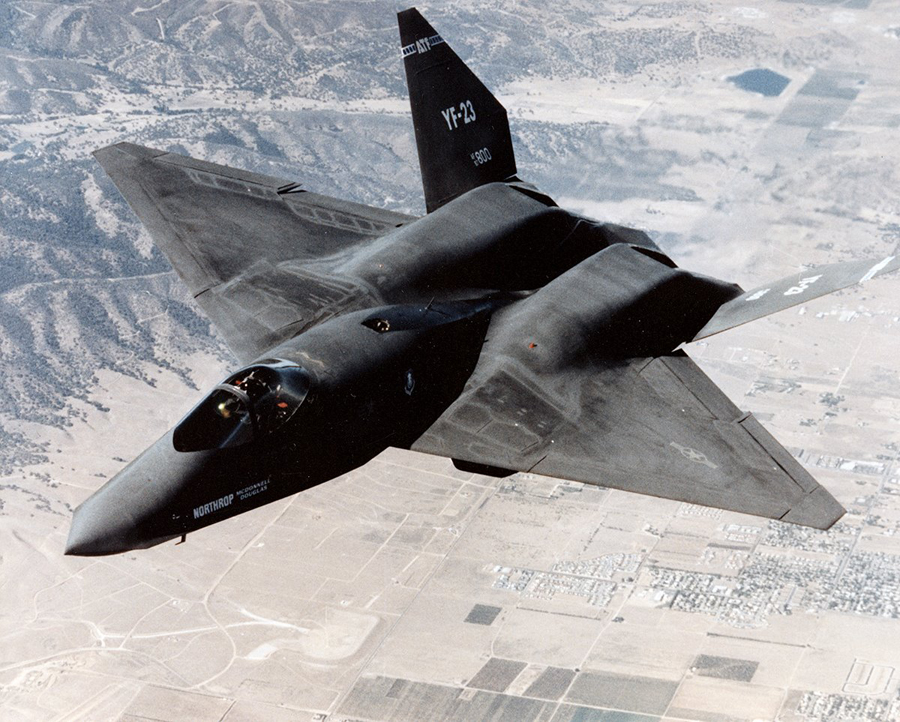 Nov. 4, 1990: During the first official demonstration of its supercruise capability, the Northrop-McDonnell Douglas YF-23A No. 1 accelerated to Mach 1.43 at 42,000 feet without afterburners.