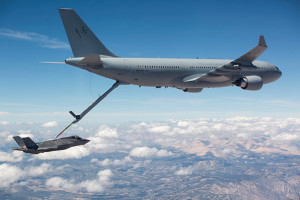 The Royal Australian Air Force has completed the first fuel transfer with the air refuelling boom from a RAAF KC-30A Multi-Role Tanker Transport to a U.S. Air Force F-35A Joint Strike Fighter at Edwards Air Force Base, Calif. Refuelling between the KC-30A and F-35A is an important step towards the KC-30As achievement of final operational capability and represents continued progress in the development of the F-35A.

A U.S. Air Force F-35 Joint Strike Fighter completed its first aerial refueling from a Royal Australian Air Force tanker here Sept. 25.
An F-35A completed 59 contacts with the refueling boom of a RAAF KC-30A Multi-Role Tanker Transport throughout a four-hour sortie. During five of those contacts the tanker transferred 43,200 pounds of fuel.
“The Australian Ministry of Defence, in coordination with the F-35 Joint Program Office, began the process of certifying the F-35 to refuel with the Australian refueling tanker. The local Edwards AFB effort has been a combination of the 416th, 418th, and 461st flight test squadrons,” said Lt. Col. Raja Chari, 461st Flight Test Squadron commander and Joint Strike Fighter Integrated Test Force director.
“The first sortie went great with a number of practice hookups, and handling and compatibility between the two aircraft was reported as excellent. On just the second sortie we transferred fuel, which was a first for the F-35 and also the U.S. Air Force (receiving fuel from an Australian KC-30A).”
Chief of the Royal Australian Air Force, Air Marshal Leo Davies AO CSC, described the trial as a significant step in the development of the KC-30A’s capability.
“Our KC-30A is an essential force multiplier. Mid-air refueling is critical to ensuring global reach for our aircraft, our people and our equipment,” Air Marshal Davies said. 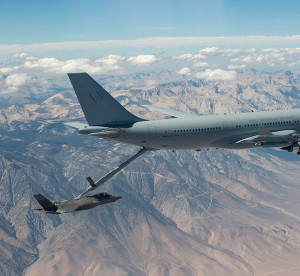 The KC-30A has two refuelling systems — the hose-and-drogue and Advanced Refuelling Boom System. The two different refuelling systems allow RAAF to support a wide range of coalition aircraft on Operation OKRA where a KC-30A is currently deployed to support combat operations against in the Middle East.

“Refueling between the KC-30A and F-35A is an important step toward the KC-30A’s achievement of Final Operational Capability and represents continued progress in the development of the F 35A.
“This achievement is significant because the future of Australia’s air combat capability is reliant on the successful partnership between these two aircraft and our ability to be interoperable with our international partners,” Air Marshal Davies said.
The KC-30A has two refueling systems – the hose-and-drogue and Advanced Refueling Boom System. The two different refueling systems allow RAAF to support a wide range of coalition aircraft on Operation OKRA where a KC-30A is currently deployed to support combat operations in the Middle East, according to the Australian Department of Defence.
“It just goes to show the seamless integration amongst the Air Force and our allies. Over the next few weeks we’ll continue working to expand the refueling envelope in altitude, airspeed, and a variety of configurations and weapons loadings on the F-35,” Chari said.
The RAAF has five KC-30As based at RAAF Base Amberley, Australia, and the RAAF will receive an additional two in 2018. A single KC-30A can carry a fuel load of more than 100 tons and remain 1,800 kilometers from its home base with 50 tons of fuel available for offload, for four hours.
Australia has committed to 72 F-35As for RAAF Bases Williamtown and Tindal, with the first aircraft arriving in late 2018. The F-35A will replace the aging F/A-18A/B Hornet with a 5th-generation networked fighter aircraft.

Editor’s note: Information for this release provided by the Australian Department of Defence.