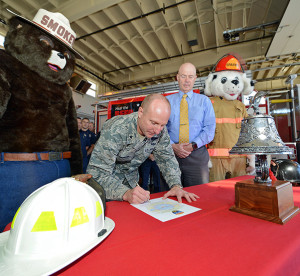 Fire Prevention Week runs Oct. 4-10 and commemorates the Great Chicago Fire in 1871.
On the 43th anniversary in 1911 of the Great Chicago Fire, the Fire Marshals Association of North America; the oldest membership section of the National Fire Protection Association, sponsored the first National Fire Prevention Day, deciding to observe the anniversary as a way to keep the public informed about the importance of fire prevention. This was expanded to Fire Prevention Week in 1922.
NFPA, which has officially sponsored Fire Prevention Week since its inception, selects the annual theme for Fire Prevention Week.
This year’s theme, “Hear the BEEP where you SLEEP; Every Bedroom Needs a Working Smoke Detector,” is aimed at keeping you, your family and your community safer from fire.
During Fire Prevention Week the Edwards AFB Fire Department will be providing educational materials and information on the leading causes of home fires, information about protecting your home and families with life-saving technologies, and the importance of home escape planning.
When President Calvin Coolidge proclaimed the first National Fire Prevention Week in 1925, he noted that in the previous year some 15,000 lives were lost to fire in the United States. Calling the loss “startling,” Coolidge’s proclamation stated, “This waste results from the conditions, which justify a sense of shame and horror; for the greater part of it could and ought to be prevented… It is highly desirable that every effort be made to reform the conditions, which have made possible so vast a destruction of the national wealth.”
The history of National Fire Prevention Week has its roots in the Great Chicago Fire, which happened Oct. 8, 1871.
This tragic conflagration killed some 300 people, left 100,000 homeless and destroyed more than 17,000 structures.
The origin of the fire has generated speculation since its occurrence, with the fact and fiction becoming blurred over the years.
A farmer living on the outskirts of Chicago, Catherine O’Leary, thought the same thing most Americans believe — “Fire prevention is not my job.” Then one of the most tragic fires recorded in American history was pinned on her and one of her cows, which reportedly knocked over a lantern the night of Oct. 8, igniting the blaze.
Although O’Leary’s name will forever be linked to that tragic incident, the National Fire Prevention Association and the firefighters of the Edwards AFB Fire Department want to ensure the families at Edwards do not suffer the same misfortune.
Intending to observe the fire’s anniversary with a more serious commemoration, the Fire Marshals Association of North America, the oldest membership section of the National Fire Protection Association, decided that the anniversary of the Great Chicago Fire should be observed not with festivities, but in a way that would keep the public informed about the importance of fire prevention.
NFPA continues today to make National Fire Prevention Week a priority and counts on the participation and efforts of tens of thousands of fire and safety professionals, emergency volunteers and other individuals working to reduce the risk of fire and the toll it takes on our society.

This year there is a full week of activities planned for Fire Prevention Week, and everyone is encouraged to participate in this important awareness campaign. 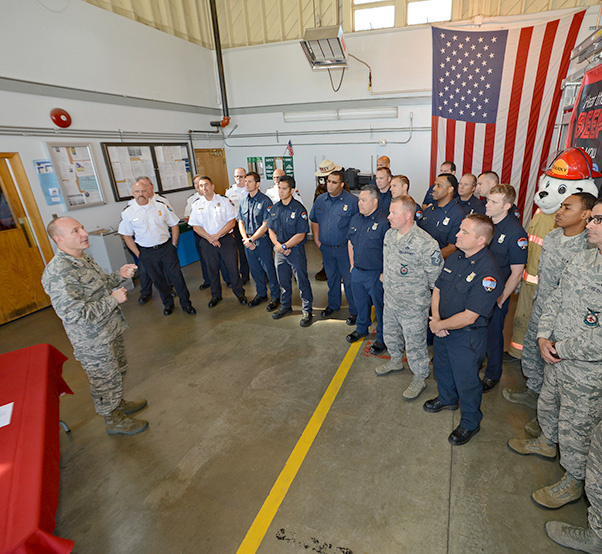