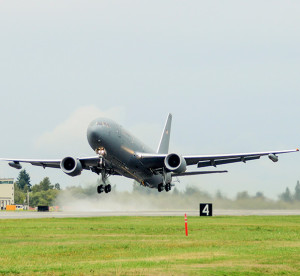 EVERETT, Wash.–The U. S. Air Force and Boeing celebrated an important milestone Sept. 25 when the military version of the KC-46 Tanker Program took to the skies for its first flight at Paine Field in Everett, Wash.
The KC-46 aircraft conducted its first tests before landing at Boeing Field International in Seattle. This is a critical step in the development of the KC-46 Tanker program that will deliver 18 production aerial refueling aircraft to the Air Force in early 2018.
The KC-46A is intended to replace the U.S. Air Force’s aging fleet of KC-135 Stratotankers, which has been the primary refueling aircraft for more than 50 years. With more refueling capacity and enhanced capabilities, improved efficiency and increased capabilities for cargo and aeromedical evacuation, the KC-46A will provide aerial refueling support to the Air Force, Navy, Marine Corps as well as allied nation coalition force aircraft.
As the lead developmental test organization for the program, the 412th Test Wing at Edwards Air Force Base, Calif., has the responsibility for virtually all aspects of developmental test for the KC-46.