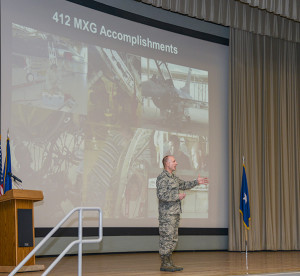 Schaefer started things off by showing “Selfless,” a short film in the “Heritage Today” Air Force video series.
The video shows a number of programs that exemplify the Air Force core value — Service Before Self. Three of segments of the video came from the Air Force Test Center; the Bell X-1, a high-altitude jump and a B-25 bomber raid over Tokyo during World War II.
Speaking to Airmen, DOD employees and contractors alike, Schaefer said, “I want you to know Airman is Airman to me and to the Air Force, when you see this video Airman is you.”
Over the last year, the men and women of the 412th TW have been busy working hard. Schaefer shared a few of the accomplishments of base civil engineering, electronic warfare, the 412th Medical Group, maintenance group, test engineering group, U.S. Air Force Plant 42, test pilot school and 412th Mission Support Group.
The major programs at Edwards are the F-35 Joint Strike Fighter program and the KC-46 aerial refueler, which had its first flight out of Everett, Wash., Sept. 25.
Fiscal Year 2015 strategic action plan accomplishments included consolidating the 445th and 416th Flight Test Squadrons and standing down the Speckled Trout distinguished visitor mission, merging them with the 418th FLTS.
Airman Against Drunk Driving was revamped, the gym was made accessible 24/7 and the Test Wing worked on a ground based sense avoidance system that will track unmanned aircraft systems.
The strategic goals for 2016 are to exceed customer expectations through agile mission execution and prioritize resources to support Air Force requirements. The wing will also strive to sustain and improve the installation and test and evaluation infrastructure. Schaefer shared that in 2016 it will be a priority for the wing to develop, support and inspire people as well as develop a strategic innovation plan.
The commander gave a brief update on how the mission will be affected by the federal budget. Congress passed a continuing resolution that will provide funding through Dec. 11. If a budget is not passed in December, Schaefer stated that on the modernization side, the mission should not be adversely affected, but the operating and management funds will be around $12 million short.
After meeting with four congressional representatives on Capitol Hill with Schaefer last month, Staff Sgt. Will Smith, Air Force Materiel Command Non-Commissioned Officer of the Year, believes Congress is genuinely concerned with the needs of Airmen. 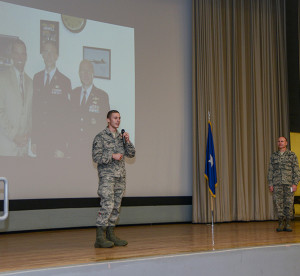 Staff Sgt. Will Smith, Non-Commissioned officer of the year for Air Force Materiel Command, shared details from his recent trip to Capitol Hill with Brig. Gen. Carl Schaefer, 412th Test Wing commander. While there, they got the chance to speak with four congressional representatives.

“This was comforting to me because when I hear of things like a government shutdown, BAH cuts and Tricare changes, sometimes I don’t always think the government is looking out for our best interest,” said Smith. “But after this trip I am fully confident that our representatives are doing the best they can with the resources they have to make sure that we have everything we need.”
David Wheaton, 412th Test Wing technical director, also addressed money matters related to salary control points for government employees who fall under the AcqDemo system here at Edwards. The control points were implemented Oct. 1 for fiscal 2016. The control points indicated the maximum salary that can be made when an employee performs their duties at the maximum level.
Employees that are already above their salary control point will not lose any salary. Those below that point will have some room to grow.
For personnel that are at their salary control point, Wheaton said it will be an opportunity to talk to supervisors about pursuing additional training to make career advances.
“Your pay pool managers and supervisors participated in the discussion looking at each position to see all the contributions that the position makes to the wing’s mission and assigning really a salary equal to that contribution,” said Wheaton.
Enlisted Airmen are also facing changes to how they will be promoted. For starters, not every person will receive a senior leader endorsement and all promotions will be based on performance. The performance board will use the three most current Enlisted Performance Reports (EPRs) for evaluation.
“This is good for our Air Force, we’re going to highlight performers and tie that to promotion,” said Schaefer. “We’re going to continue to generate the best enlisted leaders in our enlisted force.”
Schaefer also shared the results of a climate assessment done in July. The assessment found that around 90 percent of the base population is aware of helping agencies and that they work in an environment where offensive comments and materials are not tolerated. He encouraged the other 10 percent to speak up about problems in the work place and download the MyMC2 app which has links to helping agency websites.
The findings also revealed that 65 percent of the base feels that the overall health of their unit has improved from last year. Base leadership will continue working towards increasing that percentage even more over the next year.
He reminded everyone that there is zero tolerance in the test wing for harassment, discrimination and driving under the influence. While the number of traffic tickets and DUIs on base has decreased in the last year, it is vital to the base population’s safety that drivers operate their vehicles responsibly. No amount of alcohol is acceptable to consume before getting behind the wheel.