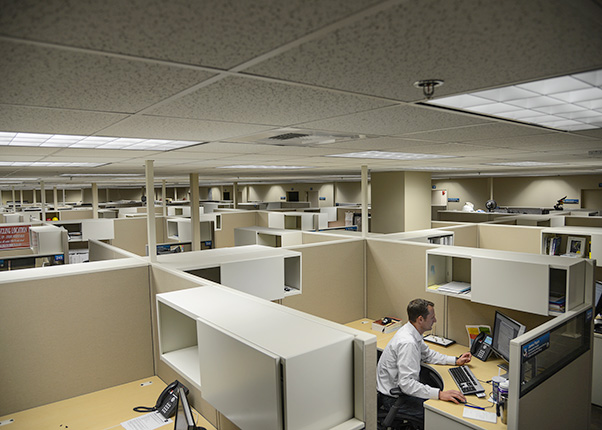 Building 3735 was the first at Edwards to be renovated following the U.S. Air Force space utilization guidelines. The guidance is designed to execute Air Force initiative “20/20 by 2020,” which aims to reduce the Air Force’s property footprint and associated operating costs 20 percent by the year 2020.

Building 3735, once a large open warehouse space, is now home to an army of almost 100 office cubicles.
The new residents of 3735 are 412th Civil Engineering Group Environmental Management Division, the 412th Logistics Readiness Squadron, the Air Force Civil Engineers Center and some employees of JT3.
The building was the first at Edwards to be renovated following the space utilization criteria outlined in the Air Force’s AFH 32-1084 guidelines. The guidance is designed to execute Air Force initiative “20/20 by 2020,” which aims to reduce the Air Force’s property footprint and associated operating costs 20 percent by the year 2020.
In June 2010, President Barack Obama signed a memorandum to all federal agencies charging them to dispose of unneeded real estate with a focus on utilizing installations more efficiently by sustaining only the facilities needed to conduct the mission. The Air Force is meeting the President’s challenge through the existing “20/20 by 2020” initiative.
The reduction effort will involve consolidating operations into “right-sized” facilities and demolishing buildings that fail to meet the guidance in AFH 32-1084.
Kenneth Green, Space Utilization and Consolidation Program manager, said the project was a “consolidation, renovation, demolition and optimization, all in one.” 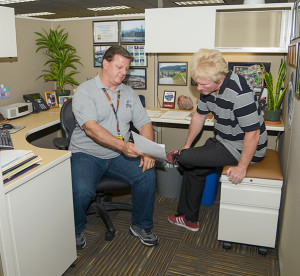 The new cubicles in the Bldg. 3735 are 64 square feet with modular furniture, including a roll away filing cabinet with a cushion on top to double as an extra seat.

The new design for 3735 only touched a portion of the first floor of the two-story building. During the renovation process, the space was made energy efficient with carpet installed and the ceiling lowered. As a warehouse space, the area was wide open with concrete floors, making it hard to control the temperatures and energy usage.
Cubicles in the new office space are 64 square feet with modular furniture including a roll away filing cabinet with a cushion on top to double as an extra seat.
“People can’t envision it, they say, ‘that’s small.’ An eight-by-eight [feet] cubicle is bigger than you think, most people don’t use that much space anyway,” said Green.
As the project progressed, they ran into a few unique challenges. For example, there are a large number of poles throughout the building that could not be removed. The designers had to create a configuration where every cubicle is usable without a single pole inside of a cube space or blocking an entrance.
The building was also equipped with a space-saving library system to reduce the amount of paperwork stored in individual cubical spaces.
“Everybody loves it,” said Joe Thomas, 412th Civil Engineering Group Environmental Support Section chief.
Thomas has worked in EM for more than 20 years and this is the first time his organization has had a permanent home. When he started, EM was in a trailer and has moved to several different temporary facilities since that time. But now, with the optimization of Bldg. 3735, EM is finally “home.”
“It’s a big puzzle to find out who fits where for optimum use of space,” said Thomas. “We may get company some day and that’s the whole idea, if there’s space it’s going to get utilized.” 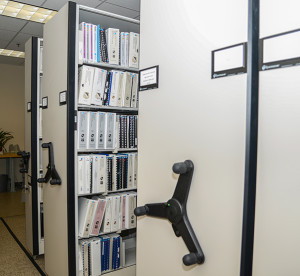 A space-saving library system in Bldg. 3735 reduces the amount of paperwork stored in individual cubical spaces.

According to Green, next on the list to move is the 412th Comptroller Squadron. They will be placed on the first floor of Bldg. 3000 where the Personnel Section and Air Force Test Center Directorate of Personnel used to be.
Bldg. 2650A, where Environmental Management was formerly located, was demolished. As a temporary facility, that demolition was an “easy target.” The old Airman and Family Readiness Center in Bldg. 7020 was the first administrative-style building to be demolished under the space utilization guidance implemented April 2012. That demolition is currently wrapping up.
“[Some] buildings have not been used in the last 10 years and yet we’re providing gas and electricity and water to those facilities, and not only that, but we’re keeping the walls painted,” said Thomas.
When deciding which buildings will be demolished, 412th CE looks at the age of the building and whether it is cost effect to repair. EM also conducts an environmental assessment in accordance with the National Environmental Policy Act before any action is taken.
After months of planning, a building will be marked with one of three fates. It may be optimized for an appropriately-sized organization to move in. It could become home to several smaller units, or it will be demolished.
According to Thomas and Green, the space optimization efforts will have a positive environmental impact, reduce energy and maintenance costs and leave no space unused.
For additional information on space utilization or to tour Bldg. 3735, call Joe Thomas at 661-277-1499.