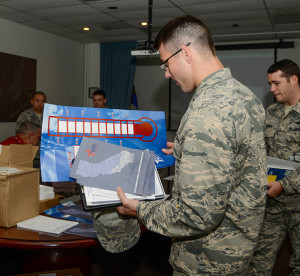 Unit representatives for this year’s Combined Federal Campaign gather posters and other materials needed to collect donations after training in Bldg. 3950 Oct. 19.

This year’s Combined Federal Campaign is going on now at Edwards AFB and will continue until Nov. 20.
Capt. Bandy Jeffrey, 2015 CFC Edwards installation point of contact, held a training session Oct. 19 to teach unit representatives how to take donations.
CFC itself is not a charity, but a fundraiser, which is a convenient way for active military and government civilians to donate to their favorite charities. Last year, Edwards raised around $300,000. This year, they have set their goal at $335,000 for the six-week campaign.
“This figure is large enough to make an impact on many charitable organizations yet very achievable based on past campaigns. If you are a federal employee and want to donate right now or at any time; go online to your myPay account, click on the CFC link and enter the campaign code 0096 to get started,” said Jeffrey.
One of the benefits to the charities through CFC is the ability for donors to create a budget. Along with being able to make a one-time donation, CFC donations can be made in smaller amounts throughout the year from each pay check, civilian or military. 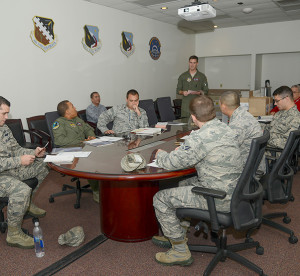 The campaign organizers are trying to keep the campaign personal this year by reaching out to every federal employee on base. Unit representatives will provide information on the various ways to donate through CFC such as a one-time donation by check or a recurring electronic payment donation.
Other ways of donating online can be found at http://www.cfcofgreatersocal.org/_root/. E-Pledge users will be prompted to enter a campaign code. In their release form, donors should report Edwards AFB and their group or unit. The campaign code for Edwards is 0096 and donors must include the 412th Test Wing as their organization in order for contributions to count towards the overall base fundraising goal.
Donors have the option of choosing which of 22,000 charities, registered with the Internal Revenue Service, will receive their donation(s). The campaign guide is designed to make finding the right charity easy, by answering commonly asked questions about the charities listed, like their overhead costs. CFC donates to a wide variety of charity genres including everything from children’s programs and medical research to animal rescue.
‘Universal giving’ allows donors who are away from home to find charities in their hometown.
To make a donation, or for more information, talk to your unit CFC representative. You can also visit www.cfcofgreatersocal.org/_root/ to donate and find out about the different charities available.