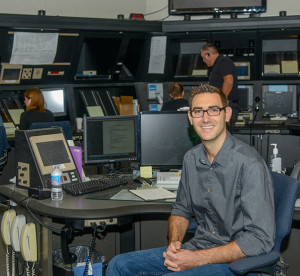 A Federal Aviation Administration air traffic controller on Edwards was recently honored with the FAA’s Southwestern Regional Office’s Award for Innovation Excellence.
Blake Eden was presented with a plaque at the FAA’s AWP Western-Pacific Region 2015 Regional Administrator’s awards ceremony Oct. 7 at the FAA regional headquarters in Los Angeles, Calif.
Eden has worked as an air traffic controller for four years now. He also serves as a trainer for new controllers at Edwards’ FAA unit at the Joshua Control Facility on base.
“[Being an air traffic controller is] a good challenge, no two days are the same,” said Eden. “I enjoy the idea that I can help other pilots do what I love to do – which is fly.”
Eden received his award, in part for advocating a procedural change that addresses an area with high traffic conflict. A couple of years ago, the City of Lancaster implemented a new Law Enforcement Ariel Platform System (LEAPS) into their force. According to Eden, since that time the Cessna 172’s constant presence has created some conflict with the rest of the flying community.
To mitigate any potential issues, Eden hosted a community forum in August to help bring a broader scope of awareness and understanding between all flying parties. Users at in Palmdale and at the William J. Fox Airfield, to include NASA, Boeing, Northrop and Lockheed Martin, were all invited. A representative from the LEAPS program was on hand to answer questions. There have also been email discussions and a second forum for military members Oct. 21.
“We are the central agency that is talking to that pilot when he’s out there,” said Eden. “We’re going to the community and trying to educate the community on his presence and then trying to hear the community’s feedback so that we can go and help others mitigate risk.”
One of the main issues pilots have encountered is being surprised by LEAPS in flight, according to Eden.
“It’s not a threat, just awareness we need everybody to have,” he said. “LEAPS and the military -neither one of us are wrong to be out there, but we need to work together; that way we can both accomplish our jobs well.”
Eden was also recognized for his innovative techniques in training new air traffic controllers. As a private pilot, Eden is able to offer a unique perspective to non-flying controllers during training. For instance, he shares the series of actions a pilot must take to navigate when he’s in the cockpit.
“You can very easily task-saturate a pilot by giving them too much information. I can say, ‘you maybe gave them too much info, here’s what a pilot has to do when you give them that info,'” Eden said.
According to Eden, the Joshua Control Facility is one of the smaller radar sites with around 30 controllers on staff. The controllers operate the R-2508 Airspace and some national airspace over Palmdale, Lancaster and Victorville. In addition to sequencing arrivals into those cities, they orchestrate aircraft heading into Burbank, Van Nuys, Santa Monica and Los Angeles.
They also support the Air Force and Navy on the military side of their operations.
“The towers have four miles of protection around them, but if you’re going from Los Vegas to here, there’s all that space in between and we take all that space in between,” he said.
Eden’s award was peer-nominated and his nomination came from his supervisor, Kevin White.
“It was a great surprise, I was very honored,” said Eden. “You try to do the best for the flying community that you can do and people might recognize that. You don’t do it to gain the recognition, but it’s also very nice to be appreciated.”