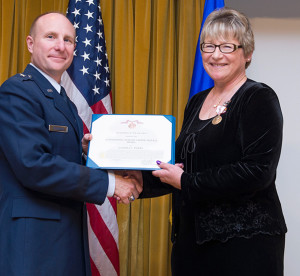 The 412th Test Wing and Air Force Test Center said goodbye to Sandra Perry during a retirement ceremony and lunch Oct. 30 at Club Muroc.
Perry served as a federal civilian employee from March 4, 1985, to Oct. 31, 2015.
Most notably, her last assignment was as director of Financial Management of the 412th Test Wing.
According to one of her award citations, Perry’s exceptional leadership and management abilities have contributed immeasurably to the Air Force mission.  She developed an internal data analysis process and metric, which identified more than $40 million in uncollected earnings and recommended corrective actions to automate systems and accounting processes/procedures.
Perry initiated a directorate-wide Air Force Smart Operations for the 21st Century project, which enabled her division to absorb an 11 percent manpower reduction while taking on new additive workload due to the new Air Force Materiel Command 5-center construct and financial improvement audit readiness requirements. All this while managing the 412th TW’s annual $700 million program.
Under Perry’s leadership, the FM Directorate earned outstanding ratings in 2013 and 2015 unit inspections.