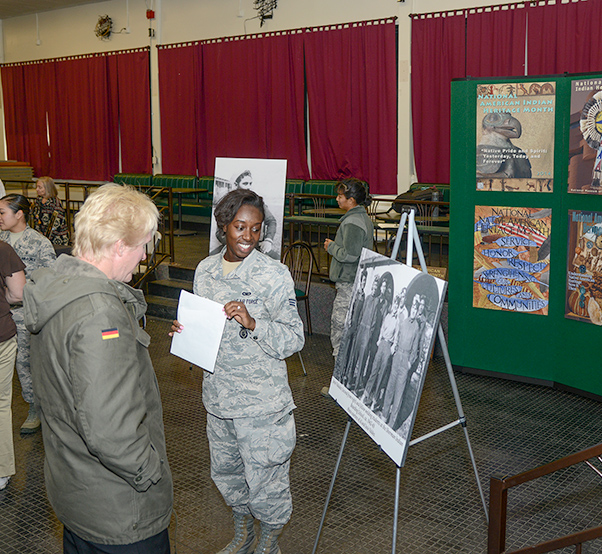 Airmen were stationed at easels with pictures of Native American service members ready to answer questions during the Native American Indian Heritage Month celebration at the Oasis Nov. 5.

This year’s Native American Indian Heritage Month celebration Nov. 5 was a mix of art, history and live music.
As guests entered the Stripes Lounge at the Oasis Community Center they were greeted by seven large posters depicting Native American service members as a tribute to them.
Airmen were stationed at each easel ready to answer questions about the individuals memorialized in the display.
Throughout the room there were a large number of prehistoric and modern artifacts of Native American origin such as arrowheads, baskets and a talking stick. The items were provided by the Cultural Resource Program and Equal Opportunity Office. There were also over 40 posters of Native American architecture, art, portraits, western art and biographies.
Nearby, Nadiya Littlewarrior, Spirit Vessels Studio, Potawatomi gourd artist, displayed her work and heritage.
She harvests the hard shell vegetables and turns them into works of art that visually resemble clay pottery. 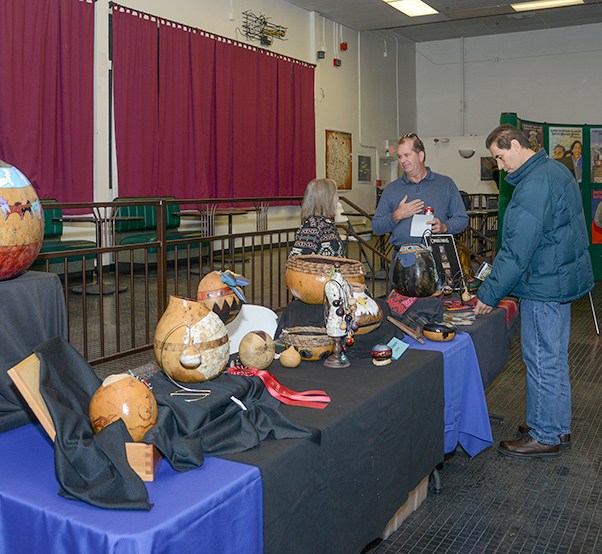 Artist Nadiya Littlewarrior, Spirit Vessels Studio, displayed her artwork made from hard shell gourds. The gourds have traditional significance, once used for many household purposes.

At her table there was a canteen gourd, traditionally used for keeping water fresh and cool. Large bushel gourds were used for a variety of purposes like cooking, bathing and storage. Some of the smaller gourds she said were historically used as spoons and gardening tools.
One of her gourds had been crafted into a mask. According to Littlewarrior, some Cherokee tribes would use the same type of mask to scare children into staying inside the boundaries of their camp.
While people took in the displays, the sound of blues rock filled the air. The Blue Mountain Tribe played 10 original songs including “Redman Blues” and “Where have all the buffalo gone.”
The five-member band is all Native American with members that are Apache, Cherokee, Chumash and Yaqui.
Robin “Bubba” Hairston, 412th Civil Engineering Group, is the band manager and also plays harmonica. According to Hairston, their inspiration comes from a desire to help Native American youth from impoverished tribes and people with disabilities. He said the band donates some of the proceeds from their CDs to charities that help those people and also play concerts for them.
The Blue Mountain Tribe sat down for a live interview before their performance.