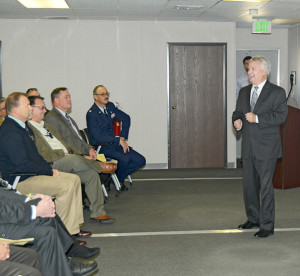 PALMDALE, Calif.–A ceremony was held Nov. 4 to introduce the new director of 412th Test Wing Operating Location Air Force Plant 42 in Palmdale.
John Esch was introduced as the new government civilian leader in front of Plant 42 employees, 412th TW leadership and contractor representatives.
Esch comes to Plant 42 after serving as the Airside Control Operations manager at McCarran International Airport in Las Vegas. There, he was responsible for the Airport Control Center, all ramp activities and gate scheduling for the eighth busiest airport in the world. Before that, Esch had a 32-year career in the Air Force as an enlisted member, officer and civilian. He entered the Air Force as a security forces defender and later commissioned as an officer and served in air traffic control and airfield operations.
Plant 42 is home to some NASA operations, large contractors such as Northrop Grumman, Lockheed Martin, Boeing, and employs about 9,000 people.
412th TW Operating Location Air Force Plant 42 provides command and control of the airfield complex and industrial facilities for production, modification, depot maintenance and flight test of U.S. aerospace systems.
Esch will serve as the 412th TW’s top civilian leader providing base operating support and airfield management functions. Currently there are roughly 196 personnel present to handle the organic sustainment, maintenance, security and safety of the installation itself.