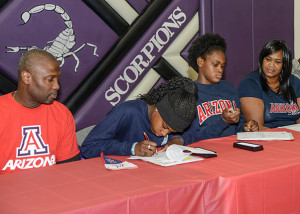 On Nov. 13, in front of the school and family, Desert High School seniors Devyn Cross (signing) and Elizabeth Shelton signed National Letters of Intent to attend the University of Arizona next fall on volleyball scholarships.

On Nov. 13, in front of Desert High School students and family, seniors Devyn Cross and Elizabeth Shelton signed National Letters of Intent to attend the University of Arizona next fall.
Both students will receive a full-ride volleyball scholarship amounting to around $120,000 over a five-year period.
“Today dreams are getting wings,” said Biology, Anatomy and Physiology teacher, Debbie Lewis.
Cross and Shelton both played as middle blockers in high school. According to Lewis, they were discovered one year ago when University of Arizona coach, David Rubio, was contacted about two “young, undiscovered volleyball players out here in the desert.”
After Rubio attended a game, Cross visited the University of Arizona in the fall of 2014 and within two weeks of that visit, was given the opportunity to verbalize a commitment. Shelton’s verbal offer came in July of 2015 after she recovered from injuries and played club volleyball for a season. She also attended two summer camps, one of which was at the University of Arizona.
The official National Letter of Intent signing window opened Nov. 11 and closed Nov. 18. Cross, Shelton and their parents signed Nov. 13 in the school gym while members of the student body cheered them on. The documents were immediately faxed to the university and then the original copies were sent by mail. 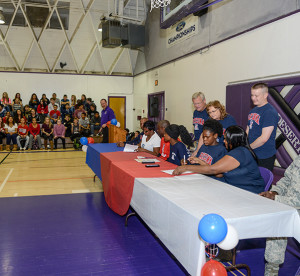 Devyn Cross, Elizabeth Shelton and their parents signed National Letters of Intent to attend the University of Arizona Nov. 13 in the Desert High School Gym while members of the student body cheered them on.

“It was a golden opportunity for me, which is why I accepted. I am extremely, extremely grateful, and honestly I would not be here at all without the coaches and the team,” said Shelton.
Shelton joined the Scorpions volleyball team her freshman year at DHS where she learned about the sport for the first time. Her best game in high school so far was during the California City Tournament against Santa Clarita Christian.
“We played so well in that game it was ridiculous. We were on point, we had rhythm, we had fun, we talked, we laughed. It was like we had passion, fire,” she recalled.
Arizona appealed to Shelton because of its academic support programs for student athletes. She plans to study neuroscience and microbiology. It was her eighth grade teacher that really inspired her to love science.
“I would like to do research concerning cognitive science, basically to find out why people do what they do in terms of the brain,” said Shelton. “The brain has always been so fascinating to me. The fact that something so small could control all of this — it’s just amazing to me.”
Cross also learned how to play volleyball at Desert High School. During her very first game she blocked a serve and quickly learned that wasn’t allowed.
In spite of her error, “it was really fun, it was my first time ever playing volleyball.”
She has not chosen a major yet, but hopes to become a nurse practitioner, study sports medicine or even become a sports announcer.
“Other offers came, but after I visited Arizona for the first time I was set on that school. It makes you feel like a family, it makes you feel like you’re wanted there,” said Cross. “I’m just really looking forward to moving to the next level, creating new friendships, increasing my skills and hopefully trying out for the Olympic team.”