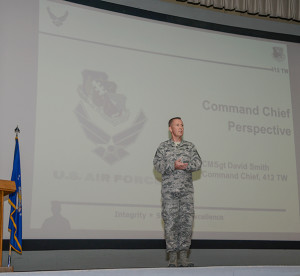 Chief Master Sgt. David Smith, 412th Test Wing command chief, held two enlisted calls at the base theater Dec. 7 emphasizing professionalism in the Air Force. He covered everything from what’s being taught in basic training to the changes that are being implemented in the Enlisted Evaluation System.
According to Smith, in order to produce a more professional Air Force, basic training graduates will attend a one week series of courses teaching professionalism. A video in the Heritage Today video series depicted the Air Force culture of selflessness; a culture that Smith reminded is learned over time, starting at basic training.
One reminder of that culture is the new “Little Blue Book” that contains the core values, oaths, code of conduct and the Airman’s creed. He said it was designed to fit in an Airman’s cargo pocket and intended to be kept all the time. Smith had 50 copies printed for each group to distribute.
Hot topics in the Enlisted Evaluation System were the endorsement and stratification process, promotion recommendations and future roles. Senior raters endorsements are only allowed for those that are stratified and all others receive deputy or intermediate endorsements.
Promote now and “must promotes” on Enlisted Performance Reports can only be given by final evaluators. For larger units the final evaluators may be the senior, deputy or intermediate rater.
Supervisors also have the ability to identify potential future roles for Airmen. The future role is a recommendation for a potentially good fit for a job within the individual’s career field.
He also touched on Developmental Special Duty stating that being vectored for a special duty does not guarantee selection. Being vectored does however reflect positively in an EPR because only the “crème of the crop” is nominated.
Continuing with the theme of professionalism, Smith encouraged those who participate in social media to do so with caution. Specifically, he addressed sites that allow Airmen to “Ask a Chief” or “Ask a First Sergeant.” There’s nothing inherently wrong with using the site he said, however, if you have an issue at work, he encouraged the Airmen to give their leadership a chance to work it out instead of taking it to social media.
He also reminded Airmen not be reckless when it comes to driving. In the Smith’s first month at Edwards there were three DUI’s, 15 total last year. Since then Airmen Against Drunk Driving has been revamped and re-emphasized. Today the DUI count is down to only four and 43 people have utilized AADD. 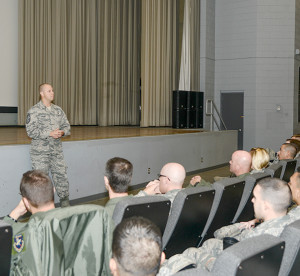 An alternative program is also being emphasized, “Arrive Alive,” which allows an Airman to call for a taxi to get home safely.
Smith also used the enlisted call as an opportunity to introduce Chief Master Sgt. Christopher Lantagne, Air Force Test Center command chief. Lantagne recently came to Edwards from Tyndall AFB, Fla.
Lantagne, who is new to the test environment, said that he was excited about joining Edwards because, “When you think about what you do day to day, nothing goes out without you. That’s a pretty important task you undertake.”
After a question-and-answer session, Smith thanked all the Airmen for a great job this year, which he said made the mission stronger than last year, and finished by wishing all a safe and happy holidays.