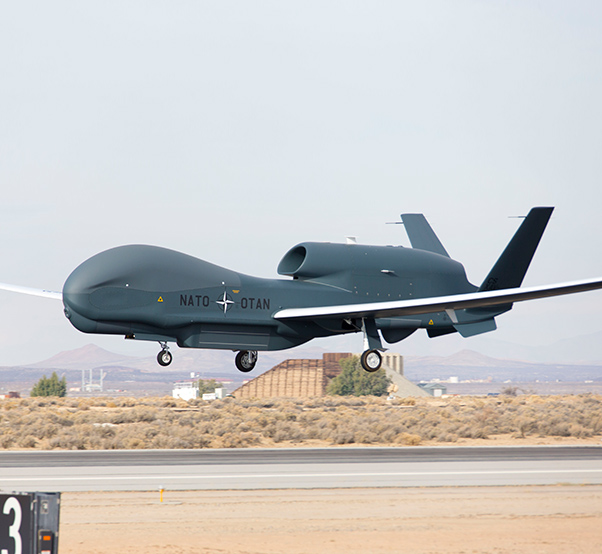 NATO’s first Alliance Ground Surveillance (AGS) aircraft arrived at Edwards Air Force Base, Calif., Dec. 19 completing its first flight. The aircraft took off from U.S. Air Force Plant 42 in Palmdale, Calif., and arrived at Edwards AFB. The test flight marks the start of six months of ground and airborne testing at Edwards before the aircraft is sent to its new home in Sigonella, Italy. NATO AGS is a derivative of the wide-area surveillance Global Hawk, with a few small changes in the communications software to meet certain criteria for operation in Europe.

NATO’s first Alliance Ground Surveillance (AGS) aircraft arrived at Edwards Dec. 19 completing its first flight.
The test flight marks the start of six months of ground and airborne testing at Edwards before the aircraft is sent to its new home in Sigonella, Italy.
NATO AGS is a derivative of the wide-area surveillance Global Hawk, with a few small changes in the communications software to meet certain criteria for operation in Europe.
“They’ve got a [few] differences, but it’s very similar to a USAF Global Hawk,” said Roberto Garnica, Global Vigilance Combined Test Force, NATO AGS project manager.
The first flight allowed the test team to observe the flying characteristics of the aircraft during a variety of flight performances and at varying altitudes.
According to Garnica, this test varies from other Global Hawk testing because the Global Vigilance CTF is not the executing test organization. While Edwards Range Control and safety officers will be present, responsibility for the test and aircraft falls on Northrop Grumman’s team including the pilots, test conductors and directors.
“Because it is a Direct Commercial Sale to NATO, the Air Force is never going to own or possess it. So we are a participating test organization,” said Garnica.
The first flight was an important milestone for Northrop Grumman Corporation and NATO Alliance Ground Surveillance Management Organization members of NATO’s Alliance Ground Surveillance Management Agency.
Northrop Grumman is scheduled to begin ferrying the first NATO AGS aircraft to Italy in 2016. The NATO AGS system will include five aircraft and European-sourced mobile and transportable ground stations that will provide data link connectivity, data processing and exploitation capabilities to multiple deployed and non-deployed operational users.
All 28 Alliance nations will take part in the long-term support of the program, but it is initially being procured by 15 NATO nations: Bulgaria, Czech Republic, Denmark, Estonia, Germany, Italy, Latvia, Lithuania, Luxembourg, Norway, Poland, Romania, Slovakia, Slovenia and the United States.
The final product will be used for collective defense, crisis management and cooperative security.
Like the Block 40 RQ-4 Global Hawk, the unmanned aircraft has the ability to fly for up to 30 hours at a time. The high-altitude long-endurance system will perform all-weather, persistent wide-area terrestrial and maritime surveillance in near real-time. The NATO-owned and operated system will provide intelligence, surveillance and reconnaissance capabilities to support a range of NATO missions such as protection of ground troops and civilian populations, border control, maritime safety and humanitarian assistance.
The aircraft is equipped with leading-edge technology, including the Multi-Platform Radar Technology Insertion Program sensor. The MP-RTIP sensor will provide critical data to commanders during operations, in any weather, day or night. Utilizing the MP-RTIP sensor, the NATO AGS system will be able to fuse sensor data, continuously detect and track moving objects and provide imagery of selected objects.