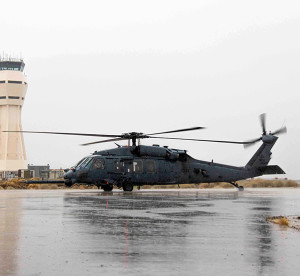 A HH-60G Pave Hawk from Nellis Air Force Base, Nev., will be at Edwards AFB, Calif., until Jan. 22, 2016, where the 412th Test Wing and 418th Flight Test Squadron are providing facilities, range safety, photographic documentation and maintenance support equipment for testing of the GAU-21 .50-caliber machine gun. Edwards AFB’s Gun Harmonizing Range will be used primarily for the testing.

Arriving in the rain, an HH-60G Pave Hawk landed Jan. 5 at Edwards Air Force Base, Calif., to begin testing the ballistic dispersion of a GAU-21 .50-caliber machine gun.
The Pave Hawk will be at Edwards AFB until Jan. 22 where the 412th Test Wing and 418th Flight Test Squadron are providing the facilities, range safety, photographic documentation and maintenance support equipment.
The 96th TW at Eglin AFB, Fla., and the 412th TW partnered up to provide Detachment 1, 413th FLTS from Nellis AFB, Nev., a location for their test team to accomplish baseline ballistics testing. That location is Edwards AFB’s Gun Harmonizing Range.
The testing is part of the Air Combat Command’s HH-60 defensive weapons system upgrade modification proposal.
The modification proposal requires the new weapon to be an open bolt system, have a longer barrel life, a higher cyclic rate of fire, be lighter weight, and have reduced recoil. The selected weapon must also be used currently by other Defense Department services.
According to James Cooley, the technical director for Det. 1, 413th FLTS, the closed-bolt GAU-18 defensive system, which has been used on the HH-60, has demonstrated a short barrel life (3,000 rounds), relatively low cyclic rate of fire (550 rounds per minute), high recoil, and is vulnerability to unsafe ammunition “cook-offs.”
The FN Herstal M3M, designated the GAU-21, is an open bolt system with a barrel life of 10,000 rounds, a cyclic rate of fire of up to 1100 rounds per minute, and reduced recoil over standard .50-caliber weapons due to the use of a soft mount.
As a proven weapon system, the current test effort is focused on integrating the GAU-21 into the HH-60G weapon platform using the Gun Mount/Ammunition Handling System, which was designed for the Air Force by the Navy.
The objective of this test effort is to evaluate the ballistic dispersion of the GAU-21 .50-caliber machine gun mounted to the HH-60G via the GAU-21 GM/AHS when operated in the fixed forward fire and fixed side fire modes.
The Pave Hawk, a variant of the UH-60 Blackhawk used by the Army, is stationed at Nellis AFB. Its primary objective is combat search and rescue. The combat crew of four includes the pilot, co-pilot and two special mission aviators as well as three Air Force pararescuemen for rescue operations.
The Combat Search and Rescue Combined Test Force, located at Nellis AFB, is comprised of Det. 1, 413th FLTS and the 96th TW, which fall under Air Force Materiel Command, and conducts developmental testing. ACC’s 88th Test and Evaluation Squadron and 53rd TW, also at Nellis AFB, conducts operational testing.
The 823rd Maintenance Squadron is also providing aircraft and weapons maintenance support.
The Pave Hawk differs from the Blackhawk in its auxiliary fuel tanks, aerial refueling probe and forward-looking infrared. It also has a color weather radar, integrated electronic warfare suite, external gun mount, and ammunition handling system as well as an integrated navigation suite.