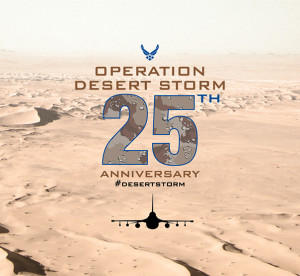 Jan. 17 marks the 25th anniversary of the start of Operation Desert Storm.
On the morning of Aug. 2, 1990, Iraq invaded nearby Kuwait. In less than four hours, Iraqi forces occupied the capital, Kuwait City, and Iraqi president Saddam Hussein soon annexed the country as the 19th province of Iraq.
In response, the U.S. government initiated Operation Desert Shield on Aug. 6 to deter and contain potential attacks against neighboring countries. By Aug. 21, the United States had based fighter, attack, reconnaissance, electronic warfare, airlift, and tanker aircraft in the Gulf region.
At the end of November, the United Nations Security Council passed Resolution 678 authorizing member states, cooperating with the government of Kuwait, to use “all necessary means” to enforce a prior resolution that demanded that Iraq withdraw unconditionally from Kuwait.
On Jan. 12, 1991, Congress authorized the use of U.S. armed forces against Iraq, pursuant to Resolution 678. When the U.N.’s Jan. 15 deadline for withdrawal passed, President George H. W. Bush signed a national security directive authorizing U.S. military action.
Then, on Jan. 16, 1991, the largest air campaign since World War II was launched to enforce the resolution that demanded Iraq’s withdrawal from Kuwait.
By the end of the day, Iraq was well on the way to defeat. The attacks drove Saddam Hussein and his leadership underground, heavily damaging critical military support networks such as command and control, communications and intelligence capabilities, integrated air defenses and power generation.
For the Air Force, the initial phase air campaign sought air superiority. It used an arsenal of more than 30 aircraft types flying more than 69,000 sorties, ultimately propelling the Air Force to gain and maintain control of the air domain.
A group of HQ U.S. Air Force planners, dubbed the Checkmate Planning Group, developed concepts incorporated into Operation Desert Storm’s air campaign. The planners advocated viewing the enemy as a system, rather than groups or specific military units, and sought to physically paralyze that system with an air campaign against five “rings” or essential centers of gravity:  leadership, organic essentials, infrastructure, population and fielded military forces.
Disrupting the command and control of enemy forces and convincing enemy commanders that they could not achieve their goals at a reasonable cost were key elements of the strategy. The planners also sought to achieve effects by convincing the enemy to take desired actions, as opposed to victory through a strategy of annihilation or attrition.
Desert Storm marks the first conflict in history to make comprehensive use of stealth and space systems support capabilities against a modern, integrated air defense.
U.S. forces brought new weapons to the fight, including stealth aircraft, global positioning devices and precision guided technologies — these proved essential in neutralizing Iraq’s more than 700 combat aircraft, “state-of-the-art” air defenses, and anti-aircraft artillery pieces.
Coalition air, ground and naval forces were greatly aided and made more combat lethal due to employment of space technology such as weather satellites, US LANDSAT multi-spectral imagery satellites, GPS, early warning satellites, tactical receive equipment and related applications satellite broadcast, the Tactical Information Broadcast Service and communication satellites.
Space integration was vital to the coalition kill chain according the Air Force.
More than 60,830 Total Force Airmen were deployed in support of Desert Shield/Desert Storm, with more than 48,000 Reserve Airmen recalled to support home station requirements.