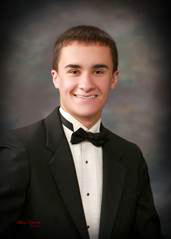 Congressman Kevin McCarthy, R-Calif., 23rd District, announced his nominations to the United States Service Academies Jan. 8.
One Desert High School student, Garron Ireton, received a Presidential nomination to the United States Air Force Academy in Colorado Springs, Colo. He was offered an appointment and accepted.
Though the number of presidential nominations available to children of career officer and enlisted personnel of the armed forces is unlimited, only 100 candidates may be appointed with these nominations each year.
For the past three years, Garron has earned awards at the Kern County Science Fair. He is a California Boys State Delegate and Antelope Valley Press Future Leader. He has served as the Air Force JROTC group commander and as squadron flight commander in Civil Air Patrol. After graduating from the USAFA, he hopes to become a fighter pilot and later a test pilot and astronaut.
The selection process for the United States Service Academies is competitive with many 23rd Congressional District high school students apply for consideration each year.
McCarthy designated one principal nominee for each academy that will fill one of five slots afforded to him as a member of Congress at each academy. He also nominated a slate of competing alternate nominations for each academy that will be ranked according to their competitiveness by the Academy Admission Board and selected for admission at the academy’s discretion.
Each candidate was interviewed by McCarthy’s Academy Interview Committee and the selections were submitted to the congressman. Among the 2015 Academy Committee members were Brig. Gen. Carl Schaefer, 412th Test Wing commander, and Cam Martin, NASA Armstrong Flight Research Center, External Affairs director.