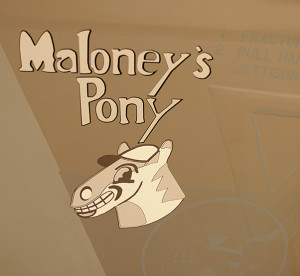 The Maloney’s Pony artwork is displayed on the body of an F-22 Raptor from Joint Base Langley-Eustis, Virginia. The artwork was painted on the Raptor in honor of Maj. Thomas E. Maloney, the 27th Fighter Squadron’s highest scoring Ace of World War II.The F-22 visited Edwards as part of the Signature Management Program, which is to maintain its stealth characteristics.

The 411th Flight Test Squadron got a first-hand look at a legend in June and November of 2015 when F-22 tail number 09-0174 “Maloney’s Pony” landed at Edwards.
The F-22 visited Edwards from Joint Base Langley-Eustis, Va., as part of the Signature Management Program, which is to maintain its stealth characteristics.
The story that accompanies the jet dates back to World War II and reflects the heroism of one pilot, Maj. Thomas E. Maloney, who flew with the 27th Fighter Squadron over 60 years ago.
Maj. David Schmitt, 411th Flight Test Squadron assistant director of operations, remembers the story of Maloney’s Pony well. From 2010 to 2014 he was assigned to the 27th Fighter Squadron, one of the oldest squadron’s in the Air Force.
“Tom Maloney was their leading ace of World War II so his story is something every wingman learns in the 27th,” recalled Schmitt. “If you were the leading ace, that really meant something — that you were really held in high esteem by everybody.”
It was August of 1944 and Maloney was flying a P-38 Lightening that he named “Maloney’s Pony” in France with others in his squadron. They were on their way back from a strike mission when they noticed a poorly-defended German train and decided to take advantage of the opportunity.
After several runs, Maloney hit a flatbed car that was loaded with military supplies including ammunition causing an explosion. The shrapnel that hit his aircraft caused engine damage and he crash-landed in the Mediterranean Sea. When the rescue efforts did not recover him, Maloney was presumed dead or captured.
But he was very much alive.
He floated to shore in the middle of the night and knew he would need to try to find the French Resistance to help him get back across the line. This became immensely challenging when he stepped on a landmine leaving him with massive injures.
“He treats his wounds as much as he can with his first aid kit. He can’t use his legs so he starts to crab walk up the beach to try to find somebody,” said Schmitt. “He knows he’s going to die if he just stays on the beach. He crawls for over a week, basically dragging himself on his back.”
For 10 days he lay helpless, crawling a little, eating a little, drinking from his canteen until the water was gone. Finally a French farmer found him.
After days of uncertainty, listening to languages he did not understand, he was greeted by an American doctor who reassured him that he would make it home safely.
Once he was stable enough to be transported, his squadron commander sent 12 P-38s to escort his C-54 flight home.
Maloney’s P-38 was the 23rd in the fleet. To honor him, then-Col. R.S. Richard, commander of the 1st Pursuit Group, ordered from that point forward any 27th FS aircraft bearing the number 23 would be known as Maloney’s Pony. According to Schmitt, as the system for numbering the fleet has changed, the insignia has been worn by others, such as the director of operations’ aircraft.
“When the squadron became a Raptor squadron, they did away with [Maloney’s Pony] because it’s a stealth aircraft, they didn’t want anything on the side of it so that tradition stopped,” Schmitt said.
The tradition of Maloney’s Pony proved to be as resilient as the man himself finding its way back to the squadron in 2011. Then-Lt. Col. Pete Fesler, 27th FS commander, reinstated the tradition and a mock-up of the nose art used in the World War II-era P-38 Lightning was applied to F-22 Raptor number 09-0174.
Following the legacy of the original Maloney’s Pony, F-22 number 174, was the flight lead for the first group of Raptors crossing the border into Syria in 2014.
“Maloney’s Pony was the first Raptor over the line in Syria, the first Raptor to ever go into combat,” said Schmitt.
“I’m a big supporter of keeping those traditions alive. There’s a lot of great history that sometimes gets lost in the wash … those types of oral traditions get lost if you don’t talk about them. We owe it to those guys who laid the path before us to make sure we’re remembering what they did.”