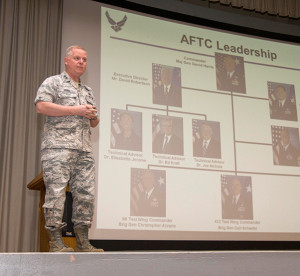 Maj. Gen. David Harris, Air Force Test Center commander, reminded Edwards personnel to be proud of what they do at the Jan. 14 commander’s call.
“It’s great to be at Edwards AFB, this is the closest thing to holy ground that there is in the United States military,” he said. “This is where so much history took place and this group, this ‘tribe’ I call us, within our Air Force is special.”
One change that is coming to the AFTC staff structure is the standing up of a small engineering directorate. They will be in charge of policy, professional development and helping the scientist and engineering community with career progression. It will also give the AFTC a strong voice in Air Force Materiel Command circles to advocate for AFTC scientists and engineers.
“All of the other centers in AFMC have an engineering directorate except for the test center, the place where engineering is at the heart of our organizational mission statement,” said Harris. “In order to be on an equal footing with them and in order, quite frankly, to serve the science and engineering workforce better, we’re standing up a small, a very small engineering directorate.”
Although not all of the annual award winners have been selected yet, Harris shared those individuals who have already won awards at the Air Force and Air Force Materiel Command level – a list which is already “long and distinguished.”
“This is our time, we’re ramping down as a nation from warfare. We’re getting ready for the next big fight – recapitalizing the fleet – setting up for that next off set strategy, the one that will outpace our peer competitors like Russia and China,” said Harris. “Without you, it doesn’t happen. Without you, we fight the last war and loose. Don’t forget it.”
The Air Force Test Center has been hard at work and Harris came prepared to show off some of the testing that’s been done around the center over the last year. At Arnold Air Force Base, Tenn., for example, the F-135 engine that is used in the F-35 is undergoing corrosion testing for the U.S. Navy. Their F-35s will be over the ocean for decades at a time and Arnold AFB has simulated decades of sea environment exposure in a matter of weeks.
At Eglin Air Force Base, Fla., the F-35 is undergoing a hot and cold weather testing series for extreme weather conditions.
Eglin and Edwards have developed the capability of controlling a test mission flown over the Pacific Ocean in real time, allowing resources to be used more effectively.
At Wright-Patterson Air Force Base, Ohio, the Air Force is able to simulate the runway surface of any runway in the Air Force for F-35 tire wear testing. And in Washington, members of the 418th Flight Test Squadron have been working out of Boeing Field on the new KC-46 tanker.
In addition to an opportunity to recognize the accomplishments of the AFTC and its members, the commander’s call was a chance to get to know the new center command chief, Chief Master Sgt. Christopher Lantagne.
“This is my first time in the test community,” confessed Lantagne.
In fact, in his 25 years in the Air Force, it’s his first time in Air Force Materiel Command. And until now, “the test world” is not something he had given much thought to. The reason that anyone would want to be a test pilot was not something he really understood until he arrived at Edwards.
“I’m seeing that nothing gets to the warfighter before you guys get your hands on it. You guys make sure that it’s safe and effective and that it’s doing what it’s supposed to do,” said Lantagne, encouraging everyone to be proud of what they do.
“We talk about Combat Air Force as being the tip of the spear. If they’re the tip of a spear, you guys are what sharpens the spear and that’s what you guys do day to day — you sharpen the spear and you’ve been doing it for years.”