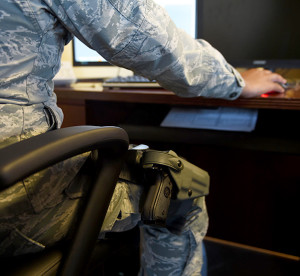 Air Force commanders can use the Unit Marshal and Security Forces Staff Arming programs along with the Law Enforcement Officer Safety Act to meet the needs of their installation. The Air Force Integrated Defense team is looking into how to authorize Air Force personnel assigned to duty at an off-installation center or facility to carry an appropriate firearm.

In response to tragic events that have taken place on and off installations over the past few years, Air Force commanders can take additional measures to secure personnel and property on their installations through three programs that allow service members to carry weapons.
The Air Force Security Forces Integrated Defense team established and implemented the Unit Marshal, Security Forces Staff Arming and Law Enforcement Officer Safety Act programs that will enable commanders the ability to increase his or her force protection measures on their installations.
“We looked at active-shooter incidents across the country and there are statistics out there that show where many ended without police intervention because there was somebody there who had a concealed carry permit or somebody interdicted the active shooter,” said Maj. Keith Quick, the Air Force Security Forces Integrated Defense action officer. “These programs allow commanders the ability to arm additional trained Airmen who could interdict before police arrive and are trained to stand down when police arrive.”
The Unit Marshal Program is the newest of these tools designed to enable commanders at every level, when approved by the installation commander, permission to work with security forces to train Airmen and allow them to open carry an M9 pistol in their duty location.
“We are calling it a subset of the security forces augmentee program,” Quick said. “The traditional augmentee program was established for security forces squadrons that didn’t have enough personnel to cover installation security and we would ask for personnel from other work centers across the base.”
Unlike the security forces augmentee program, the UMP allows a squadron commander who has a perceived threat to request additional security. Now a commander can train and arm Airmen in their unit that would remain at the squadron doing their primary job but also provide security for the location.
Members selected for the program will attend a training course that includes sections on use of force, weapons retention and weapons training.
“The goal of the UMP is to protect them, their immediate work space and the people within it,” Quick stressed. “They are not first responders, they are not to go to the sound of fire, they are not to chase bad guys. If an active shooter happened, these members are not authorized to engage unless confronted directly by the active shooter.”
The second program is the Security Forces Staff Arming program that would enable more security forces members who work in staff billets at the squadron, group, wing or major command to carry a government-issued weapon while on duty with the approval of the installation commander.
Any Air Force security force member who has the appropriate Air Force specialty code and is current on all of their qualifications may qualify with the goal of putting trained defenders in places around the base where they could immediately interdict an active shooter or some type of other threat. 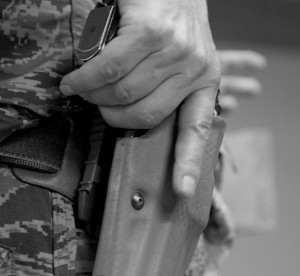 Air Force commanders can take additional measures to secure personnel and property on their installations through the Unit Marshal and Security Forces Staff Arming programs along with the Law Enforcement Officer Safety Act allow service members to carry weapons.

“If we can have a trained defender in the Base Exchange or commissary getting their lunch, or in the dry cleaners or library they can immediately interdict against an individual,” Quick said. “The goal is to have armed and trained service members carrying to respond if a need arises.”
The program that supports the Law Enforcement Officer Safety Act also applies to security forces members both past and present. LEOSA is a federal act that provides credentials for law enforcement members to carry a concealed weapon to any state for personal protection against people who may want to harm them, as long as they obey state and local laws pertaining to firearms.
“The theory was that throughout their career they were arresting criminals, putting them in jail and creating enemies, and while they are allowed to carry in their jurisdictions they may not be able to go to another state or city and still have that same right to carry and defend themselves,” Quick said.
However, the Air Force now allows its members to request LEOSA credentialing. There is a list of criteria that a security force member must meet. Active-duty Airmen can apply if they have the security forces AFSC, work a security forces position and maintain current weapons qualifications. If an Airman is in the Reserves, Guard or retired they must fulfill a minimum service requirement and still maintain weapons qualification through their state’s requirements.
“This affects base personnel because we have given the option to the installation commander to allow security forces members to carry under LEOSA on the installation while they are off duty,” Quick said. “With installation commander’s approval, I could go to the commissary on Saturday and stay armed and concealed while conducting my business on the installation and leave … it’s not for work purposes.”
Commanders can use these formalized programs at their discretion; the Air Force Integrated Defense team is also looking at how to authorize a member of the Air Force who is assigned to duty at off-installation, center or facility to carry an appropriate firearm.
“None of these programs gives the installation commander authorizations they didn’t already have the authorization to do,” Quick said. “We are now formalizing it and telling them how they can use these types of programs more effectively.”