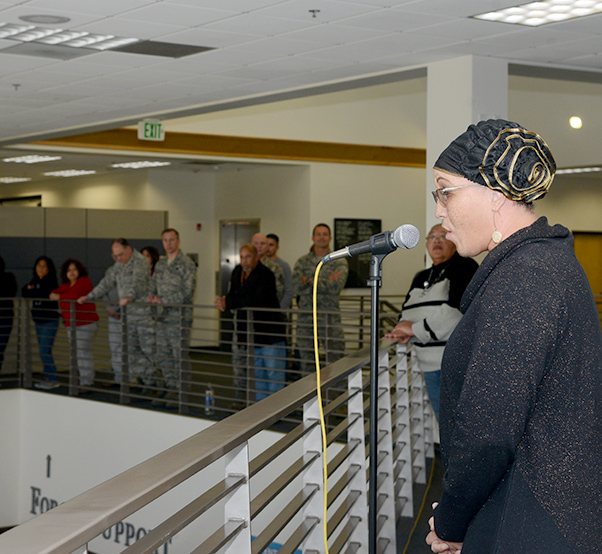 This year, to celebrate Martin Luther King Jr. Day, the chapel staff decided to try something new Jan. 15. Instead of a march or a chapel service, readers and vocalists took their places throughout the lobby of Bldg. 3000 and remembered many of the words that Reverend King once spoke.
“For many of us in the chapel, Reverend King is kind of a hero because he both was an ordained minister and he was an activist. For a lot of us it’s challenging to wear two different hats, but he seemed to do that well,” said Chaplain Maj. Jason Knudeson.
The reading started with Staff Sgt. Samantha Hull and Staff Sgt. Jasmine Wilson reading from King’s “Rediscovering Lost Values” written in 1954. Then from the other side of the room, Tech Sgt. Steve and Karen Eckles sang “Once to Every Man and Nation” and read King’s “The People are Important.” 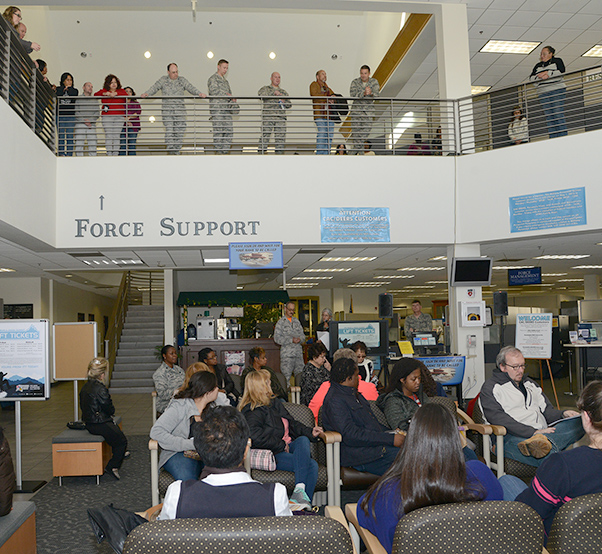 Chaplain Maj. Jason Knudeson and his wife Daryl read, “My People Listen … Our God is Marching On” to attendees at Bldg. 3000.

Then Dorinda Epps sang King’s favorite hymn, “Precious Lord” and Knudeson and his wife Daryl closed with, “My People Listen…Our God is Marching On.”
King, was a vital figure of the modern era and a pivotal figure in the Civil Rights Movement. His lectures and dialogues stirred the concern and sparked the conscience of a generation.
In 1954, upon completion of graduate studies at Boston University, he accepted a call to serve at the Dexter Avenue Baptist Church in Montgomery, Ala. While there, he was an instrumental leader in the Montgomery Bus Boycott, made famous by the nonviolent resistance and arrest of Rosa Parks. He resigned this position in 1959 to move back to Atlanta to direct the activities of the Southern Christian Leadership Conference. From 1960 until his death in 1968, he also served as co-pastor with his father at Ebenezer Baptist Church. 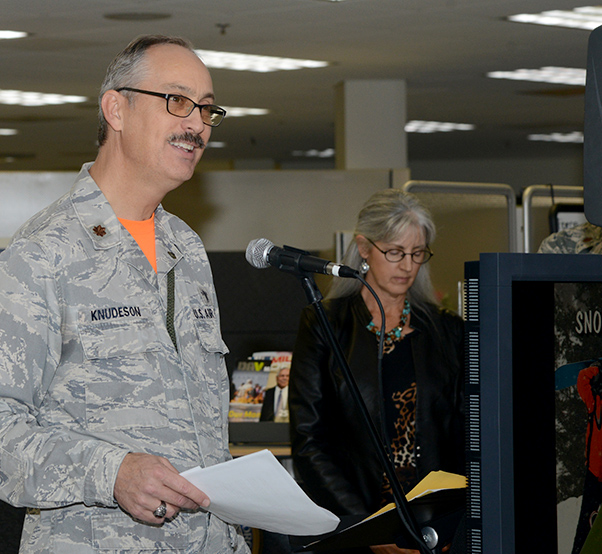 King was arrested 30 times for his participation in civil rights activities. While King preached about justice, empowerment, love and peace, in the final months of his life, his attention was turned to fighting poverty.
He was shot while standing on the balcony of the Lorraine Motel in Memphis, Tenn., and died on April 4, 1968. He had gone to Memphis to help lead sanitation workers in a protest against low wages and intolerable working conditions. 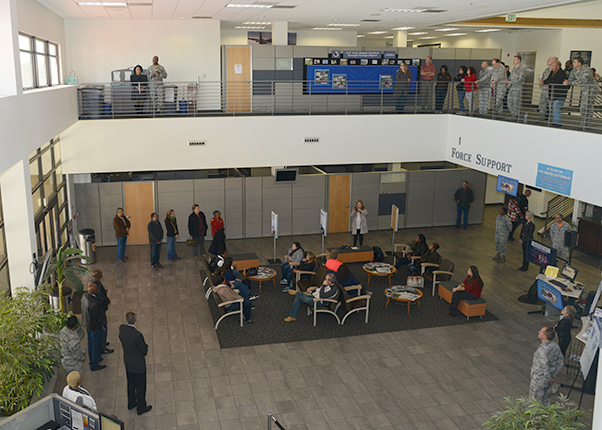 Tech Sgt. Steve and Karen Eckles sang “Once to Every Man and Nation” and read “The People are Important” during a Martin Luther King Jr. Day celebration Jan. 15 in Bldg. 3000.