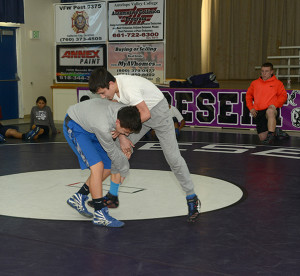 The Desert High Scorpions varsity wrestling team is able to compete for another year thanks to the volunteer efforts of this year’s six coaches.

Working and living on a military base, the people that make up the Edwards populace are no strangers to the frequent moving that accompanies military life.
The Desert High Scorpions varsity wrestling team found themselves in a pickle when their coaches received orders for a permanent change of station.
Two months into the season, the wrestling team is still able to compete because six servicemembers from the Air Force and U.S. Marine Corps volunteered to take over the coaching responsibilities.
Head coach, Lance Cpl. Brandon Masoni, VMX-22, is working with the team daily. He offers two hours of practice after school Monday through Friday with an additional optional hour available to anyone who wants to use it. Since the start of the season, almost every Saturday has been spent at tournaments. His assistant coaches fill in where they can according to their work schedules.
The other coaches are Senior Airman Erik Gilbertson, 412th Security Forces Squadron; Senior Airman Brandon Rogers, 31st Test and Evaluation Squadron; Pfc. Adam Pendleton and Lance Cpl. Ryan Salazar, VMX-22; and Staff Sgt. Eli Rodriguez, 912th Aircraft Maintenance Squadron.
“This is my first year coaching, so coming into it I had no idea who any of these kids were, but getting into it I got to know them pretty quickly,” said Masoni. “Overall, they all will leave everything on the mat. They will all try their 100% and that’s all I ask for.”
The team is currently preparing for the league finals Jan. 30.
So far, the season has gone well for the Scorpions with wrestlers placing at almost every tournament. Since the team is freelance, they have to participate in a minimum of 20 matches to qualify for participation in the league finals.
“If they don’t make weight for a tournament, they might not make match count,” said Masoni explaining that the team constantly has to be working towards their goals. 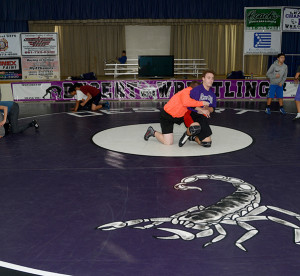 The Desert High Scorpions varsity wrestling team prepares for their league finals Jan. 30. Practices are held in the Center of Excellence.

As an experienced wrestler himself, Masoni believes that technique is one of the easiest things to teach his team. The reason he chose to coach was not even to teach wrestling, it was to teach them how to “put out their full effort.”
“It’s not the success that makes you who you are, it’s about your desire to succeed which will eventually lead to success,” he said.
This year’s team is more than half freshmen, with 11 boys and one girl.
Azilre Santos, grade 12, is the team’s female wrestler. She competes in the 103-pound weight class though she’s only 92 pounds. Masoni says that in spite of her 10 lb weight difference, she “doesn’t give up.”
On the weekend of Jan. 23, she will have the opportunity to compete in an all-female tournament.
Santos joined the team last year because her father had taught her how to box and wrestling was the closest thing to that at Desert High. In the beginning she felt at little intimidated, but after getting to know the team, she found that “they’re really cool.”
“It does get hard, but I just love the sport,” said Santos.
Lorenzo Brino, grade 11 “probably has the best record right now” with more than 20 wins this season according to his coach.
“He’s very intense, he has a lot of heart and he does not give up,” recognized Masoni.
Lorenzo is a third year wrestler with hopes to wrestle in college.
“I love being a part of it. We’ve got a lot of new kids and I feel like the coaches have really built up the program from day one. You’ve got to give it all to them, because without these guys coming out here, we wouldn’t even have a program.”
The wrestling team is one of the unfunded sports programs at Desert High School. Instead of letting the program die when funding was cut several years ago, the parents formed a booster club and started fundraising efforts and recruiting sponsors.
Booster club president, Elvin Colindres, said the program costs around $5,000 a year with the biggest expenses being tournament fees and transportation.
“There are very few things in life that are better than when you recognize all the hard work that you put in, all the sacrifice you put in pay off,” said Masoni. “When they win matches, and in the end they come out on top because of all the hard work they’ve done – they love it and you can see it even if they try to hide it.”