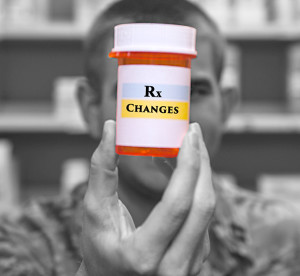 TRICARE’s over-the-counter drug coverage is here to stay. Formerly a demonstration program, the OTC benefit becomes a permanent part of the TRICARE pharmacy benefit Feb. 1, 2016.
Effective that date, TRICARE is making some changes to OTC coverage to bring it in line with other TRICARE pharmacy coverage.
Starting Feb. 1, beneficiaries must pay the usual generic copays for covered OTC drugs. OTC drug coverage will still require a prescription from their doctor. Female beneficiaries can still get Levonorgestrel (the Plan B one-step emergency contraceptive), without a copay or prescription at a network or military pharmacy.
Feb. 1 also brings a change to which drugs are available under the OTC benefit. The allergy medications Cetirizine and Loratadine were previously covered, but now the versions that contain pseudoephedrine are also covered. However, brand name Prilosec OTC is no longer covered. The generic version, Omeprazole, is still covered, as is the prescription version of Prilosec.
Visit http://tricare.mil/CoveredServices/Pharmacy.aspx for more information on the TRICARE pharmacy benefit. If you have questions about whether or not one of your drugs is covered, you can always call the TRICARE pharmacy contractor, Express Scripts, at 877-363-1303.