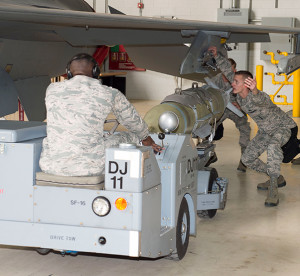 Members of the 416th Aircraft Maintenance Unit Weapons Load crew prepare to mount a GBU-31 guided bomb onto a fighter during the quarterly load competition in January, which they won. The 412th Maintenance Group will hold its annual Load Crew of the Year Competition for 2015 Feb. 19.

The ability to safely and rapidly load weapons on an aircraft is critical in combat situations.
The specific function of a weapons load crew is to load their aircraft in the most expeditious and safest method possible while ensuring the reliability of the munitions.
To hone these skills, 412th Maintenance Group Weapons Standardization evaluators provide academic and practical hands-on training to each load crew on a monthly basis. Each evaluator will ensure that load crews can consistently upload weapons safely, reliably and within a set time standard. Typically, the most proficient load crews will post the fastest load time while accumulating the fewest discrepancies and no safety or reliability errors.
On Feb. 19, Col. Robert Lepper Jr., 412th MXG commander, will host the Annual Load Crew of the Year Competition for 2015.
The best load crews on Edwards will compete to determine which crew will emerge as the “Best in Test.” This competition will include two fifth-generation fighters, the F-35 Joint Strike Fighter and the F-22 Raptor, competing head-to-head against the legacy generation F-16 Fighting Falcon.
The competition will begin with a written examination of each crew member’s general weapons loading knowledge. This will measure how much academic knowledge individual crew members have accumulated through their years, or months, of training.
Next, each crew will receive a dress and appearance inspection from AFI 36-2903.
This is where the load crew demonstrates their level of professionalism through their projection of the Air Force image. After the uniform inspection, each composite tool kit used by the load crews during competition will be inspected. Though most CTKs are different, they must still be in compliance with Air Force regulations and kept in clean and serviceable condition.
During the competition each crew will load one AIM-9X missile, a CATM-120 missile and a GBU-31 or -32 guided bomb while evaluators scrutinize the crews on their performance. The load crew to commit the fewest discrepancies with no safety or reliability errors within, or under, the allotted time will emerge victorious.
Competing for the 411th Aircraft Maintenance Unit on the F-22 will be crew R-1 consisting of Staff Sgt. James Bozley, Senior Airman Kyla Hayes and Senior Airman Michael Meyer.
Competing for the 461st Aircraft Maintenance Unit on the F-35 will be crew DT-2 with Staff Sgt. Devon Carroll, Staff Sgt. Ryan Mabbitt and Senior Airman Jessica Meehan.
Competing for the 416th Aircraft Maintenance Unit, and the defending quarterly champions, will be Staff Sgt. Richard Wadkins, Senior Airman Collin Mortensen and Airman 1st Class Mackie Myers.
The competition is 10 a.m., Feb. 19 at Hangar 1600. Everyone is invited to watch these load crews face off in a Wild West “Loadeo.”
Parking areas will be available on the west and northwest sides of Bldg. 1600. If you have any questions, call 661-277-6934.
Come on out and observe as we demonstrate how weapons loaders sharpen the tip of the spear and ensure the combat readiness of our nation.