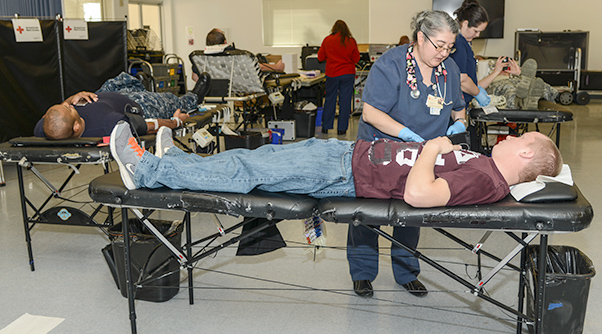 Airman 1st Class Joshua Foster, 412th Force Support Squadron, went to the Chapel 1 Annex Feb. 3 to donate blood in the largest blood drive of the year – the Battle of the Badges.

Team Edwards found another way to save lives Feb. 3 at the 10th Annual Battle of the Badges blood drive.
Battle of the Badges is an annual Red Cross donation competition for all law enforcement and military agencies across Southern California to see who can bring in the most blood.
For Edwards, the competition is the biggest of the year and has consistently brought in substantial donations. The base first started participating in Battle of the Badges in 2012.
“So far Edwards is still number one and we hope to keep it that way,” said Nadia Mills, Antelope Valley Red Cross account manager.
Awards are given in several categories including “Most Presented” and “Highest Collector.” The award for Highest Collector goes to the team that collects the most pints of blood, which the Red Cross refers to as “units” of blood. The Most Presented goes to the organization that brings in the highest number of people to register to donate that day. Since not every person who registers is able to donate, the award recognizes their efforts to get people in the door.
Last year Edwards won most units collected for a military installation and the highest presentation of donors for a military installation, according to Mills. Some units were collected during the January blood drive. Battle of the Badges runs during January and February, but at Edwards the February drive is promoted for the competition.
Senior Airman Joe Hernandez has been volunteering for the blood drive for the last three years in addition to donating.
“I actually had an experience about four-and-a-half years ago where a very close family member of mine needed a blood transfusion and it took a long time for the blood to actually get to them,” said Hernandez.
That’s when he decided to start donating. 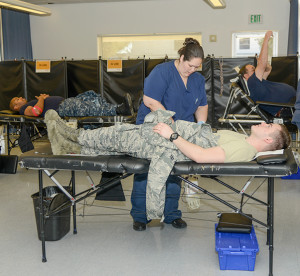 Airman 1st Class Cameron Fuller, 412th Aerospace Medicine Squadron, could save up to three lives with his donation at the Battle of the Badges blood drive Feb. 3 at the Chapel 1 Annex.

“I love it,  love the environment. The nurses here are great, the volunteers that come in from the squadrons and all the donors that come in — it makes it a really good experience,” he said.
According to Hernandez, once blood is donated, it’s used within two weeks. It’s also tracked so that donors can receive an email that says when the blood was used and at what hospital. And, each donation can save up to three lives.
This year, Hernandez is especially excited about the new Red Cross app that allows members to schedule appointments so that when they arrive they go straight to the front of the line.
“Here in SoCal we’re at an all-time low,” said Mills. “Blood is not manufactured, we cannot go to a lab and say, ‘Hey, will you make blood for us just like any type of medication or pills?’ We can only get it from people donating it.”
After the blood is collected it is separated into three parts, red cells, platelets and plasma. Each component of the blood may be needed by a different patient, allowing the donor to save up to three lives with each unit of blood.
The whole process takes an average of about 45 minutes. The actual donation only takes about five to 10 minutes, the rest of the time is used to conduct a mini physical and fill out registration forms.
Mills organizes blood drives throughout most of the Antelope Valley, Edwards AFB and as far as Boron, California. She estimates that those blood drives bring in around 7,000 to 9,000 units of blood annually. A large portion of that blood supply comes from regular donors who donate faithfully every two months, which is the required wait time for repeat donors.
According to Mills, the blood only has a shelf-life of about 42 days, but the blood they collect is never wasted because it never stays on the shelf that long.
Donors can give every 56 days. To help facilitate donations, Edwards AFB holds a blood drive every first Wednesday of the month at the Chapel 1 Annex.