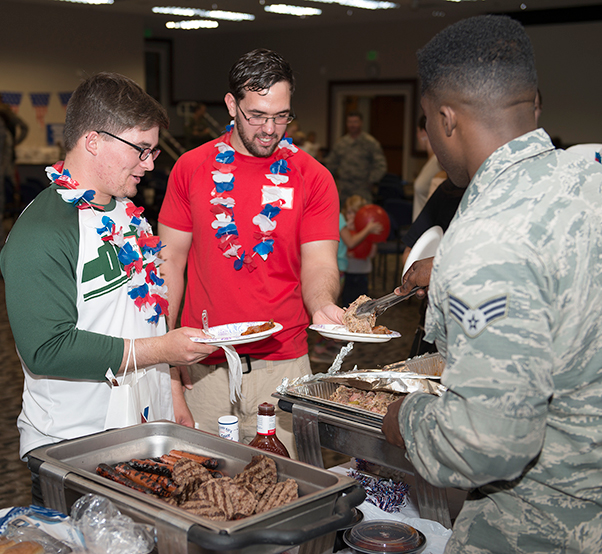 A “No sauce needed BBQ” dinner was served at the Deployment Welcome Home event at the Airman and Family Readiness Center Feb. 17.

From June to December of 2015, more than 150 service members stationed at Edwards were deployed. On Feb. 17, at the Airman and Family Readiness Center, those Airmen were thanked for their service at a Deployment Welcome Home event.
The event was held in conjunction with Hearts Apart as an opportunity for base leadership to thank the service members and their families. A barbecue dinner was cooked by No Sauce Needed BBQ with homemade side dishes provided by the Key Spouses. A volunteer photographer offered free family portraits and the Exchange handed out gift bags to show their appreciation.
“October of 2001 (the year of the 9/11 attacks) I think there were more American flags flying than at any other point in our history. Everyone was very patriotic in supporting the military and I think some of the American public forgets the fact that we still have people deploying for six months at a time supporting overseas operations,” said Master Sgt. Damian Spaits, AFRC Readiness NCO. 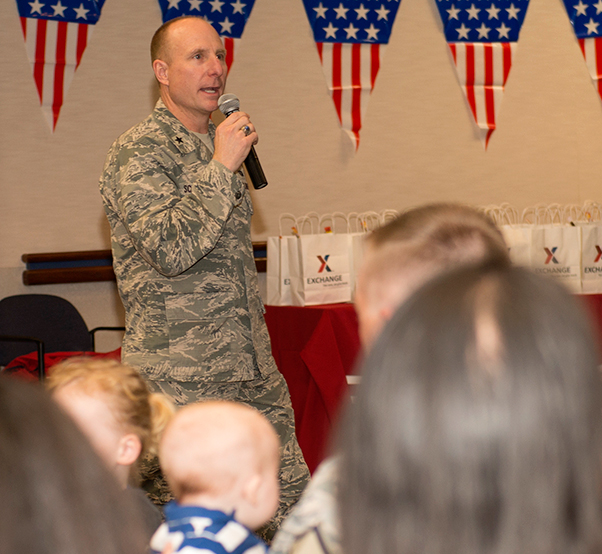 The deployed service members were stationed at various locations: Afghanistan, Djibouti, Kuwait, Qatar, Saudi Arabia and the United Arab Emirates.
“If they’re in Afghanistan and they see combat action, or if they’re in a less dangerous location, they’re still separated from their families,” noted Spaits. “It’s important that we continuously thank them for the sacrifices that they make.”
Spaits shared that in 2015 Air Force Central Command completed 25,789 combat sorties delivering 29,661 weapons on target. They also completed over 30,000 intelligence, surveillance and reconnaissance sorties, more than 20,000 tanker sorties and nearly 17,000 airlift and airdrop sorties. While the Edwards deployed members were only gone for half of the year, they supported either directly or indirectly on many of those missions.
Now the AFRC is preparing to host a deployment farewell event March 17. The event will be more of an information fair with helping agencies from around base present to answer military member and spouse questions.
“Then we’ll be back into the monthly battle rhythm of more Hearts Apart events.” 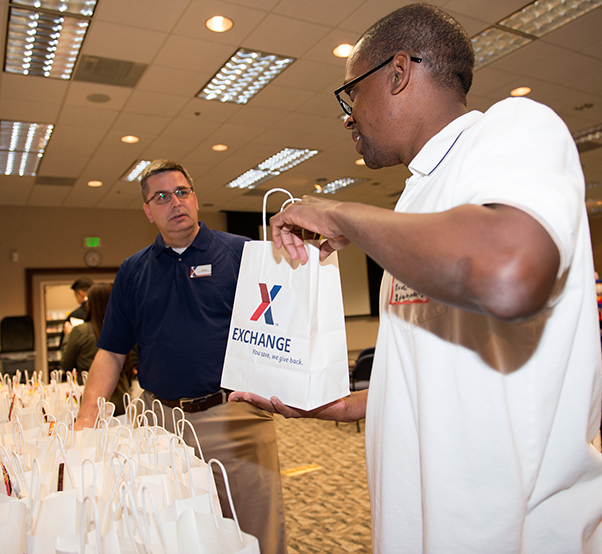 The Exchange handed out gift bags to service members and their spouses during the Deployed Welcome Home event to show their appreciation.