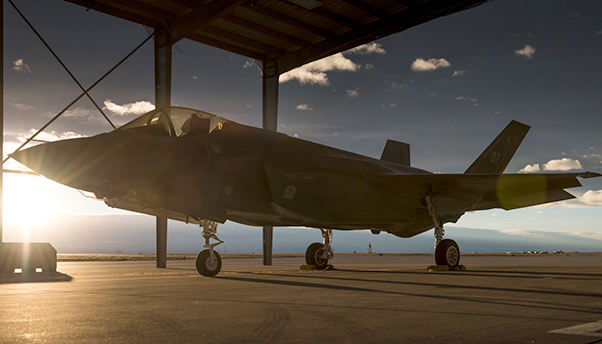 An F-35A parks for the night under the sunshades at Mountain Home Air Force Base, Idaho, Feb. 18, 2016. The F-35s are testing their combat capabilities through an operational deployment test at Mountain Home AFB range complexes.

Six F-35As arrived at Mountain Home AFB, Idaho, Feb. 8, 2016, from Edwards AFB, Calif., to begin an operational deployment test at a nearby range complex. The test will help develop the concept of operations as well as validate the aircraft’s capability to deploy.
In order for the U.S. Air Force to declare initial operating capability for the F-35A, the aircraft must be able to execute three key mission sets: suppression and destruction of enemy air defense, air interdiction missions, as well as conduct basic close air support – to include alert launches. Each of these functions will be executed in a limited capacity to measure the effectiveness of the weapons system in line with the IOC progress. The deployment test is designed not only to identify capabilities, but also any limitations the aircraft may have.
As a 5th generation multirole fighter with electronic warfare and multi-spectral fused sensor capabilities, the F-35 is designed to be comparable to current tactical fighters in terms of maneuverability, but optimized for stealth. Mountain Home AFB offers the perfect environment and integration experiences to test the aircraft’s abilities, forming the foundation for deployed F-35 operations.
“Mountain Home offers excellent integration opportunities with F-15E and A-10 aircraft,” said Maj. Christopher White, F-35 project manager with the 31st Test Evaluation Squadron from Edwards AFB. “This, combined with outstanding airspace capable of providing F-35s with a robust threat laydown, makes Mountain Home AFB the ideal location to assess the F-35’s ability to operate while deployed.” 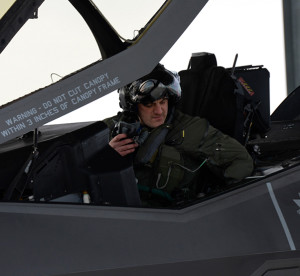 Maj. Ethan Sabin, 31st Test and Evaluation Squadron assistant director of operations, settles into the cockpit of an F-35A at Mountain Home Air Force Base, Idaho, Feb. 12, 2016. Sabin is assigned to the 31st TES from Edwards AFB, Calif., which is part of the 53rd Wing headquartered at Eglin AFB, Fla.

While here, the F-35s are scheduled to fly approximately four sorties a day with their 4th generation counterparts, dropping 20-30 inert weapons during multiple training scenarios throughout the test.
“Mountain Home is great because the ranges and airspace here allow us to drop weapons and fly sorties at rates we can’t back home,” said Maj. Colin Marshall, chief of Standardization and Evaluation, also with the 31st TES. “It’s fun to find a target by talking to ground controllers, drop a bomb on that target, and then watch an A-10 roll in and strafe it, all while an F-15E orbits supersonic above and prepares for the next attack.”
With innovative capabilities, the 5th generation F-35 is able to meet security needs for the U.S. and provide the warfighter unprecedented situational awareness and the required survivability to fight and win in highly-contested environments.
“The F-35 is the future of the Air Force fighter inventory,” Marshall said, “Fifteen to 20 years from now it will make up the vast majority of our fighter force so it’s important that we wring it out as much as we can now so that it can be the best jet possible when our kids are flying it.”
Unlike the 4th generation aircraft, the F-35 uses multiple sensor fusion and integrated avionics to give pilots the ability to quickly and fully understand the environment through a 360-degree view of the battlespace.

Two airmen remove the chalks from an F-35A preparing for departure from Mountain Home Air Force Base, Idaho, Feb. 12, 2016. The F-35 is a 5th generation multi-role fighter with stealth, electronic warfare and multi-spectral fused sensor capabilities needed to achieve unmatched levels of survivability and lethality in a contested environment.

Designed with the entire battlespace in mind, the aircraft is the most flexible and technologically sophisticated multirole fighter built to this day, with advanced stealth, speed and agility, fully-fused sensor information, network-enabled operations and advanced sustainment.
By validating the aircraft’s proficiencies during this deployment test, policy makers will be able to make informed decisions about the readiness of the F-35A toward IOC. More importantly, White explained, these tests ensure our brothers and sisters make it home safely from their missions.
As the largest Department of Defense acquisition program in history, the thorough testing of the aircraft and its supporting infrastructure is immensely important, White explained.
“With the massive investment and planned longevity of this program, it’s entirely possible that our sons and daughters will fly the [Joint Strike Fighter] in future wars. Simply put, we have to get this right,” he said.
So far the testing is going better than expected; the results have been very satisfying from a test and pilot perspective, Marshall said. With a few lessons already learned, the pilot hopes to continue to have successes during the deployment test.

An F-35A ascends into take-off at Mountain Home Air Force Base, Idaho, Feb. 12, 2016. The aircraft is here to execute key mission capabilities as part of a deployment test.

Two F-35As begin their take-off from Mountain Home Air Force Base, Idaho, Feb. 18, 2016. Six F-35s are here to begin an operational deployment test at the nearby range complex. 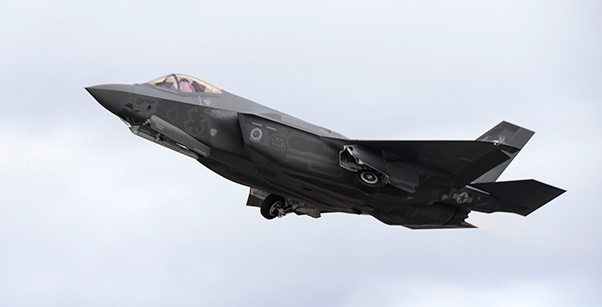 An F-35A soars above the runway at Mountain Home Air Force Base, Idaho, Feb. 18, 2016. While here, the F-35s are scheduled to fly approximately four sorties a day with their 4th generation counterparts, dropping 20-30 inert weapons during multiple training scenarios throughout the test.