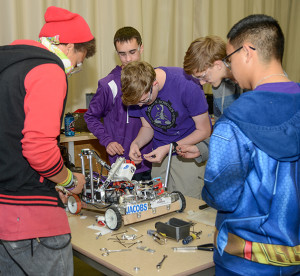 Desert Jr.-Sr. High School robotics team, #7227 Scorpion Robotics, is heading to the L.A. Regional Robotics Championship Tournament Feb. 27 in Monrovia, California.
Since the Desert Robotics club was founded three years ago, it’s grown to include 22 students, 10 coaches and three teams. Team #7227 Scorpion Robotics is the original team and was joined in the second year by team #9074 Scorpiobotics. This year a third team was established, #10187 The Heralds of the Sea.
All of the teams participate in what is known as FIRST Tech Challenge, which is For Inspiration and Recognition of Science and Technology.
Each year at the start of the season, a new “game” is released to all the teams. This year’s game is called FIRST Res-Q. Students work together to design, build and program their robot using sound engineering principles. At competitions, they compete in an alliance format against other teams. The teams compete in two qualifying tournaments and must qualify at one of those tournaments to advance to regionals.
According to this year’s coaches, the game this time around was much harder than in previous years requiring the students to be even more creative in creating a robot that could score points. Meanwhile, the teams transitioned to new technology to control their robots this year.
Last year, the teams used laptops and a router to control the systems over Wi-fi. Now they’ve moved to an Android system and two phones.
“They still need a laptop to do all the programming, but then you use two phones. [One] phone becomes basically like a flight computer that runs the robot and the second phone is what they use to control the robot,” explained coach Anthony Gore, 412th Test Engineering Group.
The end result is a more powerful system that keeps their learning more relevant. The students even had to program part of an app to get their robots moving.
Last year teams #7227 and #9074 wrote letters asking for grants to purchase 3D printers. Both were awarded grants and each received a printer that can be used to print 3D parts for their robots.
But it’s not all about technology in the robotics club. 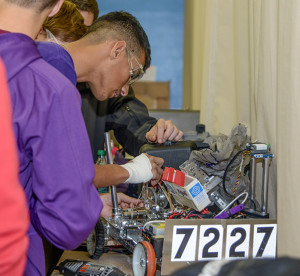 Joseph Santiago, grade 12, is in his second year on team #7227 Scorpion Robotics. Feb. 23 he worked with his team on the robot, which will participate in the L.A. Regional Championship Tournament Feb. 27 in Monrovia, Calif.

They learn to work in teams and exhibit gracious professionalism. For instance, in their first year, team #7227 Scorpion Robotics showed up at a competition without a part they needed and another team let them borrow what they needed for the competition. This year, another school’s team found themselves without a critical item at a competition. Rather than watching that team forfeit, the Desert High School teams lent a helping hand.
One coach noted that the teams still forget things, but they’ve learned what it’s like to show up at a competition unprepared and see another team show compassion to create a fair competition.
“They learn a lot of skills that they don’t learn otherwise; technical skills and also just team building skills,” said coach Michael Perron, 416th Flight Test Squadron. “And also just simple things like using a wrench and a screwdriver.”
Joseph Santiago, grade 12, is in his second year on the team. Next year when he goes off to college he will consider studying engineering, something he had not thought about prior to joining the team.
“I never really understood how much I liked seeing things go together in an electrical and mechanical sense,” said Joseph. “I’ve learned how to think outside the box while also using other team member’s ideas, not just going off of my own.”
Caroline Deojay, grade 9, wants to be a computer programmer someday. Not only did joining the Scorpion Robotics team give her a chance to practice her programming skills, it was an opportunity to make new friends.
“When I moved here I didn’t really have a lot of friends and I’d always been interested in engineering and I just leaned towards robotics,” recalled Caroline. 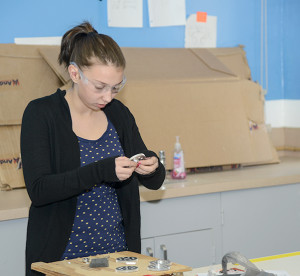 Now she’s learning all kinds of new things like how center of gravity and torque work.
All of the coaches encourage students who are interested in joining next year’s robotics teams to come try it out.
“If they come there day one, that fire’s there. If I get them there day two, they’re hooked,” said Gore.
The coaches don’t run the team alone. They have a team of mentors who volunteer faithfully at each practice. The Desert Robotics teams are always looking for additional mentors and new or used hand and power tools. For more information about the Desert Robotics teams, or to donate tools email scorpion-robotics@googlegroups.com.