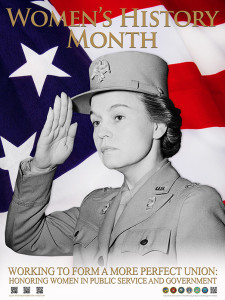 During the month of March, the country celebrates Women’s History Month.

For calendar year 2016, the theme selected by the government and Department of Defense is “Working to Perform a More Perfect Union: Honoring Women in Public Service and Government.”

During March we honor the women who have shaped America’s history and its future through their public service and government leadership.

Accounts of the lives of individual women are critically important because they reveal exceptionally strong role models who share a more expansive vision of what a woman can do. The stories of women’s lives, and the choices they made, encourage girls and young women to think larger and bolder, and give boys and men a fuller understanding of the female experience. The knowledge of women’s achievements challenges stereotypes and upends social assumptions about who women are and what women can accomplish today.

A few facts about women’s history are below for your enrichment and understanding. Each week new facts will be identified and shared. To gain further understanding of the impact these women had in history, follow the a link.

1. In 2012, Janet C. Wolfenbarger became the first female four-star general in the U.S. Air Force. After receiving her fourth star, she became the commander of Air Force Material Command. She had previously served as military deputy in the Office of the Assistant Secretary of the Air Force for Acquisition at the Pentagon, where she oversaw research and development, testing, production and modernization of an annual $40 billion in Air Force programs.

2. Clara Louise Maass volunteered to serve as a contract nurse during the Spanish American War in 1898. After the end of the war, she participated in an experimental program in Cuba to determine the cause of yellow fever. During her time researching and caring for the sick, she became infected and died.

3. Grace Hopper joined the Naval Reserve during World War I and continued to work for the Navy as a reservist. In 1952, the computer programming pioneer developed a program that translated programming language into machine-readable code; the first step in the creation of the universal programming language, COBOL. She served for 30 years and was later honored posthumously with the christening of the USS Hopper in 1996.

4. Tulsi Gabbard was born in American Samoa in 1981 and moved to Hawaii at age two. When she was sworn in as a congresswoman in 2013, Gabbard became one of the first two female combat veterans, the first Hindu, and the first woman of Samoan ancestry to serve as a member of the U.S. Congress. In 2003, she joined the Hawaii National Guard and volunteered to deploy to Iraq. Gabbard continues to serve in the Hawaii National Guard’s 29th Brigade Combat Team.

6.  In 1933, Frances Perkins was appointed secretary of labor under President Franklin D. Roosevelt, making her the first female cabinet member in the United States. She held the position for 12 years, longer than anyone had before her. After serving as secretary of labor, Perkins served on the U.S. Civil Service Commission under President Truman until 1952. After leaving her government service career, she spent the rest of her life teaching and lecturing. She died in 1965.