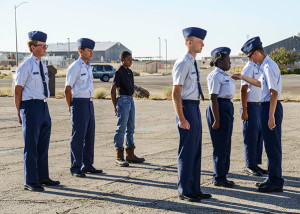 According to Capt. Kevin Finster, squadron commander, the entire community is welcome to attend and learn more about CAP. Members of the squadron will be present to greet visitors and share information on CAP’s three missions: Aerospace Education, Cadet Programs and Emergency Services.

CAP was founded Dec. 1, 1941, and the Edwards AFB Civil Air Patrol Squadron 84 is hosting the open house as part of the 75th anniversary observance designed to create a greater awareness of CAP’s presence and contributions in the community.

Anyone requesting further information on the squadron or open house may contact Capt. Kevin Finster at Kevin.Finster@cawgcap.org or Capt. Gail Harper at Gailmary.Harper@cawgcap.org, the squadron public affairs officer.

Civil Air Patrol, the longtime all-volunteer U.S. Air Force auxiliary, is the newest member of the Air Force’s Total Force, which consists of regular Air Force, Air National Guard and Air Force Reserve, along with the Air Force retired military and civilian employees. CAP, in its Total Force role, operates a fleet of 550 aircraft and performs about 90 percent of continental U.S. inland search and rescue missions as tasked by the Air Force Rescue Coordination Center and is credited by the AFRCC with saving an average of 78 lives annually.

Civil Air patrol’s 56,000 members nationwide also perform homeland security, disaster relief and drug interdiction missions at the request of federal, state and local agencies. Its members additionally play a leading role in aerospace education and serve as mentors to more than 24,000 young people currently participating in the CAP cadet program. Performing missions for America for the past 75 years, CAP received the Congressional Gold Medal in 2014 in honor of the heroic efforts of its World War II veterans.

CAP also participates in Wreaths Across America, an initiative to remember, honor and teach about the sacrifices of U.S. military veterans.
For more information, visit www.capvolunteernow.com.