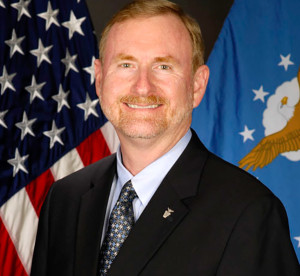 What began as uncertainty toward the possibility of an Air Force career transformed into a 34-year commitment for Air Force Materiel Command Executive Director Michael A. Gill, who retires April 1 after spending three years in the command’s top civilian post.

“We all talk about retirement, but you don’t realize just how quickly the time goes,” Gill said. “I can’t believe I’ve gotten to the end because I enjoyed the ride so much.”

More than three decades ago, the prospect of an Air Force job was not foremost in the mind of a college-aged Gill, who grew up near Robins Air Force Base, Ga., watching F-15s fly overhead and living with his mother who also had a successful Air Force career.

A stint in the Robins contracting office changed that mindset, however, and introduced Gill to a career field he said he equated with being a good steward of taxpayer dollars.

“Both my parents had worked for the Air Force and I had a comfort level and I knew the mission,” he said. “It just seemed like the right fit.”

That opportunity set the course for a diverse career that would eventually include three assignments at Headquarters AFMC and jobs at three different bases in the command. As executive director, Gill now advises the AFMC commander in managing all aspects of the command’s mission, in addition to advising her on labor union relations and development of the civilian work force.

Gill’s most recent tenure here began as AFMC reached full operational capability of the then-newly established five-center construct. It was that climate of transition and focus on efficiency that would lay a foundation for what Gill regards as accomplishments on the job.

“I take a lot of pride in being a part of the planning, the implementation and the latter part of the five-center — and now six-center — construct,” Gill said.

Similarly, he pointed to a collaboration with small business that yielded “incredible” results within the command and the services portfolio he manages. This, Gill said, was yet another example of the command’s commitment to efficiency and small business.

“The command has exceeded its small business goals the last two years, and that’s the first time we’ve done that,” he said. “I think together we’ve broken the code on how we can best leverage our small business community.”

Gill also cites as a success the partnership between AFMC and American Federation of Government Employees Council 214, which has brought the Voluntary Protection Program, flexible work schedules and fitness programs to the command’s largely civilian workforce.

“I consider that a success from the standpoint that I think we’ve done some things with the partnership that highlight what good we can do for our people while supporting the mission — and that really is the ultimate goal,” Gill said.

That partnership has also most recently included work related to the command’s transition to Acquisition Demonstration, a personnel system that Gill said will “give more latitude over personnel processes related to assigning and moving employees and compensating them for their contributions.”

With these accomplishments now nearly a part of his career past, Gill said that his post-AFMC plans are gradually becoming clearer. While not all of those plans are solidified, Gill is quick to point out where his attention will be re-directed.

“Family, friends, hobbies and probably doing some things my schedule just doesn’t permit me to do today,” he said.

When reflecting on career highlights, Gill said that successes are memorable but the team dynamics and relationships that accompany them are unforgettable.

“I will have a lot of fond memories of all the great things we’ve done,” Gill said, “Of it all, though, I will miss the camaraderie of what comes with being a member of the Air Force family … because it is a family.”