Volunteer yoga instructor, Melissa Hoffmann, offers four yoga classes at no cost to the base community every week in the Chapel 1 Annex.

When her instructor needed a substitute teacher, Hoffmann loved yoga so much she took the classes to be certified as an instructor and eventually took over the class. Today, she offers four classes every week in the Chapel 1 Annex.

The class is free to anyone who wishes to attend, ages 13 and up.

“It was always free when it was over at the aerobics center,” said Hoffmann. “When they had to cut the classes over there because of funding, I wanted to keep teaching it and I didn’t want people to have to pay.”

Her class is geared towards beginner and intermediate level yoga, but more advanced students are also welcome. According to Hoffmann, yoga is a stress reliever and can help with physical ailments such as back problems.

One of her students, Cleo Goss, a retired computer scientist at the 412th Electronic Warfare Group, has broken her back twice. Goss had already been doing yoga for several years before she broke her back in 2007. The doctor said he would allow her to continue taking yoga classes and Goss believes it’s the only thing that kept her going. Her second back injury occurred only three years later.

“When I’m at home doing something for a long time I get up and do yoga. It’s the only way I can go to sleep when I’m in a lot of pain,” said Goss.
Goss has had 12 major surgeries and 10 minor ones. She uses only yoga and ice to manage the pain.

“That’s why I drive 45 minutes out of my way to remember Melissa’s teachings,” she said.

According to Hoffmann, yoga is also good for post-traumatic stress disorder and pregnancy. She keeps extra yoga mats in the class for newcomers who want to try it out for the first time. 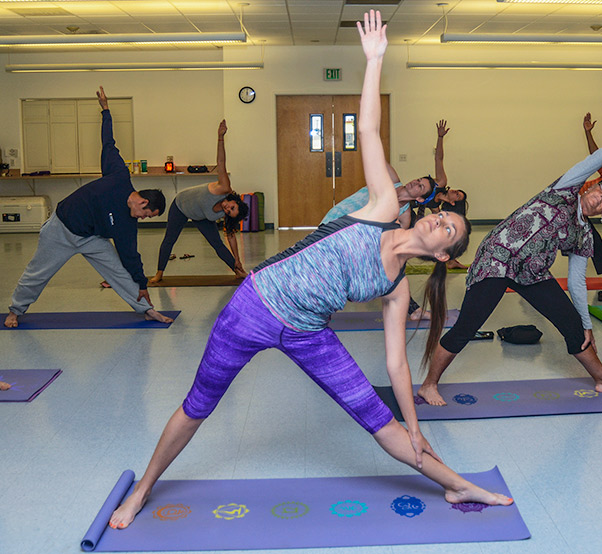 Yoga classes are offered in the Chapel 1 Annex to anyone with base access. Instructor Melissa Hoffmann offers the classes to help her students relieve stress and build muscle.

“I think everyone should try it a couple of times. It’s different than other aerobics classes – it’s really slow and I talk kind of monotone and the music is really relaxing.”

Hoffmann’s mother, Mary also takes her classes. Mary has never been a runner, but after taking yoga classes, she has completed four half-marathons.
“I absolutely love it. Because of yoga, I actually did my first half marathon on Father’s Day 2013,” said Mary. “Melissa can never stop teaching yoga — we won’t let her.”

According to Hoffmann, yoga is a good workout and everyone improves over time. At the end of each class, Hoffmann asks her students to find their “happy place.” For some that might be on the beach, for others skiing or a light stroll. The idea is for each student to visualize a place that they find relaxing and forget about the things that cause them stress.

“It’s mentally relaxing and it’s trying to sync up mind and body,” said Hoffmann. “You work out, you stretch everything, you clear your mind and you’re happy when you go back to work.”

Classes are offered noon-1 p.m., Monday, Wednesday and Friday, and 4:30-5:30 p.m. All classes are in the Chapel 1 Annex. For more information, or for yoga class schedules, email Hoffmann at melissa.l.hoffmann@nasa.gov.