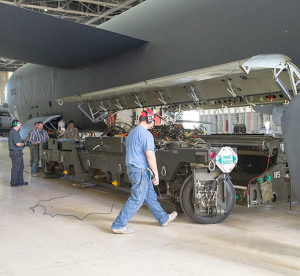 Team members from the 419th Flight Test Squadron, the Global Power Bomber Combined Test Force and Boeing installed a Conventional Rotary Launcher on an Edwards B-52H in December 2014. The upgrade modifies the internal weapons bay of the B-52H bomber by integrating a CRL that has the capability of carrying Military Standard 1760 “smart weapons.

Imagine the frustration of having a brand new rotary launcher, capable of carrying 16,000 lbs of smart bombs, and you discover that the dropped bombs potentially would not arm or explode on impact?

Imagine if the avionics computer, which is required to operate the weapons system, shuts down just prior to a bomb run?

These are just a few of the critical issues discovered by the 419th Flight Test Squadron while testing the B-52 weapons bay upgrade program. Many issues could have been missed or discovered too late for the program to survive; or worse, discovered by the war fighter in combat.

Prior to this added capability, hardware and software limitations restricted the B-52s carriage of MIL-STD-1760 weapons to external pylons only. The internal weapons bay was configured either with racks, which allowed release of non-MIL-STD-1760 gravity bombs, or with a Common Strategic Rotary Launcher, which held up to eight weapons.

The CSRLs were used to carry gravity nuclear weapons, the nuclear Air-Launched Cruise Missile and the Conventional Air-Launched Cruise Missile.
These weapons operated via a MIL-STD-1553 data bus, which was incompatible with MIL-STD-1760 weapons. The IWBU program provided eight additional MIL-STD-1760 weapon stations by modifying existing CSRLs and integration of existing B-52 equipment. The modified CSRLs were designated as CRLs.

Early on, the perceived “simplicity” of the system created discussion regarding the need or value of conducting developmental test. Fortunately, the decision was made to proceed with DT first.

During rigorous ground test efforts, hardware related deficiencies were discovered that needed to be corrected prior to the start of flight test. As an example, ground fit and function testing revealed interference issues between aircraft components and weapon arming systems. This vital issue was corrected, enabling proper functionality of the weapons after they are released from the aircraft.

The first flight was a weapon release to demonstrate safe separation. Four weapons were to be released. Captive carry flights were flown to test the overall system and its ability to perform simulated weapon releases with actual weapon hardware in the loop. These tests revealed several issues, one being a dynamic software anomaly that caused the offensive avionics computer processors to shut down as the aircraft was flying towards the target. System issues discovered in DT provided insight that supported two hardware fixes and three additional software versions.

While these discovered issues drove some schedule delays, this was far less delay and cost than would have occurred had these issues been discovered during operational test or after fielding.

Although the system will continue to be improved, the JDAM IWBU flight test program ended as a success.

The B-52 IWBU program in the near future will expand the internal smart weapon carriage capability to include Joint Air-to-Surface Standoff Missiles and Miniature Air-Launched-Decoy variants.

With expanded carriage of smart weapons, the B-52 Bomber will continue to be a valuable asset to the warfighting capability of the United States Air Force. Several improvements were made while in DT that improved the system and made ready for OT and the warfighter.

If the IWBU program had gone straight to OT, the program would likely been found unsuitable to the warfighter.

The opportunity to identify system shortfalls and implement corrections in DT was key to ensuring this capability reaches the war fighter as soon as possible.