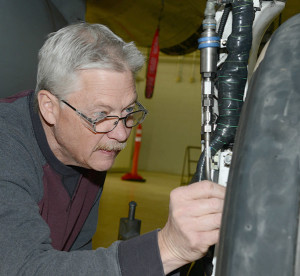 Steven Popolizio, a model maker with the 412th Instrumentation Division, applies temperature sensor tabs to the main landing gear of an F-15D Eagle. The sensors are part of the F-15 Wheel and Brakes System Improvement tests.

The Air Force’s F-15 Eagle fleet is scheduled to receive a wheel and brake upgrade after completion of flight testing at Edwards Air Force Base, Calif.

The Air Force F-15 fleet of more than 500 aircraft benefit from F-15 Wheels and Brakes System Improvement program by saving $194 million in F-15 maintenance costs by increasing number of landings to 1,400 between brake changes, reducing chance of brake fires and improving the braking capability of the F-15 C/D and E aircraft.

“I have overall responsibility for initiating documentation, planning, executing, monitoring and controlling, and closing of the modification effort,” he said. He also experienced challenges during the test process. “The designated aircraft was to be an F-15E model.  All design efforts were vectored towards that model,” Atkinson said. But no Air Force command could supply an F-15E, so the systems program office had to look to the Air National Guard, which was able to provide an F-15D. “The D model has much different landing gear and brakes, and the aircraft is configured differently than the E model with regards to production equipment.  So, the design basically started over very late in the process,” he explained.

Time constraints were probably the biggest challenge for the team.

“We were under constant schedule pressure … due to the imminent discontinuation of the production brake manufacturing,” Atkinson said. “With the design now way behind the curve, the modification schedule was under pressure to finish significantly under the estimated time.  Modifications almost never go exactly to plan because each aircraft is a little different, and unknown issues pop up constantly.”

Eric Biesen, lead flight test engineer with the 416th Flight Test Squadron also said that there were some unusual points to this test. 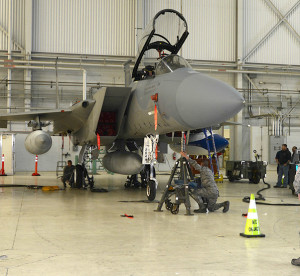 Members of several Air National Guard units prepare to lower an F-15D Eagle from its jacks after modifications and maintenance in support of the F-15 brake upgrade tests.

“(Wheel and brake) testing sounds like business as usual at Edwards Air Force Base, but this is new to the 416th,” he said. “We’ve been leveraging knowledge from engineers and technicians.” The F-15 testing was assigned engineers and technicians with previous wheel and brake testing on bombers and cargo aircraft. According to Biesen, there has been no F-15 brake testing since the 1980s.

Since Edwards does not have any F-15s, all parts and maintenance support had to come from organizations with F-15s. The project received support from the NASA Armstrong Flight Research Center here.

MSgt. Marty Nance, 142nd FW, is the production superintendent and crew chief for the testing. He said that the military members’ roles in the testing were primarily maintenance and support. “It’s kind of like being deployed somewhere,” he said.

Since Edwards technicians were not qualified to work in the crew compartment without the proper training, and NASA has F-15s, Armstrong Flight Research Center was able to support with the proper training. NASA also helped with physical support for the maintenance of the aircraft egress system. 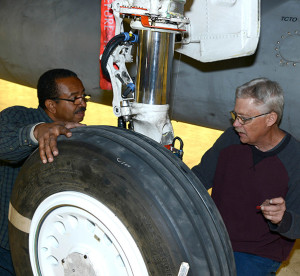 Rudolph Harris, an instrumentation technician, and Steven Popolizio, a model maker, both with the 412th Instrumentation Division, discuss the aircraft modifications while Popolizio installs temperature sensors to the main landing gear wheels.

Modifications for the testing were accomplished by 412th MXI. Engineering, instrumentation technicians and model makers were key players in this. Before the aircraft could even begin testing, it had to be fitted with measurement equipment to get baseline measurements. Sensors to measure hydraulic pressure, temperatures, and component positions had to be installed.

Charles Vatcher, the 412th TENG lead mechanical engineer for the project, said there were a few challenges in selection and installation of measuring devices. One such challenge was measuring the nose landing gear displacement. Typically, distance and travel measurements are made using a cable actuated potentiometer, but this only for straight-line measurements. Since the nose gear has compression, extension, and rotation (steering), another method had to be created.

“This was accomplished using an innovative laser distance measurement sensor and a reflector mounted to the lower nose landing gear strut,” Vatcher said.

What seems like miles of wiring also had to be run, and measurement and recording equipment had to be installed in an aircraft that was not designed to be fitted with this equipment.

Damon Hall, a wiring technician with the 412th MXIS, worked on F-15s early in his career.

“It’s been a long time,” he said. Hall is familiar with the aircraft, but he said that as a wiring technician, there were certain areas on the aircraft that were difficult to run wires.

“One challenge was the crew compartment,” Harris said. “There were no holes, so we had to find vacancies in existing connectors to run the wiring.”
Biesen said the testing, especially the conglomeration of people on the project, has been a great experience for him. This was absolutely a great bunch of guys,” he said. “The Guard support has been unreal.”

Atkinson agreed, saying “one bright spot has been the (Air National Guard) personnel that are here to support the jet.  They are friendly, willing and eager to do whatever it takes to get this testing done.”