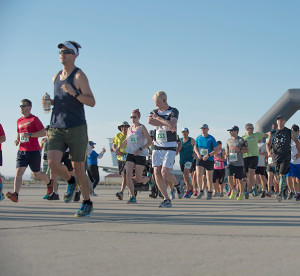 Runners begin their journey across the Edwards Air Force Base, Calif., flightline and Rogers Dry Lake during the second annual “Run with History” May 14, 2016. More than 400 people signed up to run either the half-marathon, the 10-kilometer, or the 5-kilometer courses.

Hundreds of runners gathered in the morning light on the Edwards Air Force Base, Calif., flightline to take part in the second annual Run with History May 14, 2016.

412 people ran either the half-marathon, the 10-kilomenter or the 5-kilometer courses, which took them out over Rodgers Dry Lake, as well as the inside runway and taxiways.

Race director Pete Smith, 412th Force Support Squadron, Edwards Fitness and Sports Center director, said the run was organized as a to showcase a healthy lifestyle, the Edwards mission and  how Edwards creates history every day just by accomplishing the mission.

“Thus the name “Run with History,” he said.

Putting together an event of this scale is no easy task. “We’ve been planning since September,” Smith said. And while it required a lot of work by everyone, “everything went great,” he said.

Brig. Gen. Carl Shaefer, 412th Test Wing commander, said “Today’s event was an amazing success. Hats off to everyone from making this happen.”

Exotic cars presented by the Ferrari Club of America’s Southwest Region, along with exotic aircraft presented by the 412th Test Wing, were added attractions during the second annual “Run with History” at Edwards Air Force Base, May 14, 2016.

Competitors were a mix of on- and off-base runners. Stephanie Speight made the trip to Edwards from Quartz Hill, California, to run in the 5K.

“The run was pretty cool,” she said. “It was very well put together.” She said the weather was a bit warm, but once she got to the halfway and turned around, the wind was in her face and it was nice.

This year’s event was augmented with 77 exotic cars from the Ferrari Club of America’s Southwest Region. According to Smith, this addition to the run was the brainchild of the new boss, Janice Hollen, 412th FSS director.

“It gave the runners something to do while waiting for family members to finish other races,” Smith said. The cars were also an attraction for non-runners to come to the event.